Times have changed oh so much. When I was a younger boy my bicycle meant total freedom. I believe I was about 8, when my parents pretty much turned me lose on my bicycle. I could ride about anywhere in my immediate neighborhood, which was about a 20 x 20 block area. I loved the taste of freedom.

When I was 10 or so I got the run of the entire city about a 30 square mile area. With one exception I could not cross the local 4 lane divided highway. Otherwise, I was pretty much on my own. I could set my own schedule; ride when and where I wanted and never report in. It was awesome. I went downtown, to the south end, all over my neighborhood, pretty much wherever I wanted to go. The freedom was incredible and I absorbed and loved every moment of it.

By the time I was 12 I could go pretty much where I wanted. I would wake up in the morning and off I would go. I would ride to nearby towns, and outside town to the local airport and even in different areas. I had one rule I had to be back by dinner. It was a hard and fast rule but it never cramped my style. I loved riding my bicycle. The wind in my hair (yes I had some hair) no helmet, no pads and few restrictions. I had to keep out of trouble and that was pretty much the best possible thing a 12 and 13 year old boy could want.

Today I am allowed to pretty much ride like that, if I wanted. Of course I am responsible to my wife, not for permission but out of courtesy and common sense. I still love to ride my bicycle but now it is not a bicycle, but a tricycle. Yeah you read it right tricycle.

I have a tricycle, (an adult three wheeler) because my orthopedic surgeon finally put an end to my listless wondering on two wheels. This happened after that same surgeon replaced my right hip. Because of rheumatoid arthritis (RA) my right hip had pretty much separated from my joint. It is hard telling when the joint separated, but leading up to the surgery, I had a tendency to fall off my magnificent two wheel bicycle. The neurologist said, the neuropathy in my feet and legs led to me unstable in on my bicycle. In fact the surgeon said that if I fell off again and fouled my hip, he likely could not but it back together.

So I had a basic choice stop riding or buy a tricycle. The one I got is well equipped with a basket, on back, a disk brake and three speeds. Unfortunately it is as heavy as lumber wagon. My basket is big enough to put a body in and carry it around for a few days, or enough groceries for a week. I carry my cell phone, a saddle bag with my billfold, change, apple juice mete, a kasha bar and few other essentials. All thinks I would never have carried as a kid when I rode my bicycle. In fact these (I have two) are commuter bags, capable of carrying a computer each. Not that I have ever put my computer in one. It is just nice to know I could if I wanted too.

Now the interesting thing about it is I get different reactions to my tricycle from other people, based largely on sex. You see I am embarrassed by riding it and I have not met a woman who didn’t say what a practical, good looking ride it is. I have only met two men who thought it was cool. Even my surgeon makes a little fun of the concept.

But in the end here is what I say ride like you love it, after all what else there to do but that. 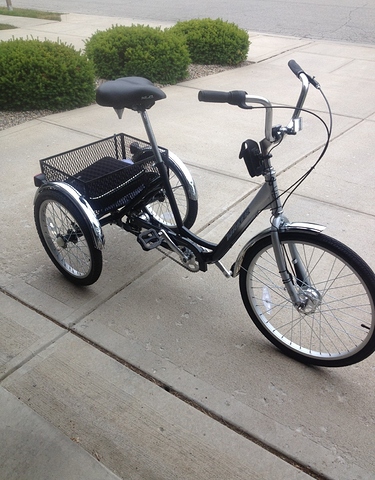 Three wheels is way better than sitting still. Glad to see you are still able to ride.

Good for you. Keep riding and the heck with what other people think!!

i love your bike. i too used to ride my 2 wheeler in france where i was born & grew up.

Hey I like it although I would recommend a NASCAR type paint job just to give it a manly look. You should feel no shame and ride on Brother.

Great bike Rick. I like! What are you going to name it??(ROFL)
Please, don't answer that. :D

I have 2 bikes,1 silver and 1 purple. I haven't been able to ride either
cuz of the stupid RA still biting my knees. I'm selling one for sure and hopefully someday I'll be able to ride the other again.

I'd be happy to ride in your back basket...taking turns with other bodies,of course. Enjoy your rides.