A quick question. I have had my dexcom for 2 days now, and my omnipod for a week and half. I finally thought that I had my blood sugars under control, because since getting my omnipod, by two hours after eating I’ve normally come down under 10 mmol/L (180 in American). But as it turns out, I’m still having spikes above that after meals. 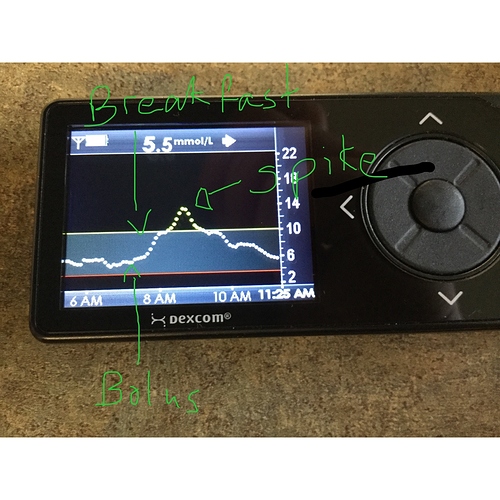 For example, here is my after breakfast graph. I bolused 15 minutes before eating, ate (2 eggs scrambled with celery, mushrooms, tomath, green pepper and the topped with fresh spinach, pesto and cheese) then spiked up to 14.1 mmol/L (254 mg/dl). I confirmed this with a finger stick (meter said 14.7). This pattern repeats after every meal and snack. I always come back down, but the spike is there. Is that normal? Am I doing something wrong? Or was I just not noticing these spikes before Dex?

What insulin is in your omnipod and how long do you wait to eat after bolusing?

I ran into the same issue when I got my dexcom and it led me to change my bolus timing to about 15 to 20 minutes before eating… but I have been using Fiasp today and am changing again to about bolusing right when I eat.

Edit: I was using Humalog until today when I switched to Fiasp.

I have apidra in my pod, freshly filled this morning. I wait 15 minutes before eating after my bolus.

Man I’ve been looking for Fiasp but I am having the hardest time finding a oharmacy that had it in vials and I don’t want to buy a whole package of cartridges just to try it.

Shoppers or Rexall can order the vials, I’ve been using Fiasp for 2 weeks now and it’s great! I had the same issue as you when I got my Dexcom and learned it is nearly impossible for me to eat most foods (at least what I like to eat) without a spike. The only thing I’ve found to solve it is the superbolus technique, where you suspend your basal for 1-3 hours and add the amount of basal you would’ve received during that time to your meal bolus. So for example if you are taking 3 units for toast, and your basal is 0.5 units/hour, you could suspend your basal for 2 hours and take a total bolus of 4 units for the toast. This is the only thing that’s worked for me, no matter how far in advance of a meal I take insulin. Let me know if you try it and if it works.

I wait 15 minutes before eating after my bolus.

Now that you have your Dexcom, you might want to try bolusing and then closely watching the blood sugar trace on the Dex and see how long it takes for the BG line to bend downward. It’s best to do this when you have some free time, like a weekend. Always keep quick acting glucose close at hand. If you feel differently than the CGM, do a fingerstick to stay safe.

A well-timed match between insulin and food is the key to avoiding an excessive spike after eating. Practitioners will often counsel a 15-minute prebolus, but this is not a one-size-fits-all parameter. You’re best off if you can do the test and discover what is the best prebolus time for you.

I discovered that my prebolus time in the morning is much longer than it is at dinner time.

Good luck with your new Dexcom. It will teach you a lot if you’re willing to pay attention.

Or was I just not noticing these spikes before Dex?

Probably. My CDE nurse warned me CGM results would not match my perception. I might go to bed with 5.7, be 5.3 at 3 a.m., and wake up with 4.9 and think I deserve the Best-Controlled Diabetic on Earth Award. But then you get your Dexcom and you see you’re actually up and down and all over the place in between those tests. The beauty of the Dexcom, of course, is that it reveals the spikes and dips and unique patterns you never knew you had, and so you can begin to tackle them.
@Terry4’s tip about bolusing without eating and seeing when your insulin starts kicking in is definitely one I’ll be trying. I find I spike regardless, whether I bolus 10 minutes or 20 minutes before. Yesterday I got interrupted and didn’t eat for 45 minutes, and I still jumped from 7.8 to 15.0 (and then was 4.7 before dinner). I look forward to squashing that spike.

That’s exactly the problem I was finding, the spike happened whether I waited 45 min, an hour, saw the bend or no matter how low my BG was before eating. The superbolus is the only thing that works.

I’m wondering if some of us have overactive livers that shoot out glucose everytime we eat something, causing the spikes. Your meal doesn’t sound very high carb and like the type of meal that would spike you that high that fast, and it would explain why spikes happen no matter how long food is eaten after bolusing.

And if you like reading - I found this Gary Scheiner presentation a worthwhile read. If you google “Strike that Spike Scheiner” you will find similar articles about controling spikes.

I have to agree with others who have said that the spikes were always there, but with the CGM you can see them and try to do something about them.

I usually manage spikes with prebolusing and avoiding eating really high GI (glycemic index) foods. But sometimes I eat certain foods and I can’t do anything about it.

I have been playing with Fiasp for the last two days. I bolus pretty much right when I eat and when I do a good at Carb counting, I am not seeing much of a spike.

I found Fiasp to be amazing with stopping the spikes the first few days I used it, but I was off work and thus very relaxed. When I went back to work I found spikes returned after meals, though definitely not to the same extent as on NovoRapid. I started using the superbolus again and it works remarkably well most of the time. This leads me to believe the spikes are caused more by liver glucose than food. Lower GI foods help as well but I’ve always found the spikes happen no matter what unless I superbolus.

Another possibility for the cause of after-meal BG spikes is an inadequate basal. I think of the basal insulin, when set well, as a solid platform from which to deliver the meal insulin. If the basal rate is set too low (even just a little bit too low) then the bolus insulin must first try to overcome the basal deficiency before it can get to work on metabolizing the meal. In that case your BG skyrockets and you might scratch your head and think your carb count was off or your insulin to carb ratio needs tweaking. If it’s set too high, then that can produce a hypo while eating or soon thereafter.

I’ve found basal rates often need adjusting. For me, they’ve not been a set-it and forget-it number. It took me many years to figure out the need to examine basal rates and change as needed. Just because they’ve worked for me in the past does not mean they will continue to.