Dropped the darn G4 now has 'bleeder' on screen

I dropped my receiver on a tile floor. It hit just right to cause a ‘bleeder’ on the lower left corner of the display. It appears to have no affect on the important stuff.
Does Dexcom allow for any human frailty in their product? Not sure what to do…
Thanks for any info!

I have no idea what you mean by "bleeder". But I sorta doubt Dexcom would replace a receiver if it's still functioning OK. And dropping it is not their fault.

On the other hand, I think these things ought to be built a bit stronger, so that they can survive a drop without damage -- who in the world has never dropped anything???? I felt like the 7+ was a lot sturdier.

So I don't really know what to tell you -- I'm not sure if the receiver has a warranty life -- if you get to the end of your warranty, then your insurance should replace it. I think that may be your best hope, but I don't really know.

Thanks, Natalie! I just got the thing a couple months ago. Kinda wondering if homeowners covers it… Still would have a $1000 deductible.
The ‘bleed’ is a squiggly line on a diagonal about a half inch from the lower left corner. It looks like the line has been pixelated. Anyway, it still seems to work, so I guess I’m freaking out too soon!

My dog chewed on mine several weeks ago. Luckily it seems to function just fine. Mostly there are a lot of little teeth marks on the very end of the side with the button. There is one little indent in the screen. She also chewed on my phone and a few ethernet cables for my laptop. I caught her with the phone battery in her mouth and luckily she will make a trade of a treat for whatever she has stolen so I avoided whatever damage to her mouth the battery would have caused. The phone functioned but would give me little shocks because the battery was exposed so I had to use an old one until I was due for a replacement. I don't think Cockapoo damage would be covered for either device! But I do think you should be able to drop it once in awhile without something happening to it. I drop my pump and my Dex all the time.

When I show my Dex to people I point out that not everyone has the personalized markings that I do!

Was your dexcom in a case when you dropped it, and more specifically in the case they provided ? If so, I'd report it to Dexcom, and they may replace it under warranty.

If not in a case, I think they could argue/point out you had responsibility.

However, the case they provided with the G4 is certainly not practical for many (see other discussions), but fortunately I found something that works for me, and helps protect my G4 when it falls (and it has).

Oh, MegaMinxX, what did you find? I remember when I used a minimed pump I found the best case at Dollar Tree! But, that was a number of pumps AND years ago.

My favorite is Riot Outfitters Armband for Sony Walkman. I got mine on clearance at BestBuy. I cut off the armband part, and used a marker to color the trim. 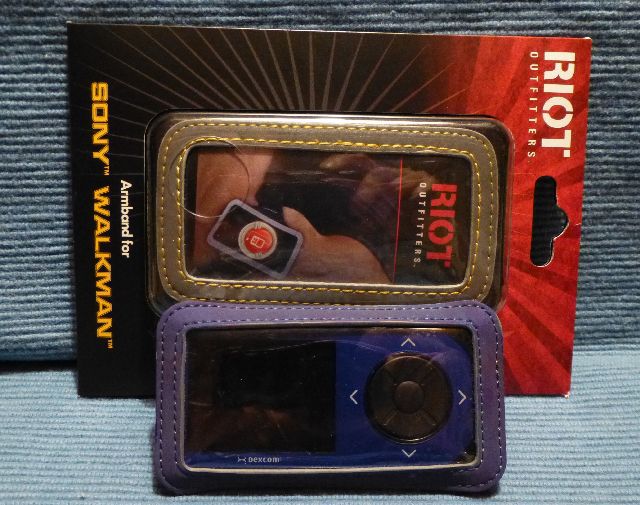 My other case is this Insignia one when I need a clip, that I got on amazon. There is an opening where the control wheel is that doesn’t quite line up, so I trimmed it a bit to match up for Dexcom G4.

Several folks have reported getting one from TallyGear, or other cases designed for MP3 players/phones. There were several discussions in Dec/Jan timeframe, you might want to check out.

On the off chance that you purchased it with a credit card within the last 90 days, some credit cards have a protection for anything that breaks in the first 3 months.
There are exclusions (such as when my wife dropped a $25 jar of honey when getting out of the car, they argued that perishables weren't covered: even though honey doesn't go bad ;-) but it could be worth a try!