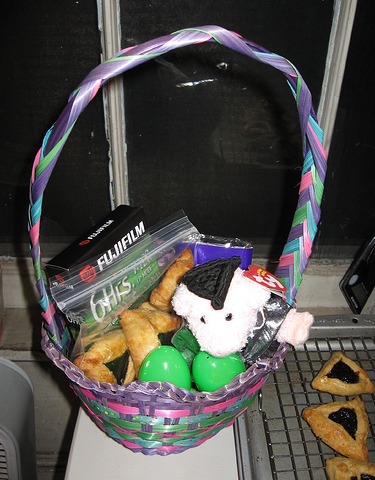 50d334c12545674e.JPG1944×2592 1.92 MB
This being one of those strange years wherein not only are Easter and Pesach not in lock-step with each other, but – due to the odd nature of the Jewish calendar – Easter actually coincided with Purim this year.

Easter: in which children are occupied by holdover Pagan traditions revolving around brightly-colored eggs, candy, baskets, and images of rabbits.

Purim: in which children dress up as characters from the (Old Testament) Book of Esther and eat triangular jam-filled cookies, and everyone makes lots and lots of noise when Haman – the villain of the day – is mentioned.

The key players in the Book of Esther are King Akhashveros, his advisor Haman, Queen Esther, and her cousin/uncle Mordechai. Esther and Mordechai are the heroes of the tale; Haman and his wife are the villains. King Akhashveros gets bad advice from Haman, but does the right thing in the end.

Growing up Jewish, one of my biggest spring envies was Easter candy. (I think I was in my twenties before I managed to find a Cadbury Creme Egg at a time where I could actually purchase and eat one.) On the other hand, Purim is a holiday for sweets. Particularly that triangular, prune- or poppyseed-filled cookie called “Hamantashen” (“Haman’s Hat”).

At some point, Purim and Easter merged in my mind. Perhaps it was an e-mail from my friend Patrick, soliciting companions to do an “Easter Parade” walk in costume. Perhaps it was an e-mail from my friend Bob, who hadn’t realized that Passover does not coincide with Easter this year. Or maybe both. In my “tradition” of “pun intended” costumes, I’d started sketching out ideas for a “Shutter Bug” and shuddering at the weight of such a costume. Then Pun met Holiday, and something broke loose.

First, Queen Esther met the Easter Bunny and became Queen Esther Bunny (or was that Queen E(a)st(h)er Bunny?)… didn’t get too far with that before the image of a pig (Ham) in a tricorned hat (Haman) overtook my mind. And then, G-d Bless Martha Stewart and the late Doctor Theodor Seuss Geisel, that poor little piggy morphed into a tableau of Green (Easter) Eggs and Ham(an)…

The punnery didn’t stop there, since I had already planned to run up an Easter basket for another friend, and I had also planned to send him some Hamantashen. The end result?

Follow-up: the Easter basket was delivered via my Other Half. My friend called later on that day and said I’d “made his day”.