Anyone care to guess what time my son woke me up to tell me the neighbor’s fire alarm was going off, what time I went next door and saw smoke inside the house, and what time I called 911 to report that my neighbor’s house was on fire? BTW just very minor interior damage, absentee owners so nobody at home.

I was perfectly flat 75-80 for many hours before the excitement. 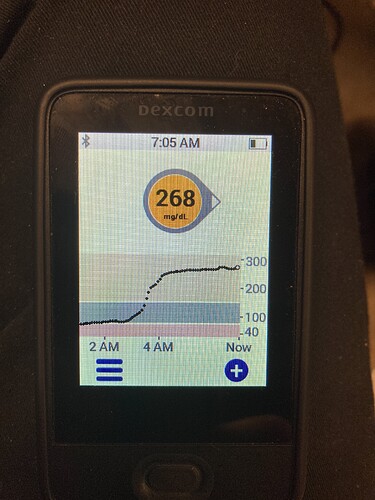 That’s pretty dramatic. I tend to be more resistant to corrections for those stress induced highs and take longer to come down.

Before I mostly didn’t believe it when others say they have stress-induced bg spikes.
In my case I usually had too many other food/insulin events going on that any such spikes were hidden. But happening in the middle of a very flat night… Now I believe it!

Last night when all the excitement was going on and my bg passed 150 I took the receiver out of my pocket, pushed 1-2-acknowledge, and didn’t have any desire to look at it since. I had disabled auto-repeat earlier in the week too.

I took a massive rage bolus and bg coming down nicely this AM.

My stress spikes tend to recover fast. I wouldn’t stay high like that.
His coincided with pre dawn time so maybe he had a double whammy.
He was also running really low there so maybe a tripple whammy if he had reactive hypoglycemia.

I don’t really have a mental model of how I (as a T1) would have a non-meal spike that would naturally recover without bolus insulin.

If I weren’t so dang tired from being up and outside in the middle of the night I usually would have responded to the beep beep alarm of going above 150, with a more timely correction bolus. But I was so dang tired and I didn’t look at my meter even when it beeped 150 except to shut it up.

When I first learned how to drive. later in life, my blood glucose would start out normal and it would be at 300 by the time I got to my destination.

Also right before an exam or the day before it would spike and be resistant to insulin and right after the test it would come down as if nothing happened without insulin. Very frustrating

My doctor always told me not to correct a stress induced high.
It’s true it will come down, however I always correct it anyway.
I really don’t know where that glucose goes if you don’t correct it though.
This has been a difficult to understand phenomena for many years.