I carry a purse – a diabetes story in 4 parts 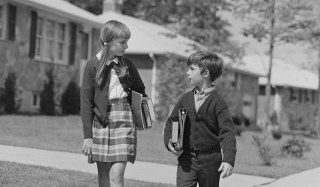 In 1974 when I was diagnosed with diabetes men were men and women were women and yeah, never mind, it was the same then as now. Anyway, when I was diagnosed men carried two items reliably, a billfold and keys. We carried change because what other good choice did we have? We are men after all.

At any rate, I swore I would never carry anything that looked like a purse. We (me actually I guess) could not imagine a male carrying a purse. We did not have book bags and only rarely did we see boys with paper bags full of books. If you believe this picture (I lived it so I do) girls never carried book bags or paper bags. Let’s face it, if girls would carry big stacks of books, then boys would never carry such bags.

Enter diabetes. In 1974, boys had to be sure and carry one of two things: 1. We needed glucose tabs (these were awful) or 2. We had to have $10.00 in our billfold for gas and lunch. (Gas and lunch being two separate things not lunch with gas). Being a boy and not willing to carry a purse I opted for the much more practical $10.00. Purses and boys were not all that compatible. Diabetes or not. 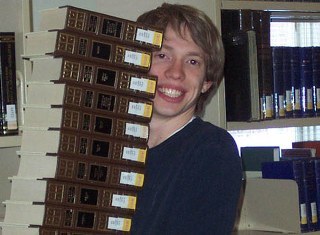 Glucose testing came along and with it pocket sized glucometers. Yes, I needed a purse if I were to use one of these things. Yes, they were big and clumsy and had long wait times with only slight accuracy, but they sure beat urine test strips. This was the moment of purse choice. If I were to use glucometer and use it like envisioned, would I carry a purse? No, of course not.

I may be lots of things, but soft willed is not one of them. I refused to carry a purse. Instead, I decided to forgo testing, lest I be forced into purse mode. Hanging on to my 1970’s vibe, I decided that a man needed keys, a billfold (now $20 inflation after all) and a front pocket for change. Ha, I was set forget that craziness of purse carrying. 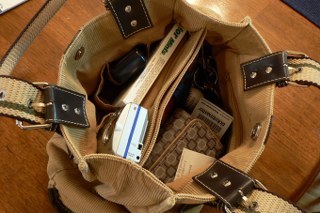 By the late 1990’s technology had caught up with me and I was carrying and using a glucometer. More specifically Sheryl carried my glucometer in her vacation purse. What you have never heard of a vacation purse? Let me explain, vacation purse is a big purse weighing a ton stuffed full of everything a family might need for a day or so. It was typical to find sun block, those special treats, camera, film (yes there was something called film) paper, pen, road maps, telephones, and for the very modern person with diabetes, glucotabs, apple juice, glucometer, extra pump supplies or syringes full of insulin. The list goes on and on.

What was rarely in vacation purse was anything related to the one carrying the purse. Let’s face it Sheryl could put whatever Sheryl was willing to put would put in her purse so long as all of our stuff got in. We (my sons and I), did not have to carry it around so heck yes toss another log on the fire, so to speak. The basic thing, was whatever we needed could be stuffed in vacation purse, let’s just say we were not in in tune with the issues involved in carrying a vacation purse. By the early 2000’s diabetes stuff grew in the vacation purse. Notably vacation purse included more apple juice, the meter and more syringes or pump supplies as the technology changed. 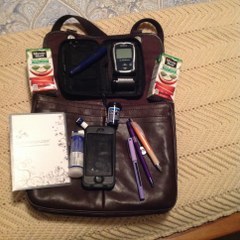 Over time vacation purse became not just for vacations anymore. It really included everything diabetes and not much else. It was about 2010 that the discussion of rick carrying a purse became more prevalent. My mind was made up (remember I said I have a tough mind to change) so we reached a stalemate. We discussed the topic off and on even as the junk I carried grew. I finally set a cut off. I told Sheryl I would carry a purse when I saw 5% of men carrying purses. I thought I was safe.

In 2014 the day came. I recall it like it was yesterday. Sheryl called from work and said she had observed at least 5% of men carrying purses. I have to mention here that Sheryl worked on a college campus so her perspective on what comprised 5% was a little less than objective. When I set the 5% limit I never said it had to be 5% of all men, and I think Sheryl found the loophole, she determined the population and the die was cast. However, I am a man of my word and on that day I surrendered to the idea. Once surrendered I had no choice but to carry forward. First a small little item that looked like a camera bag. I carried it for only two weeks, before I said look I need more style.

Thus came the real purse. And my blog about it all on TUDiabetes, which you can read here if you wish. The thing is I sort of like my purse. But before you talk about it, please do not tell Sheryl. After all, I do not want to get saddled with Rick’s vacation purse, a practice that I notice is creeping into my purse. LOL 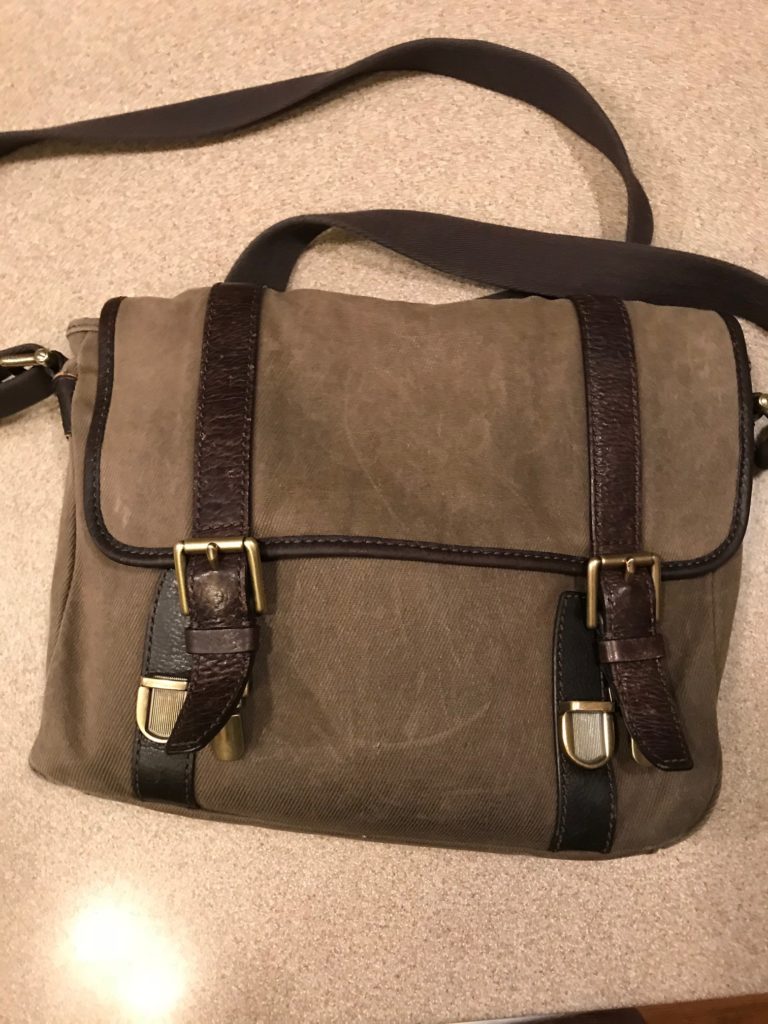 Hahaha, Rick would you just mind putting my hearing aid stuff in your (holiday) bag, oh and a packet of tisues and…

…a comb. Don’t real men carry a comb in Indiana? What did you do when DAs were all the fashion, real boys in the UK carried a comb and were always combing their hair into position and pulling that front curl bit down to the appropriate level? As in ‘Grease’, the musical.

I’ve always felt that men who carry man-purses are the most manly men!

There’s nothing sexier tha a man with a purse IMO…

I now carry a small backpack with a meter, iPad, Dex4, and Glucagon Kit. I cannot say I have always done this in the old days I carried nothing and had Bete’s supply’s spread out like bread crumbs, Work, Mums house, Brothers house (Brother is also a PWD), the car, and in later years I started keeping supply’s and insulin at my daughters house. I also wear HA and have never needed to carry any extra supply’s for them.

In the old days Men carried a wallet, comb, small pocket knife, handkerchief (I still carry one), some change, a watch, and if you used pins and or pencils you probably used a pocket protector with your work shirts. I carried my diabetes supply’s to work in a standard Black Thermos brand Lunch box…in most of the US that black lunch box was just about as sexy as it was going to get…

I go to lengths to carry the bare minimum with me. My current diabetes-to-go kit all fits in one hand, and comfortably in one pants pocket. I used to have a much smaller lancer but broke it and haven’t found another miniature one. This is all that I would carry with me if going out for dinner, etc. if not planning to eat, I generally don’t carry and D gear at all. Prior to the afrezza it was the same but with one novo own and a couple needles. 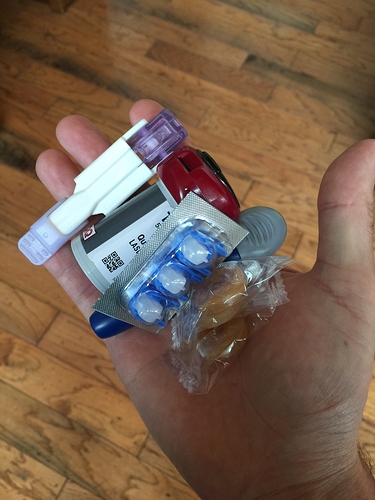 I will gladly carry your your hearing aid stuff and a packet of tissues, no problem. But shhhh we have to keep it quiet form Sheryl. LOL

Hey truthfully I never really carried a comb very much. I think I stuck my leg once too often , well and of course I have never had lots of hair, so the guy with no hair needs no comb?

See I knew I gave up on the bulging pocket thing for a reason. I mean her name is Sheryl but i knew there is a reason. Now I will add it makes me drop dead sexy, ahh ok, I get who I am talking about here. Me and sexy have just never gone well together. LOL

John for a bit I carried my items inside my car and at my fathers house. Until, my strips woudl no longer work one day. I did think of using a backpack as my sons carry for their items. i went messenger bag thinking it was be less stress on my back which already has spasms form RA.

Rick, I love my Adorn messenger bag, which even has a place to hold a little ice pack for insulin. Still it’s so darn heavy! My compromise is to wear cargo pants most of the time–without ice packs.

Trudy, good idea on the cargo pants. But sadly, I look like a 2 ton very big guy in heavy pants. LOL

I just go with a backpack looking book-bag for my stuff and try to look like a “too old” college kid. Fashion police have not busted me yet.