I have used both, Libre and Dexcom. Stopped using for various reasons but want to resume use but having trouble making a decision on which to choose.

I loved everything about the Libre 10 and 14 day except found them to be drastically inaccurate. The software was desktop and did not need internet which was a plus for me. It appears you must now use the cloud to upload your data. Abbott refuses to even entertain the idea that their product is not accurate and blame the lag between blood levels and interstitial fluid as the culprit. If that were the case, a graph of blood levels should superimpose over a graph of interstitial levels by sliding the graph of one over the other by 15 to 30 minutes in time. The reps act like the patient is just too stupid to understand the difference between the what is being measured by the Libre.

If the Libre had a way to “calibrate” it, I would find it to be perfect, in my opinion. But, the inaccuracies drive me crazy. Makes me think I am doing great when I am actually 30 - 40 points higher in reality.

I used the Dexcom 6 for a little less than a year. My biggest complaint with it is the separate transmitter from the sensor and the fact they do not expire simultaneously. The transmitter will not work after 90 days from initial start. Skip one day between sensors and you screw up the last sensor after one day’s use. On several occasions I needed to skip a day (or more) between sensors to have imaging done and then the timing of transmitter to sensors was off.
A few other obstacles for me with Dexcom are the need for two hands for application. The Clarity software is internet based. I am a stomach sleeper, so placement is a problem. The inserted filament has detached from the sensor and I had to remove it with a tweezer. It is no more accurate than the Libre unless you calibrate it for most of the sensors I used. A few were accurate without calibration.

If it sounds like I am leaning toward the Libre, I guess I am but very disappointed that I can’t get the desktop software to use with it. I do not have reliable internet connection which is why I have been out of touch on this forum for a long time. 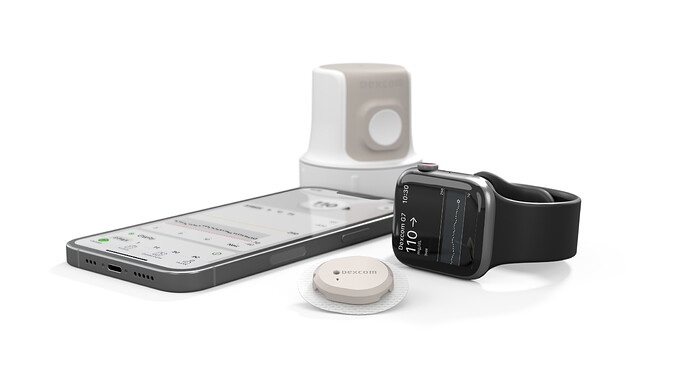 The g6 transmitter works for 110 days. Not 90.
I’ve had sensors fail and started new ones bringing me past 90 days many times. I think I had one crap out at 100 days.

I wear both now. I was a LIbre user from the first time it hit the US and loved it…until I wore a Dexcom. hands down because of the ability to calibrate the Dexcom is superior. I had no quarrels with the LIbre except it was always off, usually by the same amount and I used to just add numbers to it. But it turns out with the ability to calibrate and have a more accurate number, my A1c improved when I switched a to a Dexcom. And I could dose off of it much better. I also quickly learned to set the alerts for the Dexcom to before I went out of range to give me an early warning so I could catch it before I went out of target. So I have worn a Dexcom for years now.

But I retired and we moved to where I can snorkel, I could only stay in the water safely for somewhere between 30-60 minutes because conditions vary and sometimes I would come out of the water at 140 and sometimes at 70. I wanted a way to read my BG level while I was snorkeling and the Dexcom just won’t communicate in the water. I decided to give the LIbre a try because you can scan it and hooray, I can now snorkel for 3 hours plus if I want. I take hypo treatments with me and have been known to down them while I’m out in the ocean so I can stay out longer. The LIbre lets me know that, it completely scans underwater. The reader is in a waterproof Stash pouch as is my phone.

So I wear both, I self fund the LIbre and my insurance pays for the Dexcom. I wear the 14 day Libre and the Libre 2, I don’t care which, they both seem about the same in accuracy. But I don’t want or need the alerts and I had some trouble with a bunch of the Libre 2’s starting so I usually opt for the 14 day now. I have scripts for both.

But the Libre’s are still inaccurate, sometimes when I’ve gotten out of the water it’s within 5 points of my Dexcom and sometimes it 30. It doesn’t matter to me because I can see the trend of what my sugars are doing and that’s what I need to know when I’m swimming. But would drive me nuts now since I know that.

Because of the cost factor if cost is an issue I still highly recommend a Libre over nothing…but if you have a choice the Dexcom is so much better. I can calibrate my Dexcom so most of the time it’s only 5 points off in my range I like to stay at…the LIbre will not do that.

By the way, it should tell you a lot. As soon as I am home the reader for the Libre goes into my purse and stays there until I go snorkeling again.

some of the newer 8g*** transmitters used to work past 90 days, but my last one shut off at 91 days, like babs5 said…you can insert a thicker test strip towards the middle, you’ll hear a slight click, then slide it to the other side to eject the transmitter… there are videos out there, but you still have to start the sensor again and wait 2 hours…i was fed up with the inaccurate libre, libre2, and its inability to work with xdrip…tried the libre 14 day and bubble for a little while, but it always read 30-50 mg/dl lower than the glucometer, and calibrations didnt seem to fix it… luckily for me/my insurance, the dexcom is now at the pharmacy and is more accurate, so i still prefer dexcom, just make sure your drs are willing to do the prior authorisation games with the pharmacy

you can also try xdrip, which is not Internet based, works with os wear/Google wear watches, has up to 8ish different customizable alarms, and is my favorite since the g4 in 2016, rapidly high rising alarms and predicted low alarms are the best, and the xdrip watchface with the glucose, glucose arrows,time, date makes an enormous difference… some even use fitbit style watches…many people with Apple watches have to use sugar mate, but i prefer xdrip…and dont forget to look up changing expired transmitters with a test strip (i didnt find the credit card trick as easy and itll ruin the card)

You might think from reading Dexcom’s G6 material that the transmitter is good for 90 days, but really it is good for 100-110 days (always at least 10 sensors; on one occasion where I had to pull a sensor early, I got 11 sensors on the transmitter).

A couple years ago, for me the slam-dunk win for Dexcom over the previous generation Libre, is that it usefully alarms hypos overnight, which the Libre at the time could not do because it wasn’t really continuous connection, it required hand-scans.

With the new Libre 2 (which can raise alarms without having to be awake and scan the sensor) I think it’s more of a toss-up which one to choose.

The caveat missed thus far is that the G6 is WARRANTIED for 90 days. If it fails on day 89 and 23 hours, they’ll replace it for free, under warranty. You can start a new session right up until day 100, like day 99.99, but not after the clock flips over to the 100th day. So if you start a new session at the right moment, you can get 109.99 days. There’s always the chance that the battery runs out before that, but I’ve only had that happen once.

I do think the lines are blurring between what the best is. It used to be Dexcom hands down. People only really choose Libre because it was less expensive. But Libre is getting better and more expensive, and mother people are getting insurance coverage for Dexcom, so they’re sort of meeting in the middle. And the G7 is coming out very soon, which is very similar to the Libre form factor.

A few other obstacles for me with Dexcom are the need for two hands for application.

This confuses me. I wear the G6 on my arms, so I’ve only ever applied it with one hand. You definitely don’t need 2 hands. It holds itself in place after the adhesive backing is removed. You just need one finger to knock the protective guard off the button and press it.

I think the big deciding factor is whether you ever intend to use it with an insulin delivery system. The Libre 2 was specifically forbidden to be used with automatic insulin dosing systems, so Dexcom is the only viable option of the 2.

If insulin automation isn’t a concern and your favorite thing about the Libre was the longer wear, then you might want to consider Eversense, too. That’s the 180-day implantable one. It has to be installed/removed by your doctor, but it’s 6 months wear at a time. It’s not completely maintenance free, though. There’s a removable transmitter that sits on top of your skin which needs charged periodically. I don’t remember off-hand how calibrations work with that one, but I believe they’re required.

The alerts for the new Libre 2 aren’t that great unless you use a different ap for it on your phone. Because the Libre is so far off, if you set the alert at it’s lowest setting, you can get woken up when you are actually at 80-100. There is one high alert and one low alert and you can turn them off if you want. A separate ap can help with more alerts and more information than the Libre itself.