Hi,
I am new both to this site and also relatively new to LADA. I have been sick with a sinus infection/ cough and was prescribed both Advair, and Clarithromycin. And now my BC is ridiculously high. Fasting, After bolus with meal. Middle of the night. After and during exercise.
When I corrected for a high, I crashes to lows.
Is this “normal” and what is the best way to handle it?
Thanks

Yes it is normal in the sense that illness is often accompanied by high BG readings. Basically any sort of stress, physical or mental, can elevate blood sugar, and illness is about as physically stressed as you can get under normal circumstances. So, yes to that. Nothing out of the ordinary there.

As far as what to do about it, the answer is pretty much the same as for any other unusual BG event: test frequently and correct as needed until things settle down to normal again.

And don’t feel singled out. We’ve ALL been there.

thank you so much. I helps to know I am not the only one with the weirdness

this may help you work out your correction factor too. A workbook (the certificate ran out but the site is safe)
http://www.bd.com/us/diabetes/download/insulin_adjustment_workbook_complete.pdf 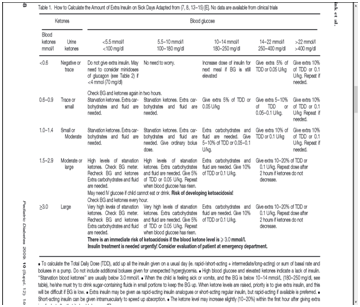 At a fairly educated guess, the problem may go back to Advair, which contains fluticasone, which is a steroid. Not sure in detail how it compares to cortisone, but the latter is notorious for playing hob with BG levels.

on edit: Google “Advair” and “blood sugar.” Short answer, yes, it can screw up your BG.

Worth adding that physicians can be remarkably ignorant about the particular subject of steroids’ affect on BG. First time I encountered it, personally, was when I had a cortisone shot for arthritis in my shoulder. I was on R/NPH back then (uggh, shudder) and had NO idea why my BGs were suddenly hanging out up in the Everest base-camp zone no matter how hard I pushed back at 'em every way I know how. Fortunately my PCP at the time had a subspecialty in diabetes and tipped me to it when I panic-called him. The orthopedist was shocked when I told him about it. This was all a while ago, but I’ve seen a number of posts about it here on TUD, so it’s apparently still a blind spot for some Dr’s who really should know better.

on edit: Google “Advair” and “blood sugar.” Short answer, yes, it can screw up your BG.

Hmmm. I periodically take Symbicort (same as Advair, different brand) as well as Pulmicort (another steroid), as well as other random steroids like creams and eye drops on occasion… I was told that it didn’t really get into your system the way steroid pills or shots do, so it shouldn’t really affect much. But we all know doctors can be wrong…

Oh yes. Absolutely without question. Steroids are legendary for wreaking havoc with BG. No question whatever.

I would also note that the information on Clarithromycin says:

Diabetes patients - Clarithromycin may rarely affect your blood sugar. Check blood sugar levels closely. Ask your doctor before you change the dose of your diabetes medicine.

You may be the rare one. It might also be worth talking with your doctor about whether a different antibiotic might be appropriate.

Seems it is also a blind spot for those who diagnose and prescribe for PDW, and are the ones who have been helping me to control it. Not to mention the effects of combining Advair calithromycin.

Worth adding that physicians can be remarkably ignorant about the particular subject of steroids’ affect on BG. First time I encountered it, personally, was when I had a cortisone shot for arthritis in my shoulder.

I recently had a … lengthy “polite disagreement” with a Fellow who was following a local hand surgeon. He was insisting that my carpal tunnel wasn’t that bad and that I should just get steroid shots. Two neurologist had already suggested going straight to surgery because I was diabetic. He just didn’t believe that the steroid shots would send my blood glucose levels sky high, possibly for weeks on end. Thankfully when the surgeon actually came in to follow up his initial examination/diagnosis/recommendation… he told him how it is with diabetics, and that I was right.

With my one experience of it the effect lasted about three weeks. Never again!