Omnipod - get the current version or wait for upgrade

I am currently on MDI (Novolog and toujeo) to manage my diabetes. I was thinking of switching to insulin pump in near future. Started using dexcom last year and liked it which makes me think I would like omnipod too. Tried the demo version of omnipod and was interested in getting that. Got to know that omnipod is planning to release a newer version by end of 2017 which will have an android based smaller PDM. Question is should I get the current model or wait for the upgraded model. I understand that this is a choice based thing but still wanted to get views before I make this decision. I checked with insulet rep and they don’t have a road map for upgrade program yet as it is yet to be approved by FDA. So they don’t know what will be the policy regarding upgrade for existing users at the time of release.

Are you in the US? If so, the current PDM is cheap - $300. The newer one may not be that cheap, we don’t know. If that’s the pump you want, and you can afford it, why not get started and see if you like it. Rather than waiting and possibly spending more to find out.

I’ve said this before on a different post - if you always wait for the newest model with all the new features, YOU WILL NEVER GET ONE!

But of course it’s your money and depends on how patient you are. But since you are asking, I say go for it.

Also, the current PDM has been around a while. It’s stable. It’s quirks are all well known. I think it’s safer than getting a brand new version.

I am in US (Virginia) and thanks for your inputs. Will make up my mind if I want to wait or go for the current one. If i get a pump i guess it will be omnipod (being tubeless)

Maybe a deciding factor is your health. Are your BGs generally within target? Is your HbA1c in a good range? Do you have any complications yet? Do you generally feel in control of your diabetes? If so, there’s maybe no real rush. You can wait. And wait, and wait, for something smaller/smarter/flashier – but there will always be something new on the horizon. There’s always a smaller/faster phone coming in a few months, a bigger/brighter TV, a more powerful food processor … but that hasn’t stopped you from getting one or more of those, I assume.

If you’d like tighter control now, though, and feel that tighter control now would help you feel in better health now and prevent complications later in life, then maybe get whatever pump appeals to you now. You can always upgrade later.

@breacher: My BG’s are in target range (depending on whats target :)) in general. Last a1c was 6.4. Could have done better but last couple of months was lot of travelling. Dexcom has certainly helped me with better control. With pump i was thinking more in terms of convenience and avoid 3-4 shots per day.

When you say upgrade later, you mean by end of my warranty for this one right ? or is there a provision of upgrading mid way. My understanding is its similar to phone contract where in you can upgrade only after completing the duration.

Thanks for your reply.

Basic question: How does pumps help in tighter control ?

If your basal needs are not flat, such as someone with prominent dawn phenomena, a pump can be programmed to match a custom basal profile. I find my pump serves as a good record if I want to verify if/when I took an insulin dose. A pump permits extended bolusing so that you can deliver an insulin dose over many hours, a great match for protein and fat dosing if you limit carbs. If a pump is attached to your belt, you will not likely leave home without it.

You can simulate almost every technical advantage above using MDI, it just takes a little more effort and a better memory.

Thanks Terry for the information.

Basic question: How does pumps help in tighter control ?

I also find the flexibility with bolusing results in much tighter control. Yesterday I gave a correction dose of 0.05 units to bring down my BG, and you could never do that with an injection. When calculating a bolus, a pump’s ability to take into account the “insulin on board” (insulin remaining active since your last bolus) is huge, in my opinion.

I’ve only been pumping again for a month and a half, but the number of highs and lows has drastically reduced.

Yesterday I gave a correction dose of 0.05 units to bring down my BG, and you could never do that with an injection.

I actually did stuff like that before I ever got on a pump. I used the diluent made by Lilly Pharmaceuticals specifically for insulin.

For those who are unable to afford a pump or have problems with insurance, and want the ability to do micro-dosing, I encourage them to investigate this as an option. It’s not hard to do. I think people may just not be aware this is an option! 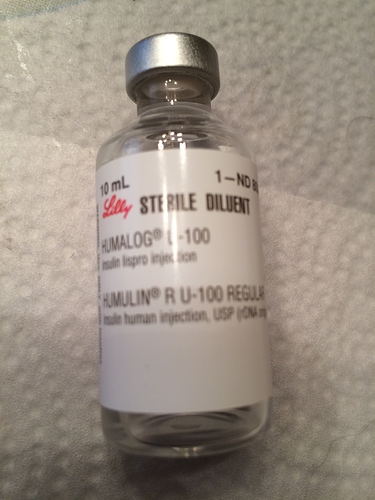 I think people may just not be aware this is an option!

Consider me one of them! I stand corrected.