Yes, and they'd probably be prescription today if not explicitly exempted back in the 50's.

I'd say pharma's doing alright for itself: 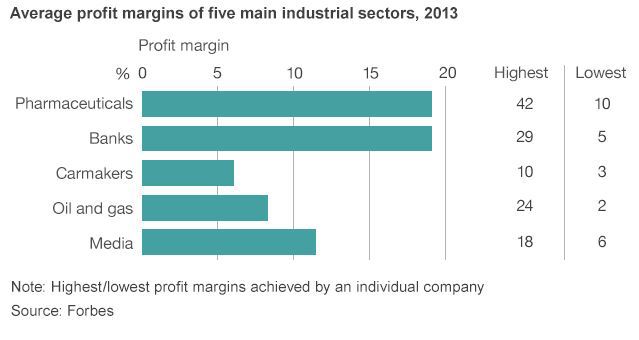 Yep. And instead of saying thank you, those foreign brethren then malign the pharma companies for ripping us off, evidence being the low prices in their countries. Average cost vs marginal cost is confusing to many people.

Developing these miracles is expensive -- VERY expensive. Manufacture is trivially cheap for most substances.

Compare the profit margin for pharma in the table above with the tech sector:

"The average margin for the tech sector, which on an annual basis is consistently among the most profitable U.S. industries, is expected to come in between 15% and 16% in 2014."

Sadly we passed the law with the intent that providing for a return on investment would encourage industry to innovate. Lilly produces Humulin and Humalog. It has been going on thirty years. Have we seen any new insulins from Lilly? If companies and industries like pharma are given "exemptions" like extending patents and prescription control they have an obligation to follow through with their side of the bargain.

In my state, I can buy long acting over the counter, but no short acting. I think there should be a permanent prescription for insulin in order to reduce overhead. It does harm, I believe, to require a new Rx every few months for a chronic condition. It puts up a lot of barriers to me getting access to something that I need to live. The Docs office and the pharmacy almost never work in successful tandem and I do wish that my ability to buy insulin wasn't dependent on their faulty computer records or bad communication between each other. Its always a huge ordeal to buy insulin, for me. It imposes too many additional barriers in a broken system that I have no control over. If you want to lobby for permanent Rx's for permanent conditions, I'm in!

Are you sure? According to what I've seen MN doesn't require a prescription for NHP or R. It may be that certain pharmacies have implemented policies, but I don't think there is any state law.

So its an age of insulin-thing, Thanks Karen. In MN they kinda put it in the hands of the pharmacy. Why do you suppose they do that? It boils down to state law and discretion by the pharmacies? Why would the pharmacy want to enforce that? I don't understand.

I'd wager the big pharma outlets haven't had an unprofitable year in 4-5 decades. They make about 17% profit and have been doing so for decades.

When I was on a trip to Bermuda, I had forgotten my pump supplies. This was 14 years ago. I was able to get Lantus without prescription and did not have to see a doctor. I had Humalog with me. I think it is a US thing that the newer insulins are prescription and the older ones are not. The cost is also astronomical for the newer insulins and some of the older ones - like UltraLente - are no longer available.

The pharmacist in Bermuda told me that insulins do not require a prescription in Canada either.

I think it is a US/FDA/Pharmaceutical arrangement....

You can kill yourself on NPH and Regular. They are both irregular in their duration. I had lows all the time on NPH. I know a person who blacked out while driving and killed someone and he was badly injured. This was before the analogues - which seem to be a bit more predictable.

Even with more predictable insulin, our body's demand for insulin changes throughout the day, so I wouldn't describe the system as a very 'predictable' one, although I know a lot of you disagree with me on that.

Kathy's list said its up to the pharmacy. I called and they said I could get NPH or R, no Lantus or the 'logs.' That's pretty good, better than I thought. That means that I could buy insulin without seeing a Doc. hmmm....It is my dream to withdraw from the hospital system completely. I think I would have to give up my drivers licence, but technically I could. hmmm....I like this post, very interesting.

Another thing to consider is that if you have health insurance and an RX, you will pay a different, likely quite a bit lower, register price than if you just roll in off the street looking to buy a bottle for R or N.

During a Caribbean cruise I had my insulin destroyed (long story) and had to buy new insulin in Mexico. It was sold in corner pharmacies, but I was worried about counterfeits and storage so I went into a large Walmart like store and they had everything there no prescription required. At the time I was on NPH/R and I actually had a prescription but non was needed.

I request the long story.

The story is here. I misremembered part of it, the ship gave me a vials of NPH and R and I had to only get more syringes. I was worried about what would happen if my vials went bad so I checked out the availability but didn't buy.