Theresa May appears to be wearing a Libre 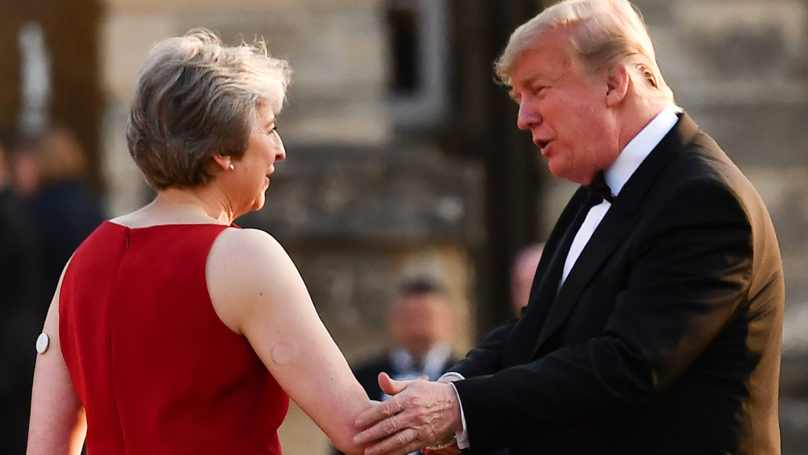 The prime minister attended a swanky dinner with the US president last night, but what is that thing on her arm?

One source or account called it a “diabetes patch.” What’s up with that? Has anyone ever seen a diabetes patch??!

Yeah, it looks like an Abbott Freestyle Libre. I’ve also read that she uses the Omnipod. It would be nice if the press cultivated some patient sources to answer questions like this. It’s better than just making stuff up. Diabetes patch?

Looks exactly like the Freestyle Libre that I wear!

Pretty sure that is a freestyle libre. You couldn’t get a better endorsement - well maybe if it were the queen.

I was hoping Theresa May would accustom the general public to the idea that not all diabetics are overweight, but people don’t seem to be noticing.

You can see the mark where she previously had it on her right upper arm as well as the Libre itself on her left. I’d say it’s pretty conclusive–I don’t think a 'shopper would have known/bothered to fake both.

It is definitely a Libre. Reported in the Daily Mail in January. I wrote to her to tell her she could use the Blucon or change to Dexcom and an aide could keep an eye on her and pass her a glass of Lucozade when she was going low. A polite note back but still just wearing the naked Libre:

You can actually see the marks of the previous sensor on her other arm. 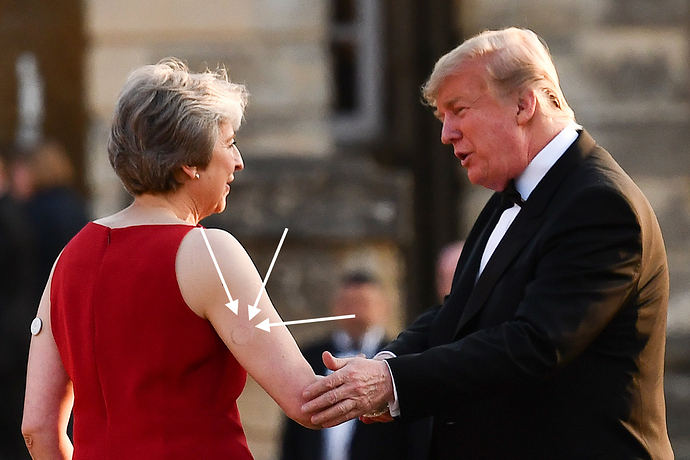 LOL @Mila - glad to see someone else like me that sometimes forgets to remove the ichy stuff from the previous site. She is human after all

Wonderful for Theresa May! Instead of bemoaning the fact the press called it a diabetic patch, I’m just thrilled that the Prime Minister of Great Britain wore a FreeStyle patch on her arm, visible to all attendees to a formal dinner!!! Yeah for CGM wearers and PWDs worldwide. I wouldn’t wish diabetes on my most hated enemy but if the UK’s PM can make it to a top post, while keeping her blood glucose in range - my hat and insulin pump is off to her. There is hope! I’d be interested in finding out if the FreeStyle made it easier for Madam Prime Minister to keep her blood sugar in control through the stress of Brexit? That would be a story.

I’d be interested in finding out if the FreeStyle made it easier for Madam Prime Minister to keep her blood sugar in control through the stress of Brexit?

Judging by the government’s current Brexit policies, you might predict that she has been consistently running at around 2 mmol/L (36 mg/dl). Might explain the fiasco that’s unfolding!

I found this topic interesting, so I googled May and diabetes and found that according to this site-

the PM was misdiagnosed in 2013 with Type 2 diabetes, but because she did not respond to oral agents, the diagnosis was switched to Type 1. At nearly 62 years of age, she was only then diagnosed with Type I? Couldn’t it be that her T2D was so advanced that it no longer responded to oral meds? I don’t know, just asking.

I suspect that with the top quality healthcare she would be receiving, immunological tests were performed on her to determine which type of diabetes she had. Though after having spent time in a National Health Service hospital in London, I can say that even the best healthcare in England is probably not very good.