Tips for getting started on a LC diet

Ragarding how things work; in my case I have had my medications adjusted many times. First time was only after two weeks. I have adjusted my meds nearly every third week for 1 1/2 year according to my test results. But that´s me. Thought you would like to know. Maybe this is just as individual as insulin needs.

Thank you for that information. You’re right, it probably is very individual, just like diabetes.

I got my A1c done yesterday and it was 6.8, which is amazing considering how volatile my blood sugar has been over the past several months. Of course, not enough time has passed for low carb to affect my A1c yet. My TSH was also in range for the first time, which can only be a good thing. 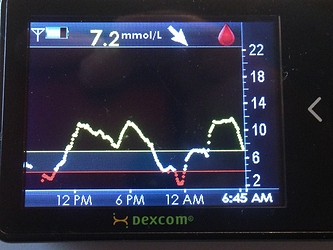 Still dealing with volatility even eating 50-60 g of carbs. Hopefully that and my weight will begin to change as time goes on!

How well did your A1c match up with your CGM and meter averages? Curious because my meter and CGM predict A1c’s 1% lower than actual.

It appears that your volatility persists even though your TSH number is in range. Good luck. Persistence is golden!

According to my Dexcom data, my average blood sugar over the past 90 days was 8.2 mmol/L. I think that matches up pretty well with an A1c of 6.8, though I don’t have a chart handy.

I think that my thyroid levels are still not entirely under my body’s control, since I’m still taking anti-thyroid medication. So, I think until it’s back fully under my body’s control, things can probably remain unpredictable (which I think is why blood work is checked every six weeks). I think that my levels vary day to day. After several weeks of feeling great, this past week I’ve felt quite bad, almost as bad as I was feeling before diagnosis (my T4 wasn’t measured, for some reason, so I don’t know if that was high). Today I’m feeling way better, and may be a coincidence, but my blood sugar so far has been fantastic. 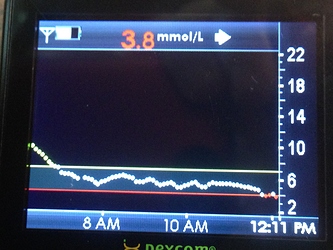 That’s just a reminder of what you can do when the stars align. Did your steady line evolve as a result of a correction dose?

Yes, I did a correction at around 5:00 am. My good luck has continued and it’s now 5:00 pm. I’ve had to make some basal adjustments and a few micro corrections and three glucose tablets at various points, but each time my blood sugar has responded as expected and stayed between the lines. If only every day were like this!

are you doing the ‘miss a meal’ basal test?

No, the above line is with eating.

I honestly would recommend you do the miss a meal basal test, to adjust your basal rates.

The problem for me is that doing the two or three days of missing a meal and adjusting my basal rates (because I would never adjust them based on only one day) yields results that last, at most, about a week before things need major adjustments again due to hormones. So I tend to feel like it’s just not worth the effort, especially after reading Sugar Surfing. If I felt like something was drastically off (going low every day at the same time or always spiking after the same meal), then I’d skip the meal to see if my basal needs adjusting. I do work on having a good overnight basal rate, though.

jen, i am so pulling for your continued success with low carbing and your monumental persistence. from what ive read over the last couple of years, you have got a lot of challenges with all of your allergies and other conditions! keep us posted and good luck today!! and tomorrow!!

Yesterday morning I forgot to take a couple units of insulin after waking up, which resulted in a big spike. When I finally got down, I ended up eating glucose tablets most of the afternoon in order to prevent and treat lows. Then, in the evening, I completely fell off track and ate about 60 grams of carbs. The past couple of days I’ve been eating about 30 grams all day (not including glucose tablets, heh)! I figured I’d take a ton of insulin and start over today. Did not realize it would result in over ten hours of running quite high even with that ton of insulin! Not sure why my body has changed so much, but wow, it’s definitely changed from a year ago. 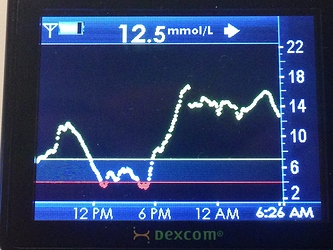 Back at it today. I read a book recently about forming new habits, and it cited a study that showed that it takes an average of 66 days to form a habit and that new habits aren’t formed in a linear fashion (people fall off track and get back on). I found it interesting in light of the dietary changes I’ve made.

Statistics for this week not looking nearly as good as last week. Not surprising since this has definitely been a week of highs, even though I actually ate fewer carbs than last week.

I’ve continued to gain weight over the past two weeks. I’m not sure how fast weight loss, or at least weight stabilization is supposed to happen, but I’m disappointed and am definitely noticing effects from it (none of my clothes fit without being tight, for example).

I don’t expect to lose weight so soon, but it would be nice not to gain a few pounds…

I have an endocrinologist appointment in two weeks and I’m actually thinking that I might eat a higher carb diet until I see him, just so that he can see that something has changed drastically. I can tell him that, I’m just worried that he’d look at my pump downloads and see that I’m not taking a ridiculous amount of insulin and my averages are good (and he considers my A1c to be good), and brush it all off as nothing, compared to if I go in there taking nearly a hundred units of insulin and high all the time, which is the current case if I eat around 100 grams of carbs a day.

That sounds really frustrating. Do you count calories too? I don’t lose weight on low carb alone. I’m trying to eat LCHF, around 20-30g carbs a day. However, sometimes I include things like apple and carrot, or sundried tomatoes in my salad which brings me to more like 60g carbs a day. Either way I can lose, but it’s only ever by also counting calories. I don’t find weight loss easy like I used to–it’s a lot of work now to even maintain. However, the recipe for me has always been lots of sleep, lots of water, low carb, counting my calories (to match the suggestion for my height/weight/exercise level) and lots of exercising. Jogging, rowing machine and long power walks seem to be the best for my blood sugar control, but I have added in some light weights too.

Good luck to you.

Thanks for the suggestions. This week I’ve been eating more carbs (about 60g per day, probably), and I’ve also started doing 30 minutes of swimming every day (in addition to getting about 8,000 steps on my Fitbit). I’m hoping to up that to 60 minutes every day, but the first time I did 30 minutes my muscles were exhausted after literally two minutes. I don’t count calories every day, but periodically I enter what I’m eating into my Fitbit app so that I can make sure I’m eating the right amount. I also track my sleep with my Fitbit and get about eight hours a night, sometimes a lot more (like ten or twelve hours) because I’m so tired.

Woohoo! I have fallen off this wagon in a major way, but I just made my first successful baking recipe EVER! I’ve tried baking about four recipes in the past and each were failures, mostly because I have to modify recipes and the modifications don’t usually work, so I gave up for a while. But if I’m going to make low carb work long-term, I really need to be able to make my own versions of foods I eat often, since a) it’s so difficult to find commercially-available foods that I can eat, and b) shopping takes me so much longer because I can’t drive and it takes me longer to find things in store.

This afternoon I made low carb bread with this recipe and it worked great and tastes good! I used this dairy-free spread instead of butter. I’m hoping to be able to use it for sandwiches (or just to put things like salmon on) and toast.

Agreed. And to answer one of Jen’s first questions, frittatas do keep for 5-6 days. I make one every Sunday evening–it’s my go-to, portioned, most mornings.