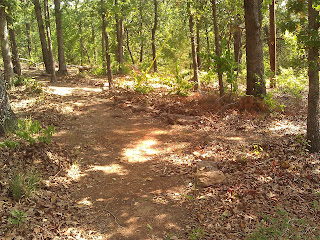 So out on our land in East Texas we have this big hill covered in oak trees and brush that has no rhyme or reason to it. My wife had the idea to create a meandering trail up the hill that also could be used as a mountain biking path. 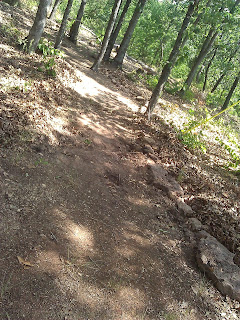 I had been to Philmont scout ranchas a boy with my brother and on one of our days we had to do a service project of working on a trail crew. Armed with my knowledge of building a trail which was clear everything back and move it to the downhill side of the path then clear out any rocks or vegetation from the trail I began my journey.

This has been so fun to date and with it being about 100 degrees everyday in Texas getting outdoors in the shade and working all day seeing my progress has been so rewarding. For my diabetes I have moved my basal rate down 50% during the morning work and not bolused after breakfast which has consisted of blueberry pancakes (read my earlier post about where I got the blueberries). Then in the after noon I eat a couple of high fructose corn syrup Italian ices, some leftovers from the night before, usually consists of some sort of dutch oven creation that my wife made consisting of rice, chicken, cream of anything soup, and assorted peppers from our garden in Dallas. I usually take a break around 4ish and have a couple more high fructose corn syrup﻿ Italian ices and have a 1 to 14 carb ratio bolus. All afternoon I have my basal rates as they normally run. 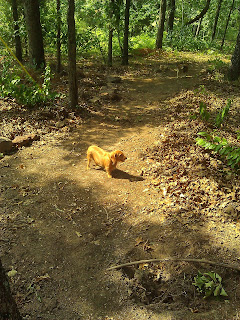 Now I am obsessed with building trails and my new game I came up with which I call it "Rock Hunting," where I am out on the hill looking for the biggest rock I can find and move it into position which is on the low side on the trail for erosion control. Part of the reason for the trail as well is to keep the hill which is named "Mt. MoMo" after our beagle since the hill looks like a mountain and it has a long ridge just like when MoMo rolls on her back her belly has a long bulging ridge to it.﻿ The hill is sliding slowly into Lake Zaine (named after my son) and I had some engineers come out to look at fixing the lake and the first thing they said was no matter what they did the lake would always need fixing until I stopped the hill from sliding down. With this knowledge in hand and my wife wanting a trail I decided a two for one, a trail that also doubled as a retaining wall that took the grade out of the hill. 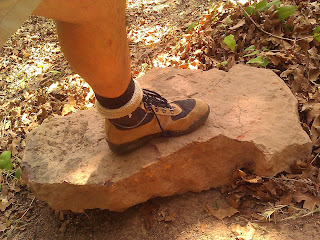 This rock was my biggest for the day while playing Rock Hunting. These rocks are interesting with their high amount of iron ore in them. Across the road we have a clay pit that gets alot of the red for Acme Brick company. The rocks don't register on my metal detector but they have an interesting mix of iron and sandstone to them.﻿ 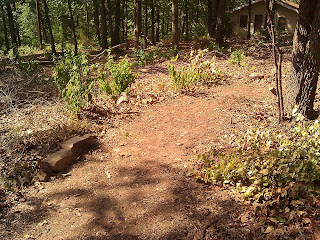 One of the few non shady spots on the trail. I am also trying to get grass to grow to hold the hill in place as well as the retaining walls.﻿ Cutting down select oak trees also gets me a good supply of fire wood for the winter. I have lots more trees to cut down. 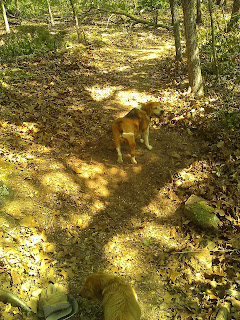 Another benefit of building this trail is the dogs have so much fun just walking up and down the hill and being outside. They normally just want to sit in the house and stay as cool as possible but now with the trail they are out chasing deer and barking at opossums.﻿ 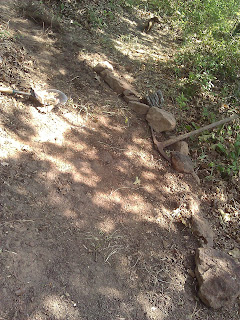 Here is my new (old school) favorite tool, a pick axe I purchased at a local auction for 3 dollars. What a steal of a deal. This is my favorite tool to use while rock hunting. I was using a shovel but I could tell that there was a bit too much stress on the shovel shaft when using as a pry device. Now with the thick shaft of the pick axe and its nice angle of the pick part I can dig and pry out all sorts of stuff along the trail.﻿ 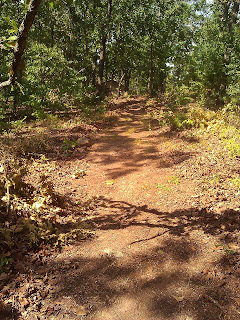 I have had people tell me I am crazy for doing this by hand when I can get a bobcat and a tiller to do this work in about a day. The point is not to build the trail as fast as I can but to get outdoors and naturally burn my sugars off while doing some cross training and the trail is the reward at the end.﻿ I think being diabetic we need to all work on ways to be positive because it is such a negative and slow battle with blood sugars, insurance, assorted complications, and counting carbs that if we sit around indoors thinking oh man I can't do exercise in this kind of weather or just thinking about issues with our disease. If we find a hobby that is at your impact level outdoors such as walking, gardening, camping, biking, games, or sitting in a swing we can have a positive impact on our lives being active and not sitting on a treadmill or doing cumbersome exercise that are more of a chore and we learn to hate. Outdoors gives us time to be at the most simple part of our disease with no distractions such as TV, phones, computers, and gaming devices. This trail has cost me 3 dollars for the pick axe, gas to our land, and food for the weekends but I have spent time with my wife, dogs and shed pounds while keeping my diabetes under control. Get outdoors and change your perspective on life and you wont believe the difference it makes on your diabetes.