It's been 8 years since I was diagnosed with Type 1 Diabetes. The anniversary of this came and went this year (March 22nd or 23rd, I don't remember which! Haha!) without my paying any attention to it due to moving and other insanities.

I don't 'celebrate' it or anything. I think that would be silly. However, I do reminisce.

My Dad had been on a wonderful mission trip to India. That trip changed his life, and our families life, and it was awesome. We kids, who had been Home-Schooled until that January were attending a "Co-Op" or Private School with other Home-schooled nerds like us. Life was going awesome. I loved being nerdy with other like-minded nerds.

While my Dad was away I started needing TONS of water through the day, always hungry, peeing as much as I drank. I was 14, so it was attributed as just 'normal teenager growth.'

I remember going out with my Mom, my 4 siblings, my Mom's bff and her 4 kids to McDonalds. I ate 2 Big Macs, fries and drank a TON of Soda. I had never been able to eat that much at a sitting, but no one thought too much of it. I was pretty skinny, so again, it was attributed to normal teenager stuff.

Then I got sick. I got really sick. Puking, Serious Shakes that were vibrating the couch I was splayed out on. Drinking and Peeing equally. I felt like I couldn't get enough fluids, but I also was puking whatever I ate. I didn't get off the couch except to pee for a week.

My mom didn't think much of it. She has 5 kids. Kids get sick and a week isn't so bad for a nasty bug. Yet, I wasn't getting better. I was still just as bad and not improving. SO, the trip to the doctor was made.

The trip where they checked my mouth, my ears, listened to my stomach, my heart... ya know, all those things they do when they are just looking for a virus. Not finding much they decided to take a little finger prick and asked me to pee in a cup. I was so dehydrated at that point it took me awhile of misery sitting in that room to finally do it.

A few minutes afterward the Doctor came back in. I was laying on my mom's shoulder, exhausted and feeling as crummy as it gets. I heard him tell my mom that I had lots of sugar in my urine and my blood sugar was clocked at 344mg/dl at the time. We should go home, pack some stuff up and head straight to the hospital emergency room.

I had no idea what was wrong with me, just that I needed to go to the hospital for some reason. Mom packed some things up for me while I just slumped in a chair while Mom filled Dad in on the sketchy details. Off to the hospital we went. I laid across the backseat in the van because I was rapidly feeling worse. By the time we got there, I just didn't care. I wanted to sleep, I was exhausted, I was thirsty. 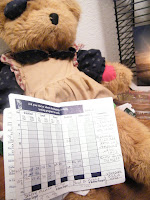 When we finally got to my room on the pediatric floor I just crawled into that bed and laid there while the nurses tried to get an IV into my severely dehydrated hand. The nurses gave my mom a backpack she started looking through. My mom showed me the cutest teddy bear that was in the backpack and asked me if I wanted it. Of course I did, I have a huge love for teddy bears even still. I cuddled with that thing all night while the nurses poked and prodded me. Come morning it was all explained to me.

The funny thing? I took it all very well. I understood all of it. I was really really upset about missing a fairly competitive tournament I was involved in that was taking place that day.

My Mom was just awesome. She helped me figure things out. Told me that my Grandpa, her Dad, was Type 1 diabetic too. When we got home she helped work out my dinners, measuring my foods out, weighing everything, buying things 'just for me.' She asked my opinion on what things I'd like to have for treating Low Blood Sugars. She was really concerned when I would have a high blood sugar.

The totally awesome thing? She let me spend the night at one of my best friends houses a week after I was diagnosed. She was also Type 1 Diabetic, diagnosed at 7 years old. It was a fun time getting to be with another that actually understood - she understood it all far better than I did at the time.

My poor parents were in for a roller coaster far worse just after that. I am grateful for my awesome doctors, my awesome parents and the awesome support I had through church - and my husband. My husband is my best friend and is always there for me. I love him, and I love that he can tell when I'm Low or High - even if he does sleep through the nasty Lows in the middle of the night when I smack him in the head trying to get out of bed.

It's been 8 years of learning and guessing and fun and crap. 8 years of growing up, Getting married, Becoming a Mommy. I am excited for many many more years to come!!

Glad to hear your story. You have a great attitude.