lots and lots of type on type 2 and how it will cause harm. but i have read little what type of harm or the severity.

for instance , at 61, and ranging from pre-diabetec levels to diabetic levels, FBGL around 120 to sometime 180 to 200 after meals,

what diseases do i risk and what is severity?

The probability of developing these complications increases at higher A1c levels. Worst case scenarios can be really, really bad, so it’s important to try your best to stay in range.

you made my point. what is uncontrolled diabetes? when do these affects kick in, after a day of 200+ BGL. a month , a year, a decade, or rather several decades of running very high BGL;s with medication? i have no idea ,

The problem is that it varies significantly from person to person. Genetics can play a big part in determining if you develop complications. Studies have shown definitively that people with high A1cs are more likely to develop complications, but there will always be the odd person who has a high A1c yet never develops any major problems.

Here’s a study that shows the blood sugar levels of people without diabetes: Continuous Glucose Profiles in Healthy Subjects under Everyday Life Conditions and after Different Meals - PMC 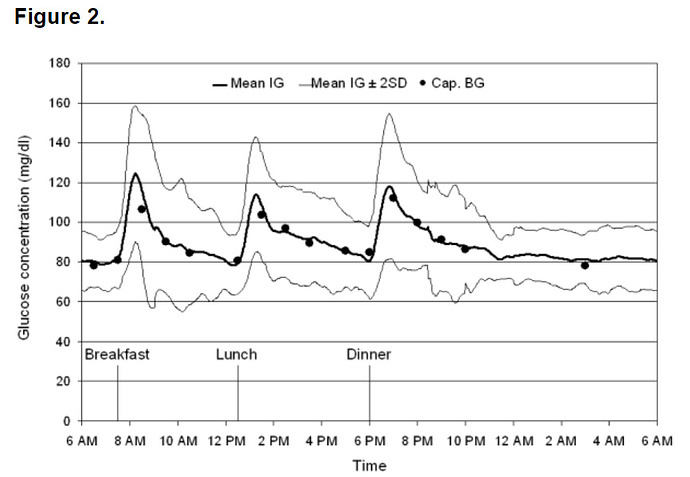 I’d aim for trying to stay in the same range- especially near the mean. That being said, don’t beat yourself up too much if you can’t obtain those numbers. Just try your best.

for instance , at 61, and ranging from pre-diabetec levels to diabetic levels, FBGL around 120 to sometime 180 to 200 after meals,

Some people use a technique called eat to your meter. This means you test your BG before, and 2 hours after meal, and try to keep it under 140 after meal. If not in the range you want, then decide what to change - less carbs, more exercise, medication change etc.

Some set goal less than 140 4 hours after meals or before the next meal, but this increases CHANCE of complications rather than guarantees it.

Ideally, Fasting and before meal BG should be back to normal range, 70-80.

Those diagnosed at later age will have less total years with diabetes, which could reduce chance of complications, since most develop as an accumulation of time in the higher BG range.

again i make the point. your info is confusing. if i i am somewhere from pre-diabetic to diabetic and everyone tells me to eat to non-diabetic parameters.

i don’t understand if everyone else is as confused as i am, but it seems to be an issue not well explained.

let me try again, if i am regularity testing in pre-diabetic ranges, to sometimes diabetic range, but close to pre-diabetetic numbers mostly, as defined by ADA and others:

is there a need to get on medication or does one , based on personal and familial history, live with those numbers?

and a complaint: when you say get down to 70-80 or adhere to non-diabetic numbers , you must always clarify. i have never seen these kinds of numbers because i never tested early in life. i have no idea if taking 200 metforim capsules or a drinking gallon of insulin would take a diabetic down to these levels.

so it is very confusing to tell someone who is pre-diabetic or even diabetic to get to non diabetic numbers or to use those numbers at all probably.

this criticism in not directed to anyone, it is the natural condition when people with experience talk to other people of experience and so can leave the rest of us in the dark.

i would not be making these comments if not that after of year of diagnosis i am still confused by just exactly what is being said.

if i am regularity testing in pre-diabetic ranges, to sometimes diabetic range, but close to pre-diabetetic numbers mostly, as defined by ADA and others:

is there a need to get on medication or does one , based on personal and familial history, live with those numbers?

I’m not sure what you mean when you say “based on personal and family history?”

Do you mean that you have family members who had the same “prediabetic” numbers but never progressed past that to Type II diabetes?

i don’t understand if everyone else is as confused as i am, but it seems to be an issue not well explained.

AFAIK - That is the state of things.

You certainly can get some people to give you absolutes and speak as if this is all settled medical knowledge. Personally if I hear something like that, I tend to further discount information from that source.

I have not read that this is settled in terms of the exact particulars.

This does appear to be well settled in terms of generalities.

Better controlled and lower BG would appear to be well established and accepted medical guidance.

Exactly what “control” and “lower BG” mean and exactly what complications will or may arise due to not adhering is (AFAIK) neither well established nor accepted.

The way we approach this personally is to do the best we can. I will not stress over us not having the level of control as somebody else. I will not worry about complications down the road. What we will do today is our best to do what we can reasonably do today. I also look for specific actions other people take which we may not be doing or perhaps are not even aware of which we can try to incorporate and see if it is beneficial. There are a number of things we have picked up from others which have proven to work quite well for us and have contributed significantly to better BG control and overall lower BG numbers. Certainly our approach is not going to work for everybody. But it works for us.

As an older individual, your pancreas might not be producing as much insulin as it did when you were young. 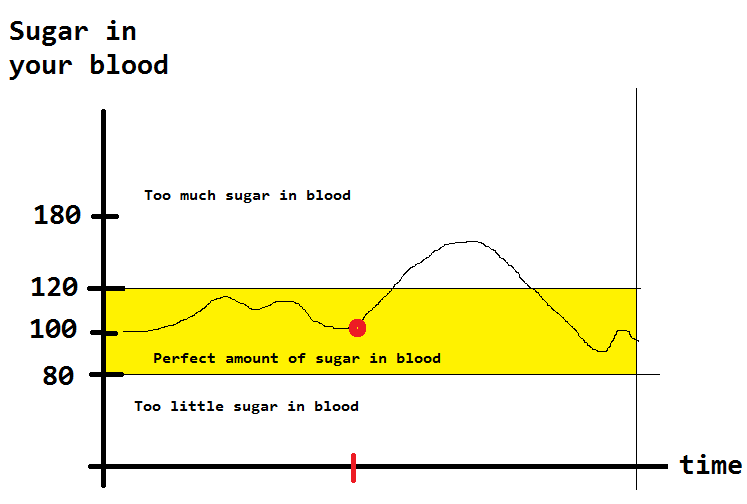 If you are eating at that red dot, then the amount of sugar in your blood increases too high.

This is a picture of what my blood sugar does when I eat and don’t take enough medication. (I eat where there is a picture of a loaf of bread and my sugar increases to 350, which is much worse because I am a type 1 diabetic and you are barley diabetic).

This is up for some debate, but if I were you, I would start a medication. They might recommend Metformin. Metformin keeps your liver from letting so much sugar get into your blood. Without medication, there is an increased risk of not feeling very well, heart attack, kidney problems, and vision problems.

Hope that helps…I’m a pretty ‘visual’ person. Pictures help me learn. I don’t know if you are like that.

This is a huge frustration for many. And as many have stated here, there are no hard numbers. Each one of us is so very different and everyday can be completely different doing the same thing.
That being said I have always felt that people being told they are “pre” diabetes are being hurt. Many feel it isn’t a big issue and don’t realize the damage that may be happening with elevated blood sugars. I think this is why many when they end up at the doctors with complications, it is because it wasn’t stress enough early on and years of elevated blood sugars does damage to all those small vessels and nerves. I hear it all the time that someone gets a type 2 diagnosis and a year later the complications set in.
So I think whenever a pre diabetes diagnosis is given, the patient should go through a complete work up, heart, eyes, kidneys etc. This way there is a baseline to work from.
My sister got her pre diabetes diagnosis last year and who knows how long it was there for. (Head in the sand situation). But she got a meter and really worked the diet and exercise focusing on the post meal blood sugars to see what foods worked best.
Sorry to say, you not find any rock hard numbers that will be “good or bad”, it will be what is best for you and what works for your situation.
Diabetes, no one answer that will work for everyone. And as we all know what works for one today, might not work next week. Good luck and just keep trying to lower the numbers. Having to go on medications is not the end of the world. You must think of them as something that helps to keep you healthy

personal and family history means no one,ever , in family had/has diabetes. how i got it, after exercising alot, i mean a whole lot of cardio, all my life, i guess could be based on large carb intake. that would be the only factor at play in my life.

I wouldn’t spend too much time placing blame on anything. It’s a complicated disease, and any number of things could have contributed. I wasn’t really asking about what might have caused your diabetes- I was mostly asking to see if people in your family had prediabetes that never developed to Type 2. Family history can be a good indicator of what you can expect. Though it sounds like that’s not the case here.

Your numbers are higher than they should be. I suppose the question is whether or not you’re concerned enough to start taking meds or change your lifestyle (you may have already done this) to attempt to lower your blood sugar levels. There’s no hard fast rule dictating when you become at risk for complications. If you’re still fairly young, I think it’d be worth starting on some meds now. It’s a personal choice though.

EDIT: I just read your other post. An A1c of 6.6% is firmly in the Type 2 diabetes range according to ADA guidelines: http://www.diabetes.org/diabetes-basics/diagnosis/. I’d take proactive measures now. 6.6% is not an alarming A1c, but you can reduce your chances of complications if you could get it closer to 6% with medication. In addition, you may be able to limit the progression of diabetes.

I am thin and very athletic (especially for my age). It is the Standard American Diet, in my opinion, in addition to genetics. I perform just as well not consuming GU packages, Gatorade, and preloading with pasta. Lots of fat keeps me going now.

LOL…As they say in the city bureaucracy—COIK: Clear Only If Known

Everybody needs to read a little Buddhist philosophy. I am fond of Pema Chodron, myself—down to earth and funny and a delight to read—or listen to online.

Diabetes is the very definition of Living with Uncertainty. There is NO certainty anywhere in this deal. Learning to live with uncertainty is a much more fruitful path…

No Certainty. So it goes…LOL…And even if you thought you had found it, you’d probably walk out the front door and get hit by a bus—LOL—so it goes, life as we know it!..Judith in Portland…

There is no such thing as “pre” diabetes. A silly dx. There is only diabetes. You’ve got it or you don’t. If you do, moderate your carbs and up your exercise until your numbers improve. And then keep it up…Judith in Portland

While my dad had T2 and so we could “blame” my T2 on that—I’m with Sally—it’s a scourge that is much too complicated for such simplistic examinations of cause. For instance, I was a professional dancer for 40 years. One might think that would stave it off. No such luck!..

Hello, it has many side effects.