Dilated eye exam VS only taking a picture of the eye?

I was wondering if any of you guys know what the difference is between having your eyes dilated and only having a picture taken of them. I had a full eye exam back in 2010; where they only took a picture of the veins and arteries in my eye, and they said all looks good. They said I don’t have diabetes. My doc has requested that I get another eye exam to have my eyes dilated and fully checked out. I’m kind of reluctant to do this though, because the eye doc is so far away. My A1C at diagnosis was 7.3 in 2014. I have recently gotten it down to 5.5. I will eventually get the exam though. The other post about yearly eye exams got me thinking about this again.

An ordinary picture, as I understand it, isn’t going to spot anything that they won’t see by just looking into your dilated eyes. Its only value would seem to be making a permanent record to which future exams can be compared.

That said, there is a procedure called fluorescin angiography which involves injecting a dye into a vein and then photographing the retina. it is normally done by a retina specialist rather than a regular opthalmologist and besides providing a permanent record, it is a more acute diagnostic tool—it’s more detailed and can detect things that a regular exam won’t necessarily catch.

Thanks for the info Dave.

I believe David is correct, mostly. A photo is a record of how the eye looks, it can be used for comparison. If you can imagine, if the doctor had a photo of the 2010 exam, they would be able to do a comparison of change or lack.

My doctor suggests that a high-quality photo is not as efficient as his exam because he can double check any irregularities. But the photo is more efficient for comparisons. In short, in his opinion, they are complementary procedures.

2010 was a while ago where the eyes are concerned. Things can change drastically in a matter of weeks. And sometimes with improved control, paradoxically the eyes can worsen for a while before they settle down again. You don’t want to take chances where your vision is concerned. If your physician believes dilation and an exam would be useful, I’d go for it.

As for pictures, my retinal specialist is fond of the OCT scan, or optical coherence tomography, in which you focus through a view-finder on a green star and the machine takes a cross-sectional image of the back of your eye, mapping the retina and optic nerve, and producing a high-resolution 3D image. Apparently it reveals things that a simple photograph, scan or naked-eye examination would not. This is done in conjunction with dilation and an examination by the specialist – the hands-on exam, I would guess, being just as valuable as any imagery.

@David_dns Wow, fluorescein angiography … there’s a blast from the past. Because it highlights blood vessels and leakages, doesn’t it have limited use, though? The hospital eye clinic I go to hasn’t done them for about 20 years. But I kind of miss them. I always wondered if I had the yellow fluorescein injection and then went home and ate red beets, would I pee purple?

Doing photo exam shows much more of the eye than having them dilated. The doctor can only look at an area at a time with dilated eye exam while with photo they are able to see almost the entire eye and view it all together. Also with yearly exams the doctor can compair the eye photo with last year’s exam and note small changes very easy which isn’t as easy looking back on notes written down.

fluorescein angiography … there’s a blast from the past

Actually they’re still very much in use. As with diabetes and every other aspect of medicine, the toolkit keeps growing. Each technique does things the others can’t do, or at least not as well, and each has its place. Randy Wong, M.D., a retina specialist who is also a TuDiabetes member, did an interview here about 3 years back in which he discussed them at some length.

Thank you all for the responses. I really appreciate them. I already have unexplained vision losses. I am 20/100 in my left eye and 20/30 in the right eye. I also have a slight Amblyopia. They kept on asking me what caused this when they found it in 2005. They wanted to know if I had some sort of accident that damaged my eye. It might be from an old blood clot in the eye seeing as how I have been diagnosed with two clotting disorders in 2012. I might skip the docs and go back to the Lenscrafters where they have the older pic of my eye and they can make a comparison there. My eyesight deteriorated in 2010 and needed a lot of corrections to my lenses, but they took the prism out as my eye had began tracking normally again. They said my 3-D vision has returned because of the prism. I need new glasses though, because they are all scratched up and the coating is peeling on them. I have effectively been walking around for the last two years without any glasses since I have not been driving. But I will have to get some new ones if I decide to drive again.

Keep in mind that there are vision issues, even without diabetes. I’ve had all of those tests with the exception of fluorescein recently. And in spite of being a 50+ year diabetic, no retinopathy has been found. However, exams HAVE picked up that I have macular degeneration. They also found that I have a narrow angle condition which could lead to glaucoma. So, I had a one-time laser treatment for the latter and get regular injections for the macular condition.

Early detection and treatment has helped all round. So, I’m of a mind that they can do all the tests they want to as often as they think necessary!

Just had that angiogram, on the computer next to me all of a sudden there was a giant eyeball.

The bright yellow urine after was cool too.

I’ve been getting eye examines nearly monthly for the last couple of years. I’ve had the angiograph initially which showed inflammation. At every exam they dialate my eyes. It is required to take the computer images of the retina. If the inflammation is bad I get an eye injection. The last couple of visits have been good and no injection was needed. Be careful about the dilation fluid. Once they used something too strong for my eyes and I ended up very ill, migraine headache and vomiting for a full day.

I do both once a year. Here’s a sample of a normal retinal scan photo. If the dr. find any abnormality, more tests are done. Once, the dr. found a hole in my retina. It was sealed using laser. Ouch! The photo will not show retinal holes. The dilated exam can reveal the retinal holes. 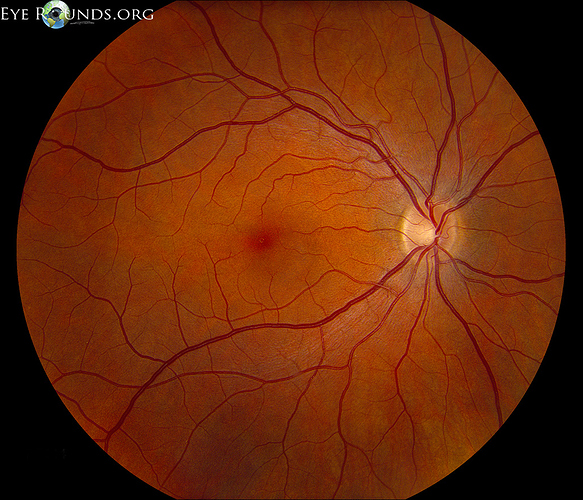 I hate having my eyes dilated. Even with a pair of dark sunglasses, the glare is incredible, it’s hard to drive, so I usually also wear the disposable eyeshields from the eye docs’s office. My eyes are dilated for longer than they swear they should be.

I know this thread had been dormant for a while but it popped back up and I just had to add:

They said I don’t have diabetes.

The quote I’ve heard from many opthamalogists: “No diabetes in that eye.” Well, maybe not there doc, but the rest of me has it!!!

I liked when they said I have no diabetes or high blood pressure in the eyes back in 2010. Now 8 years later I have it all. I still have to set an appointment for the exam though. I got a part time job and was buried in work. Now I’m free again while looking for an easier job and will get the eye exam. I have noticed my vision getting more blurry these days. I’m kind of scared to get more bad news so been fretting going to get the exam done.