I sure know it affects my thinking process and suspect it affects working memory, e.g., when I am trying to figure out the carbs/ounce in a different brand of juice drink when I’m low.

I don’t notice any change whatsoever in short term memory. I remember everything that happens when I’m low, even VERY low.

Maybe confusion in the moment, but nothing I don’t remember afterwards.

But would you know whether you forget anything if you can’t remember that you’ve forgotten something?

I have not heard or read any specifics about memory loss that happens during a specific glucose low instance, but it may well be because I have not read enough about it. My son’s cognition abilities are obviously affected during a low episode, but I cannot pinpoint a specific memory loss associated to it - middle of the night episodes don’t count:-)

On the other hand, I have read in general medical books on diabetes that repeated lows, in the long term, may cause memory loss. I have a hard time being able to give you a specific reference, but I just did a quick google search on “diabetes low blood sugar memory” and find several online sources that give the same generic warning.

It would be interesting to find some studies on the subject.

I used to know that. I forgot.

Are you asking about general short-term memory loss, or not remembering what happened during the low BG?

When I have extremely low BG, I have almost no memory of what happened during that time.

As for my general short-term memory loss, I just assumed that was from age…

for me, it does not. Unless I am asked what I did when I should have been doing something my wife asked me to do. But i forgot, then oh yeah big time. 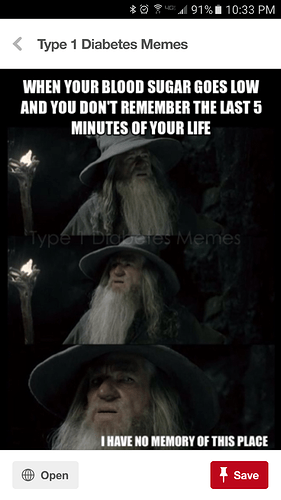 Yeah, that’s all I have. Personally, when I have a low that hits me quickly, I do tend to black out for a few minutes. Makes it really hard to bolus when I have no idea how many marshmallows were in that bag before I started!

If you have serious lows and suffer seizures then absolutely, your cognition and short term memory can be affected. Definitely try to minimize lows.

But would you know whether you forget anything if you can’t remember that you’ve forgotten something?

“If a word were misspelled in the dictionary . . . how would we know??” [Steven Wright)

Low blood Sugar, and High Blood Sugar can both cause memory loss…I had for the longest time high BG’s and it was causing memory loss to the point that I had a hard time remembering phone numbers, when to eat, what day it was, etc…now that I have been under control I’m fine…my Endo called it Hyperglycemic Induced Dementia…

Hi. I was told by my endo & the CDE that lows definitely affect brain cells. CDE said lows kill brain cells. (So dramatic, huh?) That’s why the prevention of lows is so zealous. I always thought highs were more dangerous because of the complications

Happy New Year to us all!

I was told by my endo & the CDE that lows definitely affect brain cells. CDE said lows kill brain cells.

At least I can put this fear to death! This study from 2007 seems to show that severe lows do not cause brain cell death.

I tend to feel a bit powerless as the father of a T1D, so this is making my day:-)

Something else that wasn’t known until a few years ago: the brain has its own emergency supply of glycogen, about 15 to 20 minutes’ worth for the average person. It isn’t much, and certainly not enough to prevent symptoms, but enough to keep the machine intact until corrective action can be taken.

Thanks so much for the article! I can’t wait to forward to the CDE lol So basically, the ditziness is an age thing!

That article is a very good read…initially, I thought both lows and highs kill brain cells but if the research done is accurate, the concern is for highs primarily:

"After adjusting for age, sex, education, length of follow-up, and number of cognitive tests taken through the years, the researchers found that episodes of severe hypoglycemia did not have any effect on participants’ cognitive abilities. They did find, however, that people who had higher blood glucose levels (or HbA1c levels above 8.8%) experienced some decline in two measures of cognitive ability.

These results show that consistently higher blood glucose levels appear to be more of a threat to long-term brain function than occasional episodes of severe hypoglycemia."

Of course lows need to be a concern as well however, the long term is highs from an internal organ perspective and cognition. Extra caution might be in order when correcting for a low (don’t eat 12 cupcakes or 10 Milky Ways

Highs can kill you over time although in the short term they are “harmless”. It’s just the reverse with severe lows. if you survive the immediate danger and don’t wrap yourself around a tree , the long term effects don’t seem to be that dire.

Highs can kill you over time although in the short term they are “harmless”. It’s just the reverse with severe lows. if you survive the immediate danger and don’t wrap yourself around a tree , the long term effects don’t seem to be that dire.

My Endo told me this a long time ago, which is why I have always tried to run “lean”.

I’m again too lazy to read through the entire topic (sorry), but I was told if you have many/severe hypos, it can damage your brain over the long period of time (10+ years of frequent hypos… I don’t know what’s considered frequent, though? I have about 1 per week, and they are quite mild, my lowest was about 50 once, usually they are not below 60)