I have used the Seven Plus for 3 years and now I'm using G4. I just did a finger prick to calibrate and the meter displayed 129. The G4 receiver showed 127. I entered 129 into the receiver and it immediately displayed 119. Shouldn't it display 129? Where did 119 come from? Similar situation happens every time I calibrate. Several times the meter and receiver agree exactly but after entering the same number into the receiver it displays another number up to 15 points different. For example, this happened last week--meter showed 91, G4 receiver showed 91, after entering 91 into the receiver it displayed 98. This has been bugging me since I started using the Dexcom but I just now got around to posing the question. BTW, I always try to calibrate when my blood glucose is steady.

The receiver applies a mathematical algorithm that looks at the history of readings from the sensor and the calibration numbers you feed into it from the fingersticks and attempts to do a best fit that will minimize error over an extended window of time. This may not translate into making the error zero *right now* - for that fingerstick. That's what accounts for the counterintuitive changes in the number when you calibrate. It's trying to fit a new equation to the sensor readings that will minimize error over the next, say , 12 hours - till the next calibration.

I see the same behavior. The dex readout is delayed compared to the BG measurement. Let's say the assumed delay is 15 minutes. The easiest way to implement the calibration would be to store the BG value for 15 minutes and then apply it. The dex would totally ignore any calibration for 15 minutes and then all of a sudden change to the BG value. Of course, this would be even more confusing.

I assume that the dex does the following instead: Given the rate of change and the current BG value, calculate the BG value that would have been measured 15 minutes ago, then apply this value immediately.

If BG measurement and dex readout are close I don't enter the BG value. I believe that I get better accuracy that way. I go many days without entering any BG values.

Many days? How is that possible?

Just out of curiosity, and to make sure I understand you - the Dex will *ask* you for BG values, but you don't enter them when asked, correct?

Chris,
You are correct. The Dex *asks* for BG values, but I don't enter them when asked.

HPNpilot: Great explanation! Thank you. A follow up question: On several occasions, for the 2-hour startup calibration when you must enter 2 glucose values, I have entered 2 numbers that are equal. On these occasions, the receiver can still display a different value. I would think that in this situation when there is no history, it should display a value that is the same as the 2 I entered.

I've seen that happen too... without DexCom publishing how the algorithm works (which they are unlikely to do as I am sure they regard it as proprietary technology along with the sensor) we can only speculate. My guess is that it is applying some weight to the reading coming from the sensor as well as the calibration inputs, even in the startup phase. Perhaps the information is disclosed in one of their patents ....

quick update... I scanned their recent patent applications quickly and indeed they have a large number of patents and applications in process that cover the signal processing and calibration of the sensor data stream. The sensor data, they say, is extremely noisy and is affected by things like temperature, local circulation, etc which perturb the glucose values. They have to figure out what's noise , what's real data, etc. It's not a simple linear curve fit to y= mx + b, nor is it a simple filter.

If I get some time to digest it, I'll see if I can make some sense of their patents and summarize.

Here some pictures from one of their 2010 patents that may help explain what is going on.... these are mjuch simplified from what is happening in the G4.

Here is their picture of the raw sensor data that they have to clean up. The raw data is the dotted line... as you can see , they have to figure out what is noise, what is not, and generate cleaned up data (the solid line):

Next, they have to convert the raw sensor data to a blood glucose number. They have some internal calibration tables that they store in the unit from what they learned in development. They augment this with the data you provide from your BG meter. Then they try to do a best fir to the calibration data. As you can see, the fit curve does not necessarily go through the input BG numbers exactly, but tries to minimize the error over a large time window. Every time you put in a new BG number, it may shift the entire curve around. In reality , it is not a simple straight line like this picture shows, but may use different fits in different ranges of BG.

Makes perfect sense! This raises another question--It would seem that the more calibration points you enter from your BG meter the better because the software would have more data to compute a best fit. Is that correct?

My experience is the exact opposite. The 7+ algo overfits which leads to bad predictions. I enter as few values as possible.

My experience is the exact opposite too! That's why I posed the question. The less calibrations I do the more accurate the G4 is. But based on HPNpilot's research and explanation it follows that more calibrations would result in better G4 accuracy. I don't get it.

As Helmut says, depending on the algorithm used to fit the calibration inputs to the data, overfitting is possible, which can increase the error rate.

Here is a picture taken from wikipedia that may help explain: 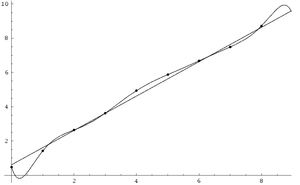 In the example above, a polynomial fit (the curved line) goes through every sample point, but may well be a worse fit (has more errors) than the simple straight line fit.

None of these examples probably match exactly what is going on in the Dexcom, but are simplified examples of what can happen in these kinds of problems.

Remember too, that your fingerstick measurements used to calibrate the Dexcom are loaded with error too - around +/- 20%. It’s possible that a fingerstick that is off from the true blood value can cause the Dexcom to be further astray. Noisy calibration inputs can throw things off too, in addition to the overfitting problem Helmut mentions. Over time, you hope the fingerstick errors average out… but a lot depends on the details of how the Dexcom uses the inputs, which we don’t know a whole lot about.

HPNpilot raised the pivotal question: How good is the finger stick value? I will never forget that for my very first calibration the 2 values were 90 & 130. Unbelievable. I had no idea that I to wash my hands. These days I only calibrate when 2 BG values are within 5 mg/dl. The dex does not know how good my BG input is. That is part of the problem.

When it comes to often to calibrate, I guess the bottom line is don't do it unless the Dexcom and your fingerstick differ by more than say 25%. Any thoughts?