Have Issues But Undiagnosed

I had issues with blood glucose since December. I noticed by accident that I feel rather bad after high carb loads, and measured something like 6.7 at one point. Also, had this acetone smell in my mouth. So, went to a doctor, fasting and hba1c was normal. I then insisted on endo. Endo did OGTT, I failed it. Then, he did antibodies tests (4 in total) that came back negative. Also did thyroid autoimmunity tests, negative.

I was discharged because I did not have huge BGs, and he thinks OGTT failure was because of the diet. And to reintroduce carbs. I did for a week, and my numbers were crap. Another doctor told me to eat according to a meter, so back to low carb it is. Now, a week ago, I started seeing larger spikes in BGs eating same meals each day. It is usually not over 6.5 but it never got past 6.0 just two months ago. In addition, exercise started raising my BGs instead of lowering it. Past two days were tragic: my runs ended after 10 mins because of excessive sweating, headaches and feeling a bit nauseous. I found BGs to be around 6.0 after exercise, slowly reducing in post-mortem. Before, they were in low 5s.

Basically, I did not fix my pancreas, or rather wake it from sleep, reintroducing carbs. But now, low carb causes more symptoms and higher BGs.

Any advice is appreciated. I thought I am in control for the past month but clearly something is up. I already contacted my GP but he known little about my case, and even endo seemed confused, so I don’t put much hope into it.

I’ve pasted a study below that measured the glucose levels of non-diabetics over a period of time. The measurements are in mg/dl though. Here’s a conversation chart from mmol/l to mg/dl so that you can compare your levels to the averages of the study’s participants: http://www.joslin.org/info/conversion_table_for_blood_glucose_monitoring.html 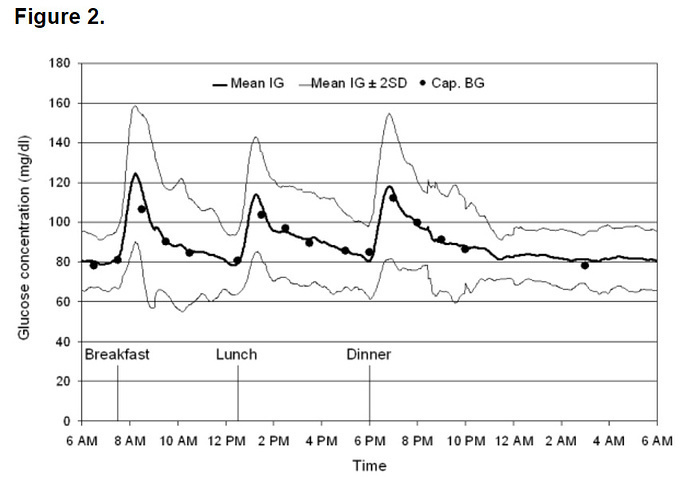 As you can see, the numbers in your post are very normal. I’m not sure why you’re not feeling well after meals, but I don’t think it’s related to diabetes.

I’m a little confused about why you’re testing your blood sugar so often. The levels post-exercise don’t really sound concerning to me either. The liver dumps glycogen during intense exercise, and it may take your body a bit to catch up. The levels you’re listing during exercise would not be concerning to me though… for a diabetic or non-diabetic.

If you’re not feeling well during exercise, it’s likely due to something other than diabetes- diet? maybe just need to get back into shape? or some other condition?

Nothing in your post shouts type 1 or type 2 diabetes. Just my opinion though.

What did you think your blood sugar levels should be?

I kept track of it for a while and know what was normal for a few months. I usually hover around low 5s. When I ate foods low in carbs, I never exceeded 6. When I went for a run, I always stayed in low 5s and never had liver dumps.

Now, I get headaches and sweating as in high blood sugar, and for me high is anything above 6 which never happened just 2 months ago.

I am testing because while my endo did not diagnose diabetes, he told me to try to get back to carbs and see what happens. Well, after 2 weeks, my pancreas did not restore its ability to process carbs, spikes over 10 were common. So, I got back to low carb eating and have had a slow decline in BGs eating same meals.

I am inclined to get back a doc and report this because normal people can process carbs after low carbing and I can’t anymore, even low carb now raises BG higher than a month ago.