I just started Lyumjev a couple weeks ago and feel like my hunger is out of control. I’m curious if others have noticed that. I have had skin irritation while using this especially when I bolus but I have read that is pretty common but couldn’t find much about hunger. Thank you!

Insulin makes you hungry. I noticed it a lot back when I first started on it. I haven’t tried lumajev but it makes sense.
It will likely subside after a while.

I just started Lyumjev a couple weeks ago

Did you switch from a different insulin, or is this your first start on insulin?

If first start, talk with doctor about switching brands.

I’ve actually been on Humalog for a really long time.

I’ve actually been on Humalog for a really long time.

Can you switch back to humalog?

This study indicates site reaction/irritation is quite elevated compared to Humalog:

A Study of LY900014 and Insulin Lispro With an External Continuous...

A Study of LY900014 and Insulin Lispro With an External Continuous Subcutaneous Insulin Infusion System in Adult Participants With Type 1 Diabetes - Study Results.

I just started Lyumjev a couple weeks ago and feel like my hunger is out of control. I’m curious if others have noticed that.

I’d be interested to hear more. I don’t know if very many people are on Lyumjev yet—this is actually the first I’ve heard of it. I’ve never experienced hunger from insulin, per se, but certainly have from experiencing a hypo, like everyone else. Are you saying this is occurring before you actually see a drop in your BG? Do you use a CGM (which can lag 15min. or so behind finger-stick BG values)? The onset seems significantly faster even than Fiasp, which I’ve been using for a year or more. Maybe that could be triggering a hunger response even before actual BG levels drop.

Welcome to TUD, btw–hope you stick around!

@Paytone is the only other person I’ve seen talk about using Lyumjev here. I have seen a few others on other media, but not many. As far as I remember, they’ve all reported site irritation, some worse than others. This hunger thing is a new one to me, though.

I was really excited about Lyumjev, since I’ve got pretty slow absorption with Novolog and Humalog. Was eagerly waiting for it to get added to insurance formularies. It looks so good on paper! Unfortunately, I haven’t heard anything positive about the user experience, aside from the speedy absorption.

I am also on Fiasp and at my last appointment, my endocrinologist suggested I research Lyumjevv as it has been reported that it Is faster acting than Fiasp. Unfortunately, he didn’t have a sample to give me. I called my prescription plan and was advised that Lyumjev was not currently approved for coverage under my plan.

I know for me, rapid drops in blood sugar cause hunger. If this is doing that because of its faster action, if blood sugars are still going up after food but then coming down very fast, that could make sense. Or if it’s used for corrections, it could cause hunger.

i’m also now on this one. it was given to me after my last blood test this week that my results got worst by being on humolog compared to my past results from novolog, actually my a1c which was alwasy int he 6 to 7 almsot hit the 8 . so for that reason, i had to do something drastic.

@Carrie26a and others, It took me forever to find what I was looking for. Lyumjev is faster and peaks higher than Humalog. It also diminishes faster. My question for you experiencing excessive hunger is, are you testing BG when you have this hunger. It is possible that you are going a bit hypo at the peak. This is just a thought, but something all who have been changed to Lyumjev from another rapid insulin should consider.

My first problem with regular night time hypos was when I was only taking Lantus at night. The hypos would happen close to 6 hours after injection. I began to suspect that the basal rate of Lantus wasn’t as flat as advertise. Looking at graph there was indeed a slight rise around 6 hours. I began splitting my dose 2/3rd at night and 1/3rd 12 hours later-voila! no more 3 AM hypos.

Here’s a graph comparing Lyumjev (I hate trying to type that) with Humalog. Notice high fast and high the Lyumjev rises and how quickly it dissipates. 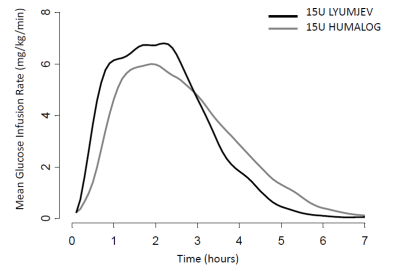 The studies I’ve read said that it should be dosed unit for unit the same. Looking at this curve it seems to me this could cause a mock reactive hypoglycemia (I know that is not a type 1 thing). But what do I know, I’m just a retired electronic technician. Those with more expertise and experience please feel free to correct me.

I’m using a lyumjeev trial pen right now… it works quite well, I think a little better than fiasp. Neither one of them are total game changers imo, and most insurance plans probably cover one or the other and I wouldn’t get upset over which

I was able to get a pack of Lyumjev pens recently. I’m still experimenting with using them, but the insulin definitely kicks in much faster than Humalog and drops off faster.

Last night, I was going up slowly at 160, took 3 units, and started going down slowly 20 minutes later. Eventually the downward trend became steeper. I hit 91 and flattened about 2 hours after the shot. Humalog doesn’t work that fast for me and lasts longer.

I went to sleep right after the shot, very sedentary. I’m impressed with that action.

I haven’t gotten to try anything other than Humalog and Novolog. The others aren’t on the formulary unless the basics are killing you.

Fiasp— modified aspart (novolog) seems to have enhanced novolog less so, for me… but since novolog was already faster than humalog, for me at least—- I’d say they end up being about equals—- lyumjeev and fiasp are supposed to be comparable

I am only on injections and am interested in these faster acting insulins but have a concern that they also don’t act as long as Humalog and could results in high blood glucose levels after having a typical healthy meal with a mix of carbs, protein, and fats and may have to more often take another dose an hour or two later than with humalog? I can deal with the issue of taking my humalog 15 minutes before a meal to get it going or at a meal if my blood glucose is not already low. I could also see that these fast insulins would be useful for dropping a high blood glucose level sooner but is 15 minutes sooner a big deal?
Update: I tried out Lyumjev for about 1 week and works just as I figured. I like it for bringing down high blood glucose levels faster and for high carb meals but Humalog’s longer action seems to match typical mixed carb/protein/fat meals better. If I just use Lyumjev on mixed meals I typical have to take a second shot a few hours later. Maybe the solution is to mainly use Humalog and Lyumjev in certain cases or just use Lyumjev and deal with taking a couple more shots a day? Not sure yet, but I could see how people on pumps that have the ultimate in control would really like the faster action?

The insulin an average person makes is regular insulin with about a 2 hour peak although lasts for 4.

The problem with it, is knowing when it’s finished.
That’s why they came up with faster insulin’s, to help get the job done faster and be done faster.

So a meal requiring 5 units of insulin still requires 5 units.
But carbs hit your blood faster than regular insulin can manage. So you go high and slowly return to normal.
As with any insulin timing Is the key. You need to figure out how foods effect your sugar and how long the insulin will work on it.

For me some things are just more trouble than are worth it.
Pizza and Chinese food. Yes I know it’s possible, I can set up extended bolus on my pump and I can take several corrections.
However when I look at how much insulin I need for a leak like that makes me change my mind.
An average meal for me is 5 units, it’s about 12 units for a slice of pizza and will not go away easily.
For Chinese food it’s probably 20 units if I’m eating the heavy breaded stuff. And I’m correcting all through the night.
I have put myself on a moderate carb diet of about 100 g.
It’s not locked in. I can have more.
It’s really an indicator to me, if I’m thinking of 200, I know I’ll be out of control for a while, and paying for it.
100 g for me is my sweet spot.

I’m not an endo, but I think if you could inject your exogenous insulin directly into the portal vein that a non-D person’s pancreas uses to feed endogenous insulin to the body, through the liver, I think you’d see much faster effects regardless of what insulin you’re using. Absorption through interstitial cellular fluid will always take longer. This is why pre-bolusing is a reasonable compensation for the delayed effect of injected insulin, and why some D’s really like afrezza (faster path to bloodstream).

I find most Thai and Chinese foods to be very difficult to predict unless I make them myself - too many sugars and starches in sauces and such. But I love these foods, so my ideal is to have them for lunch and then spend the rest of my waking hours cgm-surfing the effects with lots of bolus adjustments.