Hi All! My A1c of 13% caused concern for my GP and I was asked to monitor myself for a month with 1000mg Metformin XR daily. Lowest readings (fasting) were 15mmol/L and highest was (bedtime) 28mmol/L - average was 17mmol/L…

I was placed onto Humalog Mix 25 Kwikpen and advised to start with 20 units breakfast and dinner time - I started yesterday evening and this is my findings thus far: 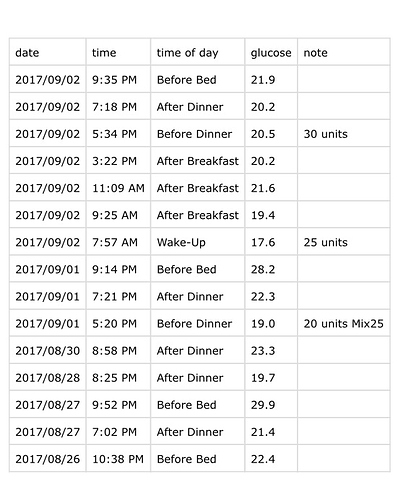 Something is wrong surely? I am getting the same readings as before I was on insulin AND there is no difference even though I’ve increased to 30 units…

Any advice is sincerely appreciated!

Are you on a separate Basal insulin? Because that’s what it looks like you need.

Take every one of those numbers you have listed and subtract 12.

The basal insulin takes care of your non-eating BG levels. The Humalog seems to be covering your meals fairly well, but a discrete basal would knock your overall levels down.

No basal insulin. Just Metformin 1000mg XR at night and the humalog mix 25 morning and evening with meals. Sadly, I don’t even know what basal insulin is???

Are you still taking metformin, was it making a difference. It is not unusual to take metformin and insulin together. Often a higher dose of insulin is required in T2, has your doctor told you to keep increasing till you hit your bg goal.

The basal insulin takes care of your non-eating BG levels.

Basal is for the background high BG levels I would (and you do) have EVEN without eating.

Is the “Mix 25” meaning (I just tried to google but sometimes SURPRISE it leads me astray) 75% fast acting insulin (bolus?) and 25% slow acting (ie - basal?)

Often a higher dose of insulin is required in T2, has your doctor told you to keep increasing till you hit your bg goal.

The problem with the mix is that the fast-acting is doing its job, but the basal…not so much. He doesn’t need more fast-acting. He needs more slow-acting. Which he can’t do with what he has.

Still on Metformin and Diabetes Educator told me to monitor what the 20 units would do and “increase accordingly”. I just assumed that meant it would work at 20 units… I don’t know how big an increase I should make or if there should even be a noticeable difference… feeing very lost

Ok, so would need to speak to my GP then. I wonder why he didn’t prescribe this to me? I mean, how do i even kow if I’m on the right insulin? Am I panicking too soon? Should I have seen a difference by now? Maybe I am expecting too much…

Until the numbers come down (not being a doc - obviously) it looks like he needs more insulin period. I think deciding whether more bolus or basal would be a decision when the numbers are a bit lower? Perhaps?

Although yeah - I would agree you are probably right about needing more slow-acting but right now it looks like not even enough fast-acting.

@Noobie - I would suggest a call to your Diabetes Educator or your GP and ask about increasing and how far they want you to increase it. Everybody is different but you should know what they are expecting so you know if you are getting the results they expect or if the approach needs to be revised with your Docs?

Don’t freak out. Increase your dose of insulin carefully to try to get your numbers down, but have some juice close. Leave a message NOW that your overall levels are too high and that you need something to deal with that.

I think deciding whether more bolus or basal would be a decision when the numbers are a bit lower?

I think it’s pretty obvious the numbers overall are too high. That’s basal. But the doctor should be able to figure that out. She doesn’t have the correct tool to deal with basal alone right now.

I think that Metformin does not work as a slow acting basal insulin and that is what it is expected it will do.
You need to talk about a different insulin therapy than you have been given, one with a basal and bolus insulin. Then your dr. or endo may decide to add Metformin to that to help with insulin resistance.

So tomorrow morning (considering I used 30 units for dinner) should I go to 35 or 40? I will have to email my GP on Monday for further recommendations. Thank you for your input. It’s appreciated as I feel rather dumbstruck.

Thank you for the feedback, Monday morning first thing I will chat with GP. I suppose (in my dream world) I thought I would magically get to a perfect level immediately…

Does that help at all?

That’s 75% fast-acting and 25% intermediate-acting. Did this doctor give you a glass syringe, too?!!

That’s 75% fast-acting and 25% intermediate-acting. Did this doctor give you a glass syringe, too?!!

Nothing else. Just the 5 pens for 1 month.

Joke. Glass syringes have gone the way of the Dodo since the mid-1970s. I HOPE.