My daughter is on basaglar and I’m considering changing to levemir. Is one better than the other

On the other thread you mentioned that she was on a very low dose of Lantus/Basaglar. I think you said 2.5 units, right?

The thing about Levemir is that its duration is dose-depend.

At such a low dose, the duration of Levemir could be very short.

The duration of Levemir depends on units/kilogram.

For example, if she weighs 25 kilograms, using 2.5 units would mean that Levemir would last less than 6 hours.

Can I ask what her weight is?

EDIT:
Of course, if that is too personal to share, I understand. This site has information on the duration based on dosage per body weight. But unfortunately the information is not explained in a very clear manner.

Yep, at a dose as low as 2.5 units, her duration on Levemir would be very short. 6 hours. Unfortunately, not ideal for a basal insulin.

But as she gets older, once her dosage is on the order of 0.2 units per kilogram (not pounds) it would get up to 12 hours. And I think 12 hours is a great duration for a basal insulin (doing it twice per day).

So I would suggest holding off until she was a little older and her insulin dose increases a bit.

No basal is really better than another, but they all have specific properties which may be better or worse for you depending on how you use them. There are people who say beef Ultralente was the best basal of all time, and that was created in the early 1950s!

Yes! Ultralente was the best and it was also cheap. Still mourning its demise.

It’s before my time, but I read Levemir has basically the same profile as human Ultralente, with the advantage of it being more consistent and easier to inject since it’s not a suspension. What disturbs me is that I suspect the drug companies got rid of Ultralente so that there would be no cheap alternative to the basal analogues. I had always thought that Lantus was the first real basal and was surprised to learn that people were using MDI with UL as a basal as early as the 1970s.

What disturbs me is that I suspect the drug companies got rid of Ultralente so that there would be no cheap alternative to the basal analogues.

I agree with you there also. It was possibly the first of the many machinations of the pharmaceuticals. I have always wondered what Ely Lilly got in exchange for dropping Ultralente?

Here’s a discussion on basaglar use. It was suggested to half the dose but inject twice. This will lengthen the duration of the basal insulin. The older generation Lantus, Levemir, has 20-24 hours duration. While the new generation basal insulin Toujeo, Tresiba has longer than 24 hours duration. I therefor suggest to switch to Toujeo or Tresiba.
.
Here is a graph comparing Lantus and Toujeo duration. 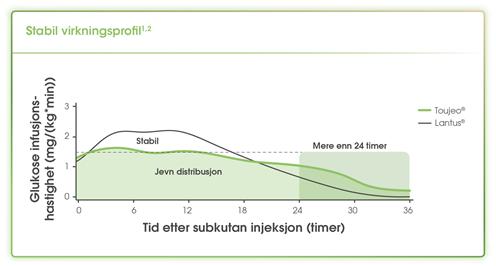 Toujeo green.
Lantus blue.
Keep in mind, the effect of insulin can be different for different individuals.
It is called Y D M V .