Well, I woke up very early feeling rough as a very rough thing covered in sandpaper with a very sign put around its neck. Why you ask? Why is it that difficult to get DIET COKE when you order it, and they even put it on the bill. I knew it tasted odd and that was dismissed as if not being proper Coke but some copy, but it was diet. Well yes, the fact I’ve spent last night over 25 (450) seems to say otherwise. A great start to the first day, a fight with getting my bloods back under control. 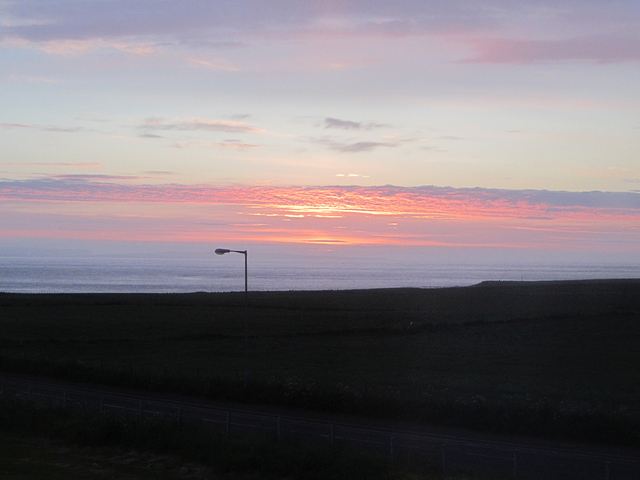 4767e42f59a8f322.JPG4000×3000 1.63 MB
Waking up early morning with the usual swings and roundabouts of a 3.3 (59), which a quick rummage through my food bag soon fixed. Outside dawn was just breaking and it was a beautiful sunrise coming up over the Orkneys. The red and orange’s looked fantastic. With breakfast still over three hours away I went back to bed. 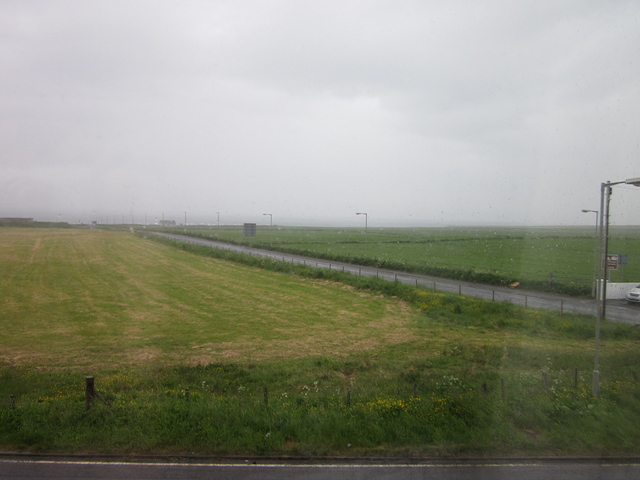 Properly waking up this time, and my blood back where it should be I packed up and made my way to breakfast. It was now pouring down and you could now only just see jut over the road. Nothing to fancy for breakfast, I did my usual of stacking up on milk for the protein and muscle repair though. Seems there was quite a few in about to set off. A large group of six guys from down south, and also a guy I bumped into at the train station in Thurso who was having problems finding his orientation on his map. Guess it’s typical for a large group of blokes but the southerners were annoyingly loud. 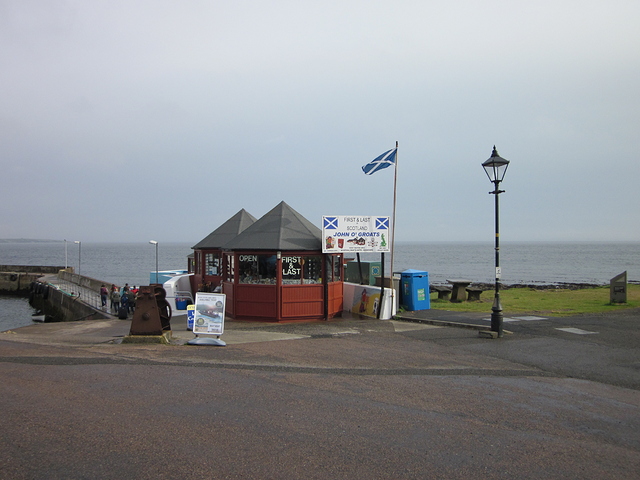 Loading up LM as the group in all their team kits, half Sky and the rest random teams loaded all their kit into a van, with two guys in support crew shirts. Turns out they are taking turns in the van when one starts flagging. I got chatting to one and we chuckled a bit about the sheer amount of kit I was packing but guess we’ll see on that in the long run. There they were, all dressed in team stuff, no bags and race bikes. And me loaded to the hilt, buried under waterproofs carrying everything including the kitchen sink. But I was off down to the harbour. 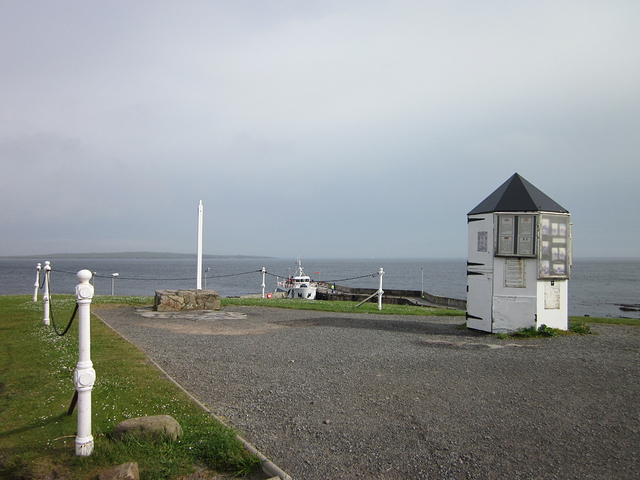 I trundled around a bit looking for the sign to but no avail before asking this lass at the fish stall. The sign was actually right behind me it turned out but there is a bit of local trouble going on about it. Seems that the old guy who owns it has taken to taking off the name arrows as he was annoyed at people turning up at all hours. The locals got fed up with this so built a new sign, not an arrow pointy one but a big sign anyhow saying the Last Sign in Scotland. We laughed about it, and how it all sounds all too familiar before I made my way off into the murk waving goodbye to the group and the guy from the station who were just arriving. 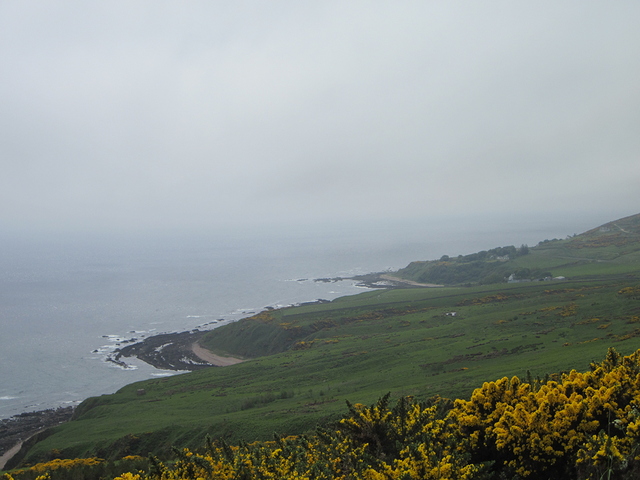 It was pretty slow going at first, until my legs warmed up. But it was nice to be under way. I pulled off the road to have one of my routine stops for drinks and blood checking on this drive by some farm buildings overlooking the North Sea. This guy comes out, broad Scottish as you would expect and introduced himself. It all turned out he’s a stone cutter, and was in the process of making an archway. It was great seeing the work going into carving up these stone blocks to make these arches which seemed very church window size and shape. Before I set off he gave me his own weather prediction which actually differed from the weather radar… His turned out to be correct!

On I went and as I climbed this lovely big hill, came across a group of Royal Marines going the other direction. We cheered each other on, and they shook their heads at my packs with them carrying nothing.

Then came the first big climb, a long 13% grind after a high bridge which my vertigo wasn’t too happy about, even more so with the cross wind. On the way up I passed two students pushing their bikes up, both also fairly loaded. I made my way to the top and got changed from my waterproofs as I was cooking after the climb and chatted with the two of them as we continued on. It all turns out Tommy and his friend who I’ve sadly forgotten her name, had just finished Uni. in Preston and had decided to do something different. They had already decided against the full route and instead heading back to Preston, but 30 or 40 miles in on the first day and they were already looking for the nearest train station. Hope they kept going and stuck at it though. 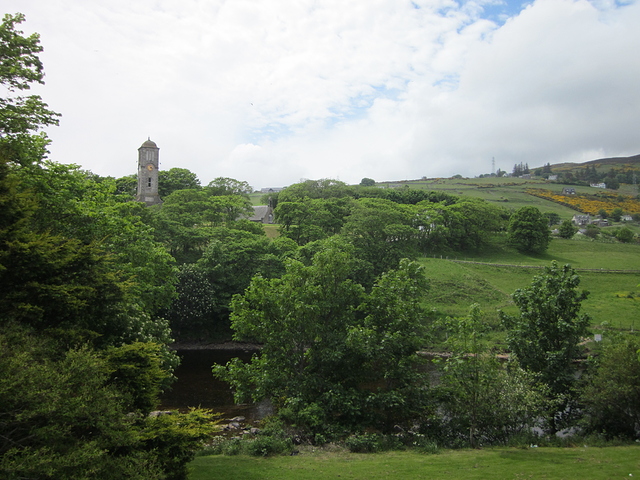 Then in lay-by who do I find, the group with a van. No idea where they passed me though, think they have been on a different route. I keep on going, wave to them and head on to Helmsdeep, as I renamed Helmsdale anyhow in the way that I do. Had lunch, and looked at the very impressive war memorial on the hillside. The number of memorials around here is amazing. Right along the coast, large graveyards, and some very intricate detail on them all. Most from the 1st World War, which seems to of hit the area incredibly badly. 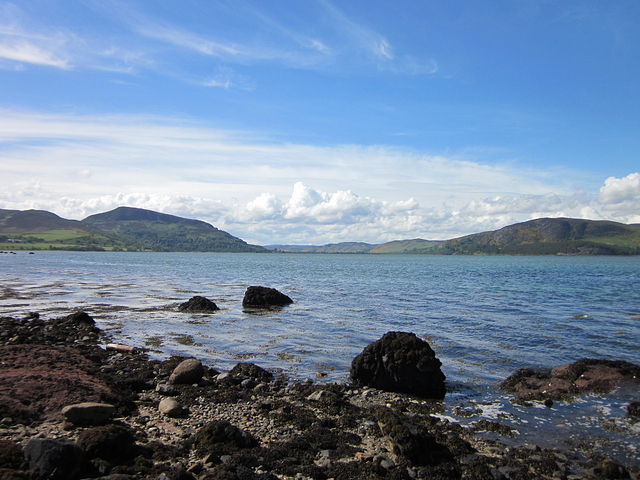 Stopping again for bloods and a drink the group of southerners overtake. And so it kicked off. They were nailing it, but I kept catching them between blood stops. In the end my brain decided it was best to leave them for now and head to one of the towns I looked at staying at and turned off to follow a close road against the sea to Dornoch. Pausing again for bloods, they had now dropped to the low 2’s (40’s) once more so I looked around for some more supplies and felt a bar of something in my jacket pocket. Handy! a Snickers bar, it looked a bit battered but it would do. A quick bite into it and crunch…rather solid. Not like that’ll stop me, so it soon disappeared before bothering to read the best before date of 05/12. Oopsy, a bit late now.

It was turning 4pm and my legs felt great, so I decided to plough on. And who do I find unloading their van in the village? Yep the group of southerners making camp at one of the bed and breakfasts in town. I waved and was definitely going further tonight now!

I crossed the Dornoch Firth bridge, cross wind battering me, focused on the white line to keep my vertigo at bay. And I go on to Alness where I find a nice place for the night. A pretty good first day really. Bloods weren’t too bad thanks to my constant drinking of carbs throughout the ride. Mileage for the day wasn’t to bad at just over 100 miles, and carb intake at 640g for 9.2u TDD. But it would be the recharge which could be interesting for the night and the following day.