How do you dispose of your used pump tubing? With your sharps? In the trash?

I put it with my sharps because I use the sure-t set which is a needle.

I toss the tubing and old set in the trash, there is no sharp on it. The introducer needled when the set is inserted goes in the sharps container. Sometimes I blow air through the used infusion line and re-use it for garden ties. They are great.

I use the Contact-Detach sets which have a needle on them, so I cut the end with the needle off, put that in my sharps container, and put the rest of the tubing in the garbage.

I on the other hand put everything in the garbage. Before it goes in, the needle from my Medtronic sets gets securely capped by design.

The biohazards related to possibly contaminated needles, razors and other sharps are really mostly relevant for healthcare professionals, due to the large numbers of those they need to deal with daily. (Additionally, they are trained NOT to recap sharps normally, again in order to reduce the chance of getting in contact with the sharp end.) Other regulations on waste disposal are aimed at large institutions where similarly it is the possible exposure of lots of people (employees, customers, etc.), even to minuscule risk (think law suits protection) that is considered to be a problem. In general, state regulations that I have found on the topic seem to either explicitly exclude “single or multi-unit family dwellings,” or only spell out their own relevance for healthcare facilities. You in your house have very little to worry about on this front.

All that said, if you are a better citizen than I am, here is a site that gives ideas for “safer household disposal of sharps” and lists local places where you can dispose of your diligently filled sharps containers: http://www.safeneedledisposal.org/.

Leaving sharps in the trash is a major hazard for people who handle the trash down the line. While this quesitonis is about tubing ( I put mine in the trash ), I hope we remember that trash can and often does get handled down stream in sorting, recycling and composting facilities. I cannot tell you the number of sticks personnel in these occupations expirenced in my former life s a city comptroller. Each stick is troubling for these men and women. Anything that goes in the trash ( used syringes, lancets, or sets ) needs to be properaly secured to not create a stick.

In Indiana there is no requirement that these items be separated or put in a sharps container. I realize different states have different rules, but sharps of any kind need to be dealt with correctly and if not separated at least blunted in some fashion.

Old tubing is great in the garden to tie up the plants.

I take the end off that has the needle in it to connect to the reservoir as that needle at some point in the down-stream refuse handling process could create a problem for someone. By then they will never know whether it was used in a bio-hazard service or not so better to remove the thing to a sharps container and dispose of it that way.

I’ve been disposing of my insulin syringes in the trash for many years and don’t see it as a problem. But before I dispose of a syringe, I snap off the business end so the needle is flush inside the cap. Usually I do this with a small pair of pliers, but in a pinch, I’ve just used my fingers. I think you would find it extremely difficult to extract the needle in this situation and would probably need to use something like an ice pick to do it. If you wanted to be overly-cautious, you could drop these snapped off bits in an old milk jug. You could put hundreds of these in one container.

Before we were on the pump. Syringe needle clipper. Super convenient.

Everything else goes in the trash. Our recycling is entirely distinct (ie - different trucks) from our trash so I do not expect there to be a legitimate reason for anybody to be poking through our trash with their hands. 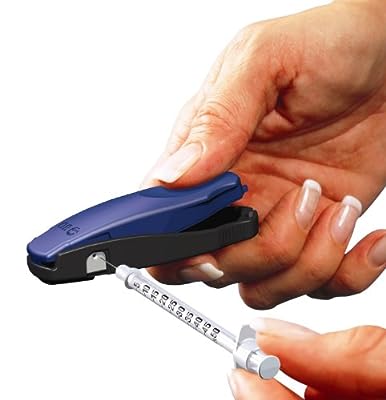 For needle disposal. Safely clips and stores up to a two-year supply of insulin syringe needles. Simple clipping action snips off and retains needles within clipper. Meets government regulations on pr ...

This is really based on where you live. Many states and cities have different regulations for sharp disposal. I do have to dispose of all sharps into a container and I take it to the recycle center where they have containers I just drop my containers into. I put everything in my sharp container except for the tubing and cartridge. Even my blood testing strips go in it, I guess I do that due to blood issues. I figure better safe than sorry.
I do so love the idea of using tubing in the garden. Never thought of that. Such a great idea.
And everyone should check out their local sharp regulations. Be safe not only for yourself but for others.