@PamS - here’s a recent code for you 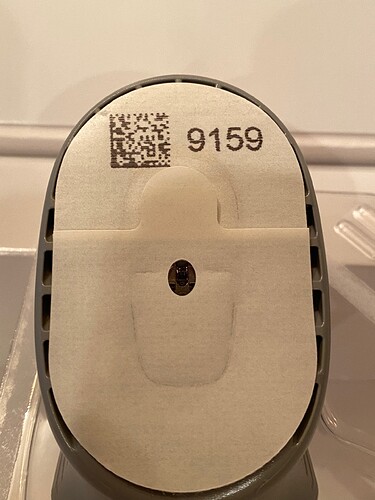 Hope your restart goes without any issues

here’s a recent code for you

Pam is looking for alternate transmitter ID, not sensor code.

By putting in a different transmitter ID, Dexcom clears internal memory. So after the new trans ID, you set it back to real transmitter ID, already active. The existing sensor can be restarted using original sensor code or no code, due to memory being cleared.

Hi again Timothy,
I was going to try and restart my G6 sensor today but the Dexcom flashed the obvious No Restarts message pretty fast. Tried prying a small test strip into the narrow end but that didn’t get in far enough. So I used a new sensor. Darn. Does your system described here on August 2021 still work for you? I’m going to have to try and do this the right way very soon. Thanks for letting me know if you do respond.

Wet the strip.
File the edge with fingernail emery thing
Should work then

Yea what tony said. I use a nail file on the that transmitter narrow part to allow the strip easier insertion. It doesn’t take much.

Wow - I tried yesterday but gave up when I could not make any progress. Will try that in 10 days! Thank you!

I meant file the strip to sharpen the edge. Keep in mind the original code may not work well and well need calibration

I know you meant that but if u file the bottom of the transmitter it will be easier every time. So you don’t have to struggle with it every 10 days

The last time I did it for my wife it blew up 3 days in (3am of course) so I stopped doing it as long as I have extra sensors. If I need to in the future I will try filing the transmitter.

I think sliding a strip under is less traumatic to the site than removing the transmitter. I’ve done it both ways. But I only do it when I can’t get home to put on another one. I really prefer to just use a new one every 10 days.

I couldn’t get the transmitter removed with a metal object either on me or off.

I have some firmer test strips that work for disrupting the transmitter instead. Much easier for me. Try a few different types if you know other diabetics.

Stupid me tried a new sensor on day 100 when of course the trans did not work. From now on I will plan and stop a sensor a day or two early to insure getting the most out the transmitter.

It would be helpful if someone could post a video of how to do this. I have tried it twice and it was not possible, the test strip is too weak and will also not fit under the transmitter.

Here is video on G6 restart.
Note there are different variations in other videos, but this is similar to what works for me.

I use test strips that are stiff, or a id/library card that is stiff enough.

Then slide that on each side of the transmitter, to release the clips that hold it in.

Skip to 2 minute mark for start of removal.

If you put sensor on stomach or leg, it will be easier to reach.

Ty, but I was asking for a video that shows how to put the test strip or something under the transmitter So it doesn’t have to be removed to restart it – Tim said that he does this there are no videos on anybody doing this that I can find on YouTube so it would be helpful if Tim or someone else would make one since he says he does this and it works.

I have a tried twice now to put one of my test strips under the transmitter and it was not possible so I would like to see someone else actually doing it.

I know how to remove the transmitter completely to restart it I’ve done that three or four times now although it is exceedingly difficult and I was not able to do it on my arm at all but the one of my arm was painful so I was going to remove that anyway.

Ty, but I was asking for a video that shows how to put the test strip or something under the transmitter

@meee Here you go. Note: You don’t need to wait 20-25 minutes. 15 minutes is all it takes NOTE: Stop the sensor from the software prior to inserting strip

Thanks! Somehow I didn’t even realize there was a little hole in the bottom there, lol and I was trying to stick it in through the side like I did to remove it. I will definitely try this next time to restart. I have freestyle light test strips I just hope they’re not too flimsy to do this because they are much thinner and more delicate than some of the other strips I have used in the past.

The first directions I read said to take it out for 15 minutes so I have only been waiting 15 minutes and it seems to work fine.

Well, me for one. I have used G5 and G6 only in upper front arm from day one of my use and my BGs are within a few points of the meter 90 to 99% of the time. Often less than 5 points. I think maybe my skin and tissue are good matches for the dex. Don’t know what else it could be since many others have problems.