@Stoner sent me this article in the Atlanta Journal Constitution newspaper this morning:

GRANTVILLE, Ga. — When Debby Tourville saw the uncompleted quilt top at Goodwill a year ago, she was immediately struck by it.Each square of the quilt contained a white hand, or two. One square had three. The hands were different sizes and shapes, and definitely looked like they were drawn from actual hands.When she saw it, Tourville, who was diagnosed with Type 1 diabetes six years ago, thought of the Diabetes Hands Foundation, which has a hand — with a pinprick of blood — as its symbol.The workmanship on the quilt, though incomplete, was impeccable. “I stood there and looked at it because I couldn’t believe that somebody would donate that handiwork,” she said. "My first instinct was to finish it into diabetic hands."Tourville and her sister Renee, who lives in New England, have been working on finishing the quilt. Tourville is sewing on tiny red buttons to make theblood drops, and hopes to have each hand on the quit represent someone with Type 1 diabetes.

She hopes to use the quilt as a fundraiser to help cover her expenses for a clinical trial to cure Type 1 by using the tuberculosis vaccine. Each hand will be embroidered with the name of someone with Type 1. Then the quilt will be raffled or auctioned off.The vaccine is no longer used in the U.S. for tuberculosis, but is used in other countries. The first phase of the clinical trial was quite successful, Tourville said.She travels to Boston to receive shots and tests. Her travel and hotel is covered by the trial, but she still has expenses, and is on disability.Tourville also wants to find out who those hands on the quilt belong to.“I know these hands belong to somebody. I’d love to find the story,” she said. “Somebody was making a family quilt, a generational quilt.”"I hope somebody is going to come out of the woodwork and say ‘I recognizethat quilt.’ I want to know whose hands are there, and I want to give credit to the original designer of that quilt top."The tuberculosis vaccine trial is being done by Dr. Denise Faustman, director of the immunobiology laboratory at Massachusetts General Hospital and an associate professor of medicine at Harvard Medical School.

Anyway, I reached out to her by email & encouraged her to join our community. She also sent me a couple of photos of the quilt, which looks terrific. We very much support the work of Dr Faustman. Hopefully, someone will know something about the top and how it wound up at Goodwill. And kudos to you Debby, for completing the quilt! 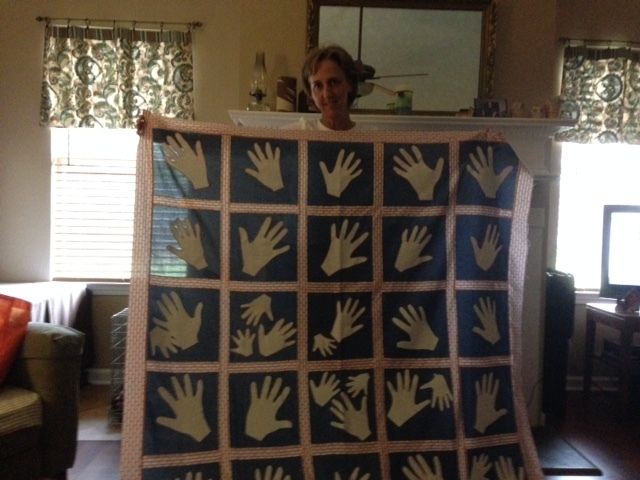