When I was on a pump I had so much trouble getting my infusion set to work properly. I´m considering going back to pumping and have heard stories about people gettig much more stable BGs with steel cannulas and thinking this might be the case for me too. I´d love to hear from anyone either using steel cannulas or having tried them out.

I know there are different types, do anyone know which ones have the highest gauge (i.e. thinnest needle)?

I use the T Sure from Medtronic because I was having allergy problems with the teflon, but I do think the steel is better for BGs as well. They don't bother me when doing physical activities either. There is also a steel site called the orbitmicro and the orbit90 that you could look into.

Thanks, Countrygirl. I saw the Orbit Micro mentioned on a blog. They are 31 gauge and only 5,5 mm. Looks interesting, hope I can get them here in Norway.

If I´m going back to pumping again, I´m going to get an Animas Vibe with the built in Dexcom G4. The Animas rep. recommended Contact-D, they are 6mm not sure about gauge.

Most definitely! The Sure-T "cannula" is like a pen-needle; it's very tiny. Compared to the teflon-covered-insertion-needle of other sets, it's painless to insert and doesn't leave those red welt-marks after a few days.

Also, since it has a separate sticky-patch for the connector (there are two things stuck to the skin, but only one goes beneath), tugging on the tubing is no longer an issue. I've actually found it to be more irritating on the connection-patch than the actual infusion site because of the stress on the tubing.

Since the cannula is really a needle, it's easy to "move" the site if necessary; just pull it out from one spot and pop it in another. So easy to do, that it saves the deliberation of "is my infusion site bad" when blood sugars go high. I cover the infusion site with a half-sheet of IV3000 (I use the full-sheets to cover my CGM) just to make sure it doesn't get pulled out. Since it is a needle, it can be painful to remove if you don't pull it straight out, unlike the rip-it-out technique of other sets. Even though the adhesive seems stronger on the Sure-T, someone suggested I cover it with IV3000 just to be sure.

Finally, the Sure-T opened up more site possibilities than my old Silhouette did. The infusion site is very low-profile; almost like a Band-Aid. I usually put it in my back. The other part is a little bit raised to accomodate the connector, but that can be located in a more convenient spot; a little "pigtail" section of tubing that connects the two is about 5 inches long.

Here's an image of the Silhouette versus the Sure-T which I shared on my blog when I made the switch, almost a year ago: (the whole blog post is here) 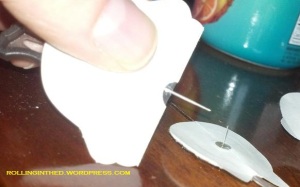 And finally, this is the blog post that I discovered that convinced me to give it a try, and I'm so glad I did.

Wow! Thank you so much for a helpful and insightful reply. I´m going to read the blog posts ASAP.

Just one Q before I start reading:
Do you think there´s any differnece in real life between 6mm/29gauge and 5,5mm/31gauge?

The Orbit Micro seems to be the thinnest and shortest while the rest ends up a bit thicker (29 gauge) and sligtly (0.5mm) longer. Maybe just kids will notice the difference or am I worng in assuming this?

And one more thing:
Is Contact D (for Animas pumps) same as Sure-T only Sure-T is made ny Medtronic for their pumps?

Hard to say -- I'm honestly not sure what gauge my Sure-T is (the website suggests it's 29). Naturally, the higher number would be thinner, but I find mine to work just fine. I don't know if there's any danger of the needle snapping off if it's too small, but I would ask those questions if I were considering a 31 gauge. My one gripe with the Medtronic Sure-T is that it's not sold with 42-inch tubing like the Silhouette is; the longest is 32 inches. It makes things like getting dressed or using the bathroom a little more challenging.

With regards to sites, I think the abdomen is not a great choice because it gets stretched and compressed a lot as you move around. The back is a bit more "stable", which is why I use it.

Feel free to ask if you have any other questions...

I never heard of it until now (just looked it up), and it looks like the Contact D is distributed by Accu-Chek (not Animas). If I recall correctly, the Accu-Chek pump isn't available in the United States, so I don't know much about it.

Most infusion sets are made by a company called Unomedical and sold under different names by the various pump manufacturers, so it's probably the same thing. Take a look at the Unomedical site (http://www.infusion-set.com/) to find out...

Yes! I had trouble when I was using the plastic cannulas. My site would get irritated and kinked more easily and it would leave marks that lasted for days! The stainless steel cannulas were my answer! I have definitely noticed an improvement with my bgs.

I´m going to se a nurse tomorrow, hope she can show me the alternatives I have here in Norway. Good to prepared though.

Thanks for your reply, Natalia S. Which infusion set do you use? And where do you wear them?

I got a few samples of the steel cannulas and really liked them. I have just ordered my first order of them as a matter of fact. I am having a lot of scar tissue problems so the diabetic care coordinator I met with last said sometimes it helps when you have a different length cannula with this issue. I have a limited area where cannulas seem to work. Mostly my lower abdominal region. I was worried they would be painful but they are not. Also I like that there is a place to stick the tubing to your body so when you drop your pump the tubing does not pull directly on the site. Hope this helps.

I have been using Medtronic Sure-T infusion sets for about 3 years ...thanks to aa ex Tu member ..and have been pumping since 2001...a bit of info about the gauge of needle http://www.diabetesexpress.ca/insulin-pump-supplies-medtronic-minim...

Great, thanks. I am meeting with a nurse this morning.

Thanks, nel. I do not fit any of the categories either; I´m kind of old but young at heart. Hope that helps :)