I’ve been recently pre-bolusing for meals with Humalog 10-15 mins ahead of eating to get tighter control. I’ve been noticing though that if an hour after a meal I’m in the good range, I’m destined to get a low soon after. I’m wondering if others have found the “fast-acting” insulin of today (and the last 10+yrs) isn’t that unsimilar to the R insulin of my youth and really isn’t as fast as proclaimed. I’ve also been wondering if the Humalog sticks around for a lot longer than it says it should.

Do I need to revert back to the dark ages of shots and giving my insulin 30 minutes ahead of time?

How much time before eating do others pre-bolus to make sure they aren’t getting meal spikes?

I eat very healthy, whole grains/ bean etc, low fat, emphasis on whole foods vs processed. My insulin intake is pretty low, ~12 basal rate/ day; ~12.5 bolus/ day. I’m not sure if this would effect any of this though…

Well I have not found that to be true. Insulin is fast for me, so I bolus right before and make sure a meal is ready before I do.

BUT, if you think 30 minutes ahead is necessary then go for it. The only way to know how much time we all need is to test each scenario (more than once), determine how your body works with Humalog and then apply that discovery. Also, remember it could change any time. There are no true rules. I have days where it seems like my insulin sticks around all the way into the next day.

These are likely to be low GI. If you are going hypo in the period 1-2 hours after your bolus, it would suggest that the problem is that the insulin is acting too quickly (rather than too slowly) and insulin action is running ahead of carbohydrate digestion. If you are using a pump, the best solution is to use a Combo/Dual Wave bolus (different pump manufacturers use different names) and spread out part of you bolus so you delay its action to coincide with the BG rise. The exact details of how much upfront and how long to spread the remainder of the bolus is really a matter of trial and error. Try 70% upfront and the rest spread over 2 hours and see how it pans out.

For me a modern fast analog and R have distinctly different behaviors. That’s why I use fast acting for meals that are carb-heavy and R for meals dominated by protein, they fit the respective curves best. But if it doesn’t work that way for you, then you need to design your regime accordingly. We each react individually to things. It is what it is, for each of us.

The following image is borrowed from a John Walsh presentation (Page 82) - http://www.diabetesnet.com/pdfs/InsulinTherapyNextLevel-Walsh-Montreal-040413.pdf)

It a Humalog curve for an “average” person. I use a CGM, so I have figured out to eat when I start to see a drop in BG on the CGM - it is what Stephen Ponder calls “Waiting for the Bend”. If it is a very low GI meal I inject just before the meal and don’t wait for the bend.

For me Humalog is a lot “quicker” and does not stick around for as long a R used to. I think to get R right, I would have to prebolus about 1/2 hour before a typical Humalog pre-bolus. 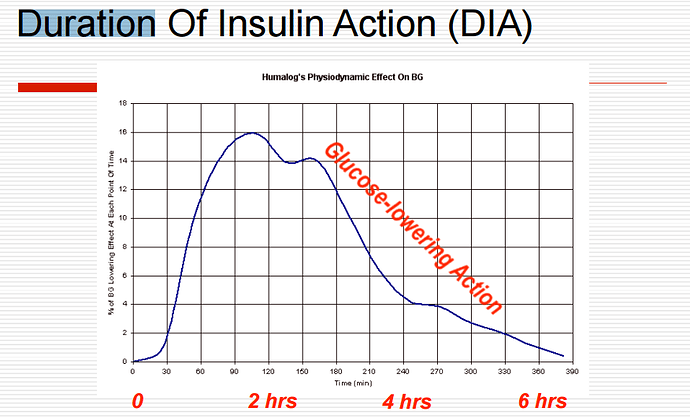 “Waiting for the Bend” is a very effective strategy when I can convince my daughter to use it.

I have to convince myself to use it too quite regularly. Sometimes I ignore myself and start eating too soon because I am hungry and then I get a nice spike