Look what showed up in my easter basket ;) 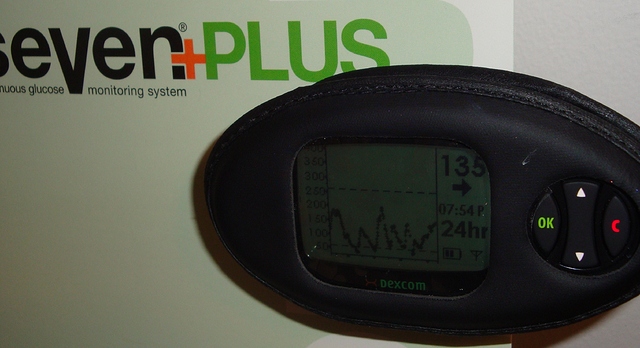 Though truthfully, it arrived on Friday (ahead of schedule!) which was perfect for testing it out before using it at work. It was very exciting opening the package late on Friday…only discover that I’d need to charge the batter for 3 hours and then also give the sensor another 2 hours before actually calibrating and truly using it. Given the advice I had read about doing calibration when numbers were relatively steady, I decided to wait until Saturday in between boluses.

It all went smoothly…though it was strange pushing the plunger in without really knowing how long it was/would take it, so if felt like longer. The most difficult part was removing the applicator and then the safety lock…I might need to brush up on my twist and pull skills :0

So far the meter and CGM have not been horribly off (ranging within 1 point to 30 points, but usually about 10 points).

Interestingly the CGM tends to read lower or higher than the meter more often than the other way around, particularly when it’s rising or falling…and already it had reported false positive twice for hypoglycemia (and I have my alarm set at 60). However, last night at 130am it went off and was only reading low, but given the recent events I had thought I would only be 60 but it tested at 29…which if it hadn’t gone off I would never have woken up (and I suspect this has happened before…especially mornings where I felt drained/hung over w/o even drinking)…treated it retested 17 minutes at 62 with it still rising so felt safe enough to go back to bed

Unfortunately at 530 the alarm went off again, but it was only 53…and seemed to hover around 60 for half an hour when I gave up an overcorrected because I just wanted to get some sleep ;p Meh Woke up high (201) but at least the rest of the day has been fairly smooth (coasting between ~65-135)

I have found that my CGM is most accurate from Day 2 through Week 2 or 3 :-). Even though the Dexcom starts giving you readings 2 hours after insertion, it is really still equilibrating with your body for the first day.

Excuse me for not directly relating to the CGMS. But the words “only 53” are sounding strange to me. Why the word “only”? It is a hypo and it must be treated. How many carbs have you eaten then and what type (glucose tabs, juice etc)?

Thanks for the comment John and glad to know that its accuracy is supposed to improve!

Holger-the only was used to signal relief like ah it’s only 53 not that big a deal in comparison to 29. With the 29 I had take about 20-24 carbs (not sure since it was mid sleep and was a bit out of it) and it was all glucose tabs. With the 53, I took initially 2 tabs (8g) then 3(12g) when 20 minutes it hadn’t risen at all (both Dex and meter reflected that) but still another 40 minutes later it had dropped again and ate some pb and more tabs (4g) because I just wanted to sleep and only had about an hour left.

Wow, it seems the Lantus drags you down pretty badly at night. Have you ever thought about switching to a two shot regime with Levemir? It is much more stable and reliable than Lantus in my opinion.