Type 1 and LADA
HFXNS July 20, 2010, 1:13pm #1
This was published in today's New York Times. When my type 1 diabetes was diagnosed 13 years ago, inhalable insulin was supposed to be the next big thing---and we all know how that worked out.
As the article says, "The more things change. . . ." 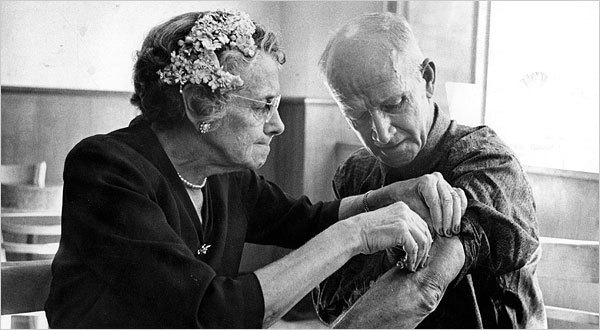 Catch the headline in The Times? “Warning Urged on Diabetes Pill,” it stated. “F.D.A. Proposes a Strongly Worded Label on Hazards of Heart Disease to User.”

But it didn’t run this week, regarding the drug Avandia. The headline appeared almost exactly 35 years ago, on July 4, 1975, about a different drug for Type 2 diabetes that went through a strikingly similar controversy: tolbutamide. To this day, it and similar drugs for diabetes, the sulfonylureas, are still sold with a warning on “increased risk of cardiovascular mortality.”

The more things change in diabetes treatments, it seems, the more they stay the same. About four months after that old headline ran, during my freshman semester at college, I went to the hospital one afternoon for nausea, figuring I had a bad case of flu, and learned I had Type 1 (juvenile) diabetes.

Not to worry, the doctor told me. In fact, he said, I was lucky. The old glass syringes that diabetics used to need were a thing of the past. “Now we have disposable plastic syringes,” he said. (Oh, joy.) Better yet, he said, a cure was coming any day. Pancreas transplants had been done in mice!

I was still waiting for that cure in 1983, when another Times article began by quoting a physician speaking to a group of Type 1 diabetics: “In your lifetime, you’re going to be cured.”

These promised cures and assorted breakthroughs turn out to have a long history. On May 6, 1923, The Times published an article by Dr. Joseph Collins under the headline: “Diabetes, Dreaded Disease, Yields to New Gland Cure; Previous Claims for Insulin Confirmed at Meeting of American Physicians.”

That was actually the third time the newspaper used the word “cure” in the headline of an article about insulin’s discovery. And it was easy to understand the excitement. Until the 20th century, diabetes was considered a rare disease: in 1866, for example, the reported death rate in New York City was 1.4 per 100,000 residents. By 1923, the rate had jumped to 22.9 per 100,000, and the idea of a cure was welcome indeed.

But as many knew even then, insulin wasn’t a cure. Sure, it instantly saved the lives of people like me, with Type 1 diabetes; but it was a lifelong treatment, carrying the ever-present risk of causing blood-sugar levels to fall dangerously low.

Moreover, it soon became apparent that insulin didn’t prevent long-term complications, and it didn’t work nearly so well in older, heavier people — those with the far more common version of the disease, Type 2.

By the 21st century, the promise of a cure for Type 1 seemed to have finally been fulfilled with the development of the Edmonton protocol, a method for transplanting insulin-producing beta cells into the pancreas. It looked for a few years like the real deal — until most of the transplanted cells stopped producing insulin in most recipients, and the patients had to resume taking injections.

For Type 2 diabetes, the drug industry has now produced some two dozen types of medications, even as the disease has become about 50 percent more widespread in the United States than it was in 2001, with some 23.6 million diabetics, or nearly 8 percent of the population, according to the Centers for Disease Control and Prevention.

Type 1 diabetes is rising sharply, too. A large and growing body of scientific literature suggests that it is now being diagnosed at about double the rate as in the 1980s, about five times the rate of the 1950s, and perhaps 10 times the rate of a century ago. Researchers at the C.D.C. tell me that it continues increasing by about 3 percent a year.

It hasn’t all been bad news for diabetes treatments, of course. With so many more people affected by the disease, the decline in death rates since the 1940s is reassuring.

Home blood-sugar tests weren’t even available when I learned I was diabetic, and they’ve since helped millions manage their disease better. Insulin pumps and continuous glucose monitors for Type 1 have also greatly improved control of blood-sugar levels. And an old standby for Type 2, metformin, appears to be one of the few drugs for the disease that actually prevents the loss of insulin-producing beta cells in the pancreas.

But given the disappointing history of many other treatments, some researchers have set out to find ways to prevent both forms of diabetes in the first place.

“Whatever the trigger is, we want to find it,” Dr. Judith Fradkin, director of the diabetes division at the National Institute of Diabetes and Digestive and Kidney Diseases, told me. Regarding Type 1, she said: “The rates are rising. Something has to be behind it. We need to find it. If we find it, that has tremendous implications for prevention.”

Studies are now under way to test promising strategies, whether by removing cow’s-milk formula from infants’ diet or by giving a vaccine that calms the immune system’s attack on the pancreas.

For Type 2, ambitious public-health campaigns are likewise seeking to prevent the disease’s spread, by lifting techniques from the anti-cigarette playbook: taxing unhealthy foods and drinks, limiting their availability and alerting consumers to their risks with calorie counts on chain restaurants’ menus (a strategy pioneered in New York City and recently passed as part of the national health-care legislation).

Nearly 35 years after my diagnosis, I’m doing fine, without any complications — and still without any cure. But these days, my hopes have shifted from cure to prevention, so that my 14-year-old daughter and the millions of others at risk never get diabetes in the first place.

Wow!! Now I feel Really Bad for everyone(except for me, my Diabetic Family Members and Friends and the Diabetics who didn’t have to continue dying shortly after that starvation diet back then), that Insulin was discovered.

Mr. Hurley must know that the Diabetics who are alive from the 30’s, 40’s, 50’s, 60’s and 70’s, etc. is mainly due to the discovery of Insulin. Ask them! The other reason is because they wanted to learn how to survive, so they looked for knowledge, Some from their Drs., some from reading books, some from transitioning to a pump and/or CGMS and definitely from talking to People easily way back to 1999 from the countless Terrific People on Diabetes Communities, such as this one.

The last Real time that I was excited about a cure for Diabetes was in the mid 1980’s when my BIL phoned me to tell me that he had heard on the news “that there was a cure for Diabetes”. Then the disappointment…AGAIN. My Son was 4 then, now he is almost 29.

I’ve never been a Pumper but I am still doing Good Diabetes-wise, thank you Very much. I have no Special genes. When I stop following my Diabetes regimen, I get a complication. I agree that many People with pumps are doing Good also. But the pump is useless without the info, discipline and understanding that is needed to make things work properly. The same type of info(although a bit different) is necesary for the use of a syringe and pen. Different strokes for different Folks!

Hurley (the author of the NY Times article) is also the rabble-rouser author of the book “Diabetes rising”. He’s a T1 diabetic and his daughter is too.

While a lot of us are content to just treat our diabetes, I think the rabble-rousers who crusade around trying to point out “hey there’s still no cure” do have a place in the world… and when the rabble-rouser not only has T1, but they also have kids with T1, then I can see where they are coming from. I have three kids and while none of them are T1 I always have to add the qualifier in my head, “none of them are T1 YET”.

A lot of us were diagnosed in times (30 years ago for me, 50 years ago for others here) where neighbors quietly gossiped about the poor kid next door with diabetes. “Yeah, been taking shots for months now and still not cured! Isn’t it shameful?” and as a result we tend to be anti-rabble-rousers, we hate the pity party aspect. The rabble-rousers have certainly overcome that but some of us still feel a little ashamed and don’t really like the rabble-rousers drawing so much attention to how we still aren’t cured. Still, they got the guts to go do it when I really don’t have the guts or the energy.

Heck, Hurley even gets beyond the T1/T2 differentiation and talks and campaigns about them both. Many of the most “pure at heart” T1’s and T1 parents aren’t able to make that leap, and realize that while there is a differentiation, the commonalities are still huge.

Yes well, “rabble rousers” have been around long before Hurley and still no cure. Just like Banting, it’s the “dedicated” Researchers/Drs. who are sick of seeing Children particularly, dying of this disease, the Advocates and finally the Governments who either don’t want to look like total A–holes for not giving enough to research or are seriously afraid of this Epidemic. Unfortunately, as the Researchers have found, that Diabetes is a truly complicated and frustrating disease.

Way back then and even now, the Governments have always given the most money to all the war efforts. Thus “no cure yet”. Fascinating really. You are right, Hurley does have a place.

I’m not sure why you’re calling him a “rabble rouser.” The essay is simply discussing how we’ve been on the verge of a cure for so long, and that despite the advances in treatment (pumps and CGMS for type 1s; oral anti-diabetic agents for type 2s), diabetes has become more deadly (largely because of the vast number of type 2s), and rates of both types of diabetes are rising, which is particularly scary when it’s type 1 diabetes, because its cause is unknown and it is not preventable (unlike type 2 diabetes).

I applaud him on his moving his hopes from cure to prevention.
There is no prevention, any more than there is a cure in sight, however, when big business can load us up with toxins, when engines for space vehicles and airplanes spew out who-knows-what into the atmosphere, when we live near highways loaded with more unbreathable noxious fumes. And when we eat foods loaded with more unknowable chemical products than we can pronounce.
We live in a vastly different world than we did in the 1930s. Cities were polluted, but the USA countryside was pristine (with only fertilizers).
After all, the more people get diabetes, the more business gets its ROI.
And in two hundred more years it will be some miniscule % of the population that won’t have diabetes.
We need authors who can put diabetes before the population til the population rises up about what really awaits their next generations if we continue as we are today. Maybe future generations will look back at diabetes as only the forerunner of many such types of diseases.

Many of us have a very strong desire to avoid the “pity party” aspect and insist that we can do anything and go anywhere and we’re gonna prove it. That’s all true, but you’re right, it misses out on that insulin is not a cure, it misses out on the long-term complications, and it misses out on the short-term critical dangers of hypos and DKA and etc. which we can LARGELY avoid through frequent bg checks but even that doesn’t help everything.