Proper Pinch for Pen Injection - What is your Technique? 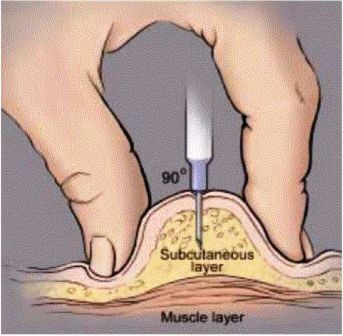 When I used syringes, I had pretty good luck doing a simple pinch of flesh at my abdomen and injecting at 45 degrees. After I moved to the pen I found that I could really only do perpendicular (90 degree) injections. And I also found that I had a lot more difficulty pinching properly. If I grabbed too much flesh and inject, I can actually feel the improper pressure as the need hits my stomach wall. If I pull out the pen (even waiting 15 seconds), I can see all the insulin spurt out indicating that I missed the subcutaneous layer and hit something hard.

I currently use 8mm pen needles. I had tried the 4 and 5mm needles, but noticed more “leakage” where insulin would come out a bit at the injection site. I’m considering trying those needles again, but I am wondering whether I can improve my pinch technique.

I have been injecting for over 2 years and yet I still will often mess up. And if the pen jams indicating that I hit the stomach wall, I am never sure how to count lost insulin. So it continues to plaque me. So what do you all do? How do you pinch? Do you use a pen injection at 45 degrees? Do you use a shorter needle and go perpendicular?

my cde taught me to just separate my thumb and forefinger about an inch and just put them down where im gonna inject, not to pinch, just to raise the skin by putting my fingers down on the skin.
ive since moved to 5mm needles and dont have to pinch. the nurse who gives out the needles at my health centre tried to tell me they were only for peds use but i had done my research beforehand. i dont know if it was bd, but a study was done comparing insulin absorption using the 8mm and the 5mm and there was no notable difference. here is the link: http://www.ncbi.nlm.nih.gov/pmc/articles/PMC3118929/.

i have noticed leakage with both lengths but dont count anything lost cuz i have no idea whats lost, like you said. i have always done them at 90degree angles, as thats what the cde taught me. ive never had the pen jam-gross!

i prefer the smaller needles just because im a big baby. after a couple of months using the 5mm i opened a 8mm and balked at the length-way too long for me now! ill probably never be able to go on the pump!

I generally use 5-6mm at about 90 degrees. A tip I read somewhere (can't remember anymore) that seems to help a bit with leakage from pen or site is the following: after waiting for the pen to finish injecting, twist it around (keeping the injected degree stable) for a few seconds. It usually gets those last few drops dispersing better for me.

I was diagnosed so long ago that I don't even remember how I was trained to inject. :)

I tried for 25 years to perfect my injection technique and never quite mastered it. I've seen bruises and leakage, switched to shorter needles and it still sometimes happened. I tried pinching and not pinching, 45 degree angles and 90 degree angles, fast and slow...never seemed to make a difference consistently. Never tried to account for lost insulin because I was too afraid to overshoot.

Do you pinch? Perhaps I should just give the 4-5 mm needles another try. I certainly wait 5-10 seconds, but I've never tried the "roodgirl twist." I'll have to give that a try.

Your pinch technique is certain different and more gentle than mine. It is worth a try.

A tip I read somewhere (can’t remember anymore) that seems to help a bit with leakage from pen or site is the following: after waiting for the pen to finish injecting, twist it around (keeping the injected degree stable) for a few seconds. It usually gets those last few drops dispersing better for me.

Has anyone tried this? “twist” that’s news to me.

I’ve often wondered about the extra drop. I just assumed that I can’t get it precisely 0.5 or 1 unit and simply accept the outcome.