Retinopathy gone in March 2022, light flashes and floaters in June

This is probably age related and not a diabetic complication, but hey, where els should I post?

I had a history of retinopathy in my right eye. It was minor and after going on MDI and pump that has cleared up completely.

Yesterday I did some yard work, clearing ditches of weeds with a Wheel line trimmer. I would see something on my left side, thinking it was a spider web caught on my cap bill. When I turned of the lights at bedtime I had a brilliant flash of light on the left edge of vision. It happened after I awoke. I also had a thready floater.

Called the retina doc, was told to fast water and food, not lift over 5 pounds, no bending over at the waist and come in at 12:30PM. That’s plenty scary. The worry is a tear in the retina, and they might have to do a procedure to repair.

Good news is no damage to the retina. The vitreous gel sometimes pulls away from the retina can cause this. Lucky me, I have a follow up in 7 weeks. No doubt the sun will be brilliant as is every time I’ve had my eyes dilated.

My step-mother was blinded by an abusive exhusband with detached retinas in both eyes. She adapted very well to her blindness, but I don’t think I would cope as well

So glad there is no retina damage.

I’ve had Type 1 for 46+ years and fortunately have never had damage to my eyes from diabetes. But it is always a fear since I consider sight to probably be my most important sense.

I have vitreous gel that has pulled away from the retina. I don’t get bright flashes, but I do have thready floaters. Getting old is so darn fun!

it is always a fear since I consider sight to probably be my most important sense.

I wonder how I would manage blood glucose levels and more if I were to lose my eyesight. Maybe give up the pump for pens, and use a talking glucometer like: 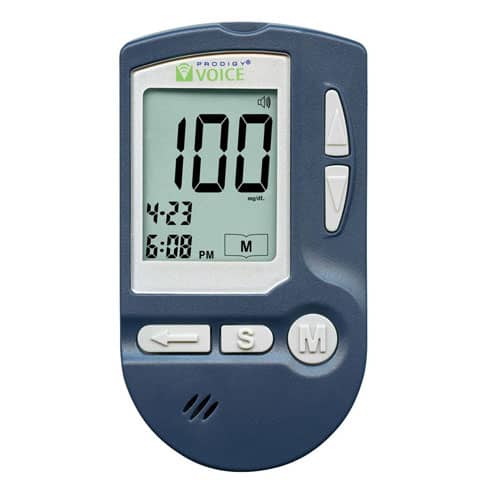 I suppose my wife and son would help me, but I have always taken control of dealing with diabetes, not wanting to add to their burdens.

I have a niece who is an occupational therapist. I think about how it would be to lose function of a hand. So many things are easier with two hands… Oh well, worry is paying interest on a note before it is due.

I have healthy retinas and I get photos every year.
I also have floaters that started when I was in my mid 30s.
Always told they were just normal aging.
I know other people who have them. Non diabetics too.
I guess it helps to have them checked out no matter what.

I don’t know how after 35 years of t1 that I don’t have retina or kidney issues. I also don’t have PAD. I went my first 20 years with moderately poor control.
Of course my blood pressure is low and always has been, along with a slow heart rate. I’m not sure how much of it is just that.

Every change in my vision worries me to no end.

The floater alone would have been troublesome, but the light flashes were scary.

Every change in my vision worries me to no end.

The vitreous gel sometimes pulls away from the retina can cause this.

FYI, this isn’t even related to diabetes. It’s a very normal thing that can happen to anyone, diabetic or not. It’s a natural part of aging. The problem happens when it separates quickly, rather than just slow and steady.

Of course, I’m repeating what I was told nearly 20 years ago when it happened to me, so I don’t know if opinions have shifted any since then. I was told that I had absolutely no retinopathy (yet, I do now) and it wasn’t related to my diabetes at all, and that it happens in this catastrophic fashion more often in nearsighted people (which I am).

My experience was different than yours, though. No flashes of light, and no mere floaters. I was in undergrad, standing in the cafeteria line, when my vision started slowly blacking out. It looked like someone was slowly drawing a blanket over my eyes, from the bottom up. Both of them, at the same time. I just stood there in the line freaking out, and watching my eyes fill with blood. Though I didn’t know at the time that was what was happening. My friends took me to the ER, which was absolutely no help. They sent me back to the dorm blind, and with an appointment the next day at an eye doctor. (First time EVER I was grateful my room was right next to the bathroom!). And after a whole night of anxiety where I imagined the worst, the doctor told me to chill out, and that my vision should return within the week as the blood dissipates all on it’s own.

And it did. The most frightening event of my life up to that point turned out to be absolutely nothing. They sent me home with some pretty cool eyeball pictures, though, to use a doctor’s note.

I had the same thing happen last summer in my right eye (was looking for a critter on the floor when it first happened it was so strange…and scary) I still see flashes of light off to the outer side sometimes at night when I’m driving. Still have a large floater that I am used to now. It started with small dots like floaters, which I now have in my left eye. Vitreous gel problem that can happen with aging.

I went to a new eye doctor that has a machine that gets very detailed images of the eye rather than dilation.

I found a link to machine she uses. Optomap vs. Dilation — Eyes on the City

I had retinopathy diagnosed in the 2000-2010 decade. I started using a pump in 2007, 62 years after my Type 1 diagnosis. Later that year my problem had disappeared, and has never returned. The improvement of control with a pump was the solution. I have so many floaters in my left eye, but I have adjusted to that and my vision is good.

my problem had disappeared, and has never returned. The improvement of control with a pump was the solution.

I am convinced that achieving really good time in range whether with MDI or pump is key to preventing many diabetic complications.

Well Luis I was convinced that a really good time in range would prevent complications for me too. My time in range 65 to 140 is excellent, but other causes of typical diabetic complications are happening to me. Heart stents after 51 yrs because of so many very low carb years. At 62 yrs of type 1 a sudden aneurism in my eye. I had no retinopathy for decades. I have read that that Cholestoff, a supplement I take to reduce my ldl, might have caused it, but I am still taking it,because I would rather lose my eyesight than my life.
After about 61 yrs of diabetes, I developed neuropathy as a side effect of trying a statin. Now my feet and calves burn when the neuropathy is active.

Now I have the new problem of the vitreous gel pulling away from my retina. I really dislike my nearly perfect eyesight being affected by this. It bothers me most when being a passenger in the car on a bright day or when reading.

Maybe I was more susceptible to these problems, because of 22 yrs of bad control when only urine testing was available. I don’t know.

I have had a non diabetic A1c for the past 17 yrs. My TIR is excellent. At 71 after 63 yrs of type 1, I could certainly be in worse shape, but at times I feel like I am fighting a losing battle. I had no complications during the first 50 yrs of having diabetes.

I don’t know if people who read a lot get more floaters, but I’ve had them since I was approx. 20 years old approx. 60 years ago. Thought it might be due to long hours reading and writing for courses I was taking. Eye doctor said it wasn’t significant, and so began many long years of ignoring them whenever a new one would appear, and usually replace an old one (or more). Didn’t really interfere with anything. Then when I was 55 and diagnosed with diabetes and got my BG down around 250 points into normal range pretty fast with diet and exercise and the infamous Rezulin (later disontinued due to dangerous side effects) for the first few weeks, I had a scary episode of “flashes” of light (even in the dark) around the corners of my eyes, and of course went immediately to opthalmologist. He, too, said that it wasn’t anything to be concerned about. I have a feeling it was due to getting my BG down a little too fast. No problems since then, although I’m still having plenty of experience ignoring all the floaters when looking at a bright background (like computer monitor). They’re only annoying when I concentrate on them.

I have the same thing and it is called posterior vitreous detachment. I had it first in right eye and it’s better. About a year and 1/2 later I developed it in my left eye. That eye is a terrible nuisance at this point. I have all the same symptoms you do. The first time I was aware of a problem, I thought I had a hair or cobweb and I kept swiping in my peripheral vision without success. I was in a meeting and I am sure people were wondering. What can I say-getting old stinks.

It ain’t for sissies, that’s for sure.