I have been working with my pump nurse on the leg cramps - my potassium is normal, I’m also taking a multivitamin with iron just in case anemia is complicating the problem but the best suggestion has been drinking a 3 - 4 ounce glass of sugar free electrolite liquid (I’m using Propel - ick) when I bolus. The theory is that insulin action at the cell level causes rapid movement of potassium - sometimes causing those horrible cramps. This has eliminated the severe cramps since I began taking the drink whenever I bolus. Hope this helps.

I’m not saying this to say “yay me” but I rarely get above 200 but I get horrid leg cramps form statins. Just had a lab draw, potassium is in range and stable, so all I can suggest is statins? I’ve read where they can cause crmaps. Sometimes I don’t just get foot, calf, thigh cramps, but full arm cramps as well. Always at night, and it is a struggle to get out of bed and stretch the muscles out. I am gonna discuss with my HCP(again) about stopping the statins. I am not at risk for cholesterol problems and it is impacting my sleep and life!

It’s an awful feeling. You may just be built that way. I’ve had severe foot cramps most of my life, and it just kind of comes and goes despite a healthy diet and supplements. Sometimes I get them after wearing a pair of shoes I haven’t worn in a while, especially with any kind of heel on it. I swear by those little Hyland’s leg cramp pills you can get at any drug store. They have a little quinine in them that works really fast to relieve the cramping, often within just a couple of minutes. I’ve heard that diet tonic water has enough quinine to do the trick too. 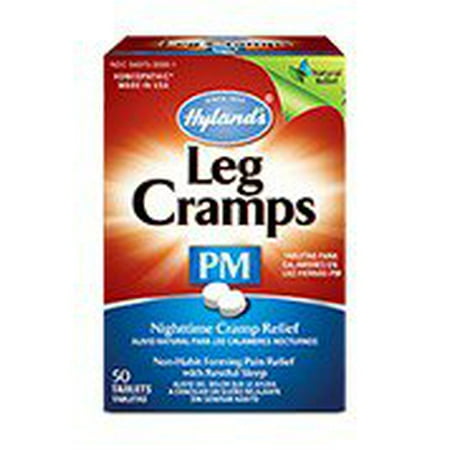 I’ve had some bad ones that would wake me up cussing up a storm. Wife would come in and ask what’s going on(I used to snore bad and sleep in separate room

). Told her both legs cramping bad. She’d get hot towels on them. I eat bananas, also drink water. Last Thursday I had another bad attack on them. Woke in tears. At least I wasn’t yelling and cussing like a few times. She was surprised I didn’t wake up the neighbors. Would usually happen around one or two in the morning. She’d be going “Shush, you’ll wake up the neighbors.” Told her it hurt so bad I didn’t care if I woke up the dead at that moment.

I have had cramps at times that seem to be related to low electrolytes. I take an SGLT2 drug as well as a diuretic so I lose lots of electrolytes. We are often told to cut back on the salt and I have come to believe this is not necessarily a good recommendation. I supplement with magnesium and potassium and use lots of salt. I mean lots of salt, perhaps 5-10g per day. My doctor regularly checks my sodium levels (as well as potassium) and blood pressure and I am fine. Now I rarely have cramps. Next time you have a cramp, drink some water in salt, if it immediately starts to relieve the cramping then you might be able to address the problem with more salt in your diet. But everyone is different.

This is going to sound strange but…try a tablespoon of dill pickle juice! A friend of mine is a serious cyclist and swears by this for leg cramps!

The worst leg cramps I’ve had were not related to blood sugar. Instead I believe it was related to taking statins. My legs would cramp so severely that no amount of moving them around would release the pain. Finally I discovered that I could relax the muscles by soaking in a tub of very warm water. There were times I’d have to get up in the night and get in the tub to eliminate the cramps.

After first eliminating the statin and later taking one at a much reduced dose, I was able to eliminate the really severe cramps. I still get much less severe ones, but never before 3 AM. So I strongly suspect that the cramps I get now are from being dehydrated. I’m on a diuretic and if I don’t drink a lot of liquid in the evening, it sounds logical that I might be a bit dehydrated by the early morning. And in fact I now always drink a mug or two of tea before I even attempt to test my blood sugar in the morning. Before that I could sometimes poke my finger up to a dozen times without getting enough blood for a test.

Have been taking a rx potassium supplement (with furosemide [lasix] along with a magnesium and calcium supplement for several months. This has significantly reduced occurances of leg cramps. Taking large doses of insulin can reduce potassium also. You have to figure out what works best for you.

I can tell you I had the worst leg cramps of my life (and I am a former ultra runner that lived at altitude in the desert) just prior to my diagnosis. Debilitating cramps that woke me up at night are what lead to my diagnosis of diabetes. Turns out my A1c was 12.2 and the body considers the legs “optional” so it dehydrates them first to flush the toxic levels of BG.

If you eat a balanced and healthy diet you are probably dehydrated and not electrolyte deficient. I know very few and I mean VERY FEW people that drink the proper amount of water.

If you are curious or suspect electrolytes because you don’t eat a lot of foods on that laist above get your GP to test your blood, no sense in spending money on supplements or other electrolytes if you don’t need them. That is what I did and she was like yeah your electrolytes are fine but you need to see an Endocrinologist RIGHT AWAY…

Here is the water consumption formula that worked best for me- take your body weight in pounds and divide it in half. This is the number of ounces of WATER you should drink every day. So I weigh 150lbs, that means I need to drink 75 ounces of water each day. If I exercise I add 8 oz for every 30 minutes I was breaking a sweat or out of breath. If I have alcohol I add half the volume of the drink (12oz beer = adding another 6 oz to my quota) because alcohol is its own toxin and needs more water to eliminate it.

IF YOU DRINK less your body cannot flush toxins properly and that is what your body considers high BG. I recommend not drinking within a couple hours of bedtime, or finishing your quota by dinner. I break mine into 3 portions so I can keep track of it, frankly drinking this much water is like a part time job

I would also recommend getting a tighter control on your BG. I was diagnosed in April of this year, my vision was getting blury, legs cramping. All of that resolved once I got my BG under control.

A1c was 5.9 in August, it is tough and requires extreme amounts of vigilance and discipline but in the end it is worth it every time I look at my meter and know I am KICKING DIABETES ■■■ one meal and one day at a time… Good luck, message me if you want more specifics

I don’t take statins, but I do have a spinal cord injury… recently, I discovered that diabetic neuropathy can also manifest as muscle cramps and nerve pain (I had thought it was just numbness and tingling… silly me

I started using CBD made from hemp oil because I read it had neuroprotective qualities… at a certain point, I reached the amount that stopped both. After years of debilititating random muscle cramps and nerve pain, I haven’t had a cramp in two weeks. When nerve pain starts, I take about 10mg of infused oil, and the pain stops.

Insulin stimulates our body’s intra-cellular uptake of potassium. That’s normal for everyone, diabetics and non-diabetics. If you have a severe high BG, you counter that by taking a large amount of insulin, and therefore a large quantity of potassium is pushed into the cells. That can lead to cramps.

Having too much potassium pushed into the cells is known as hypokalemia. If you go to the ER because you are in DKA, and they have to administer a large dose of insulin intravenously, they will add potassium to it, to replace what is being taken in by the cells.

Many poorly controlled diabetics however, have the opposite condition - hyperkalemia. Too much potassium, because they don’t take enough insulin to promote a healthy level of cellular intake of potassium.

Short answer - yes cramps can be caused by a large amount of insulin and the potassium it pushes into the cells.

But unless you know you have a potassium deficiency, or have been tested, don’t tinker with potassium supplements for that. They can be dangerous. Unless potassium pills have been prescribed for you, eat foods that have potassium, instead of taking pills!

I would strongly agree that if you have this problem that you should have your electrolyte levels tested and monitored periodically. Both too much and too little potassium can cause problems.

For short term relief an orange or brick pack juice with out too much sugar works for me and may work for you.