Hi everyone!
I’m getting a tandem t:slim soon, and I was just wondering, can I change infusion set but still use the same cartridge?

Or can I fill the cartridge with smaller amounts of insulin? I don’t use that much insulin, and I would hate to throw away a cartridge with insulin still left!

You can’t add as far as I know, once the cartridge is filled, that’s it. But you do not have to switch everything at the same time, you can leave the infusion set in and just replace the cartridge in, or the other way around. But you don’t want to leave the infusion set for too long, after four days I get a red welt anyway.
I find it easier to switch it all at once. And I hear you re: medical waste!

You can definitely fill the cartridge to its maximum and change only your inset until the insulin is all gone. But as indicated above, do not keep the same inset in for more than 3 days as it will cause irritation and, ultimately, a possible abscess.

If you want to change your infusion set, but not cartridge yet, all you do is insert a new set and discard the tubing. (I do save 1 spare set of tubing at any given time, for if I want to change the cartridge instead). You plug the old tubing that’s already attached to the cartridge and full of insulin into the new infusion set. The actual cannula buried in you is NOT full of insulin yet, though. So you go into the “load” screen and (skip over all the usual change cartridge/fill tubing buttons) select “fill cannula”. It’s super quick and easy. You’re pumping insulin again in just a minute.

If you want to change just the cartridge, that’s when it’s handy to have saved tubing from the earlier process. You just proceed as usual, using the reserved tubing.

You can also reuse the entire cartridge/tubing setup, but that’s more of an advanced technique. At least if you don’t want to spray 10 units of insulin all over your room. The pump won’t recognize any new volume of insulin until you go through the “load cartridge” step, and once you start that step, you’re forced to fill at least 10 units of insulin into the tubing. You would proceed as usual, adding new insulin into the cartridge when you’re supposed to be changing it and seating it back into place.
Right before you press the “fill tubing” button, you can actually eject the cartridge again. The pump doesn’t check for the cartridge again at this step. You still have to fill an imaginary 10 units worth of insulin, but you’re just pumping air. This is the tricky part:. You have to reseat the cartridge into place while the piston is still moving. If you stop the fill tubing process without the cartridge in place, you’ll get an error and have to start over. Same thing if you bump the piston too hard. It moves slow enough, though, that it’s not difficult to time it. I have the cartridge nearly in place but raised up just enough so that I can watch the piston moving. When it’s fully retracted back into the pump, you snap the cartridge into place. Stop the fun tubing process and finish like normal.

As usual, that takes a long time to explain in detail, but it’s really quick to execute. I actually do that fairly often when it’s inconvenient to do a full change out.

You can definitely add insulin to a cartridge. You just need to start the change cartridge after.

The tslim tells you it’s empty when there are still 50 units in there so you throw that away every time you change it.

So weather you fill it up and use it a few times or refill it, you will conserve insulin

The tslim tells you it’s empty when there are still 50 units in there so you throw that away every time you change it.

Whoa. That’s not true in my experience. How do you figure the volume so large? Given that wasted insulin is such a hot topic, that claim is concerning. If you’re seeing that much waste, your pump is out of spec and should be called in. I did see that once (more like 60-80 units) when I suspected my pressure sensor wasn’t working right, and they replaced the pump.

I withdraw the insulin from the cartridge and add it to my next one, and the volume is pretty much right at 20 units every time. More if there’s still usable units remaining, but I usually run the cartridges “dry”.

Even the user manual says there’s about 15 units of unusable insulin remaining. I’ve seen them say 15-20 units in other media, but don’t see up to 20 in the manual. 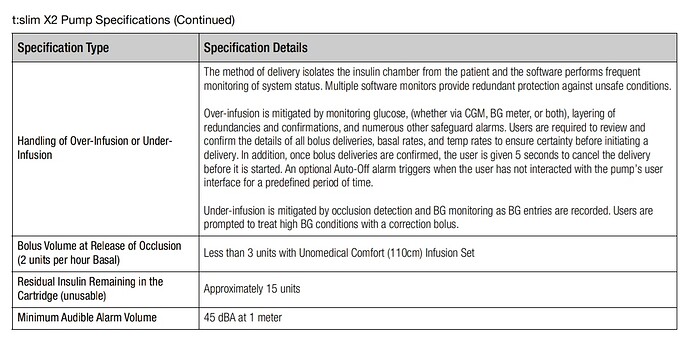 I tested it one time. I took apart the whole cartridge. I was able to draw 50 units.

Did you call it in? That’s not normal, per their own documentation.

Thank you for all of your answers!

Hey there @Robyn_H, I know it’s been a while, but it’s good 2hear that it’s possible to just change the infusion set without throwing everything else into chaos. Been pumping since 2002 but it’s my 1st day on the T:slim & I got so annoyed/discouraged/frustrated a few minutes ago when I realized the infusion set was no longer working right and that I had absolutely no idea how to address it. I was afraid maybe the newer type of insulin reservoir might require me to start all the way back at step 1, reloading (maybe even replacing eek) the cartridge. So thanks.