The Social Media Side of the ADA Scientific Sessions

I have to say, I was impressed with the social media aspect of the ADA Scientific Sessions. There apparently was a constant stream of events, I attended a few and I’ll talk about them. I also had a chance to meet some people face to face who I had never met before and that was wonderful. And then the highlight for me was the Happy Hour event put on by the Diabetes Hands Foundation (DHF). We got to hear my new friend and comedian Chelcie Rice and I had lots of opportunity to meet people and in particular the supporters of DHF. And the best part was that there an auction of three paintings by Manny Hernandez’s very talented wife Andreina Davila and I got to take home the painting on the left. The vast majority of people from the Diabetes Online Community (DOC) that attended were Type 1. There were only a few people with Type 2, but fortunately I had the opportunity to meet David Mendosa and Gretchen Becker both whose writings had an important influence on my diabetic career. 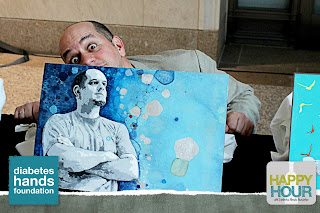 Brian – Great report. I’ve read several and yours is amoung the best. Good that you were able to connect with a few T2Ds. Although, with your MODY testing, you may end up in one of the smallest slices of diabetes instead of the largest!

I also see big industry player’s intense interest in the T1D online community. What I find underwhelming is their relative inability to translate real community interests into hardware and software reality. They are making gains but some of the designs I view seem much more influenced by engineering and regulatory influences. I feel that diabetic influence is not built into the DNA but added at a stage too late to have a large effect.

This is just one person’s perspective and I have witnessed some significant progress in recent years.

Thanks for your view of the ADA. It gave me a good glimpse of the event.