Type 2 Diabetes Remission: What is it and How Can it be Done?

By Emma Ryan and Jimmy McDermott

Type 2 diabetes is traditionally described as a progressive disease – without major lifestyle changes, A1C levels will gradually increase over time, and more medications such as insulin will be required to manage diabetes. Thus, people with type 2 diabetes are often surprised to hear that they may be able to “reverse” their diabetes or put it “into remission.”

Because reversal can imply a permanent cure, a more apt term for this topic might be “diabetes remission.” This generally means reducing A1C to the level of someone without diabetes (less than 6.5%) and either eliminating diabetes medications altogether or limiting medication to metformin.

While this is not be possible for everyone with type 2 diabetes, it is an exciting option for some. This article defines diabetes remission and discusses three evidence-based methods to obtain it:

We also share practical tips from a person with type 2 diabetes who has been on the remission journey for two years.

What exactly is diabetes remission?

Current scientific thinking suggests that weight loss is likely the driving force for remission in type 2 diabetes. According to one theory, the “Twin Cycle Hypothesis,” when extra fat is deposited in the liver due to weight gain, fat accumulates in the pancreas and impairs insulin-producing beta cells. Many believe that reducing fat in the pancreas through overall weight loss helps restore normal insulin production.

Because reversal can imply a permanent cure, a more apt term for this topic might be “diabetes remission.”

I think words are important and agree with this quote. Remission has a well-understood meaning in a medical context. I think the use of the word, “reverse,” is disingenuous and an over-reach by those using it. Remission of T2D symptoms is a great achievement and one needn’t imply something that’s not there.

Semantics aside, I think the recognition the small but growing group using the tactics of a low-carb, high-fat (LCHF) way of eating as a high percentage tactic to restore health is a hopeful development.

If people are looking for a way to get medical assistance and coaching using the LCHF way of eating, there are two programs that look credible to me.

I have no interest in either of these two business but I’ve recently heard live presentations by Dr. Sarah Hallberg of Virta Health and Dr. Eric Westman of HEALclinics. They both made persuasive arguments that their tactics hold great promise for placing T2D into remission.

Sorry to dive back into the semantics pool, but “remission” should be changed to “control.” “Control” includes an element of continued actions expended resulting in the “control,” without which the “control” is lost. I do hope my wording is understandable…

I agree with your logic about the word, “control,” in that it better portrays semantically the actual experience. Unfortunately, the word, “control” carries some negative baggage that does damage to people with diabetes when interacting with their health care provider. Here’s a 2017 paper that discusses this topic: The Use of Language in Diabetes Care and Education.

This paper, with inputs from diabetes patients themselves, looks at many words used in the patient/doctor relationship. “Control” is one of them. 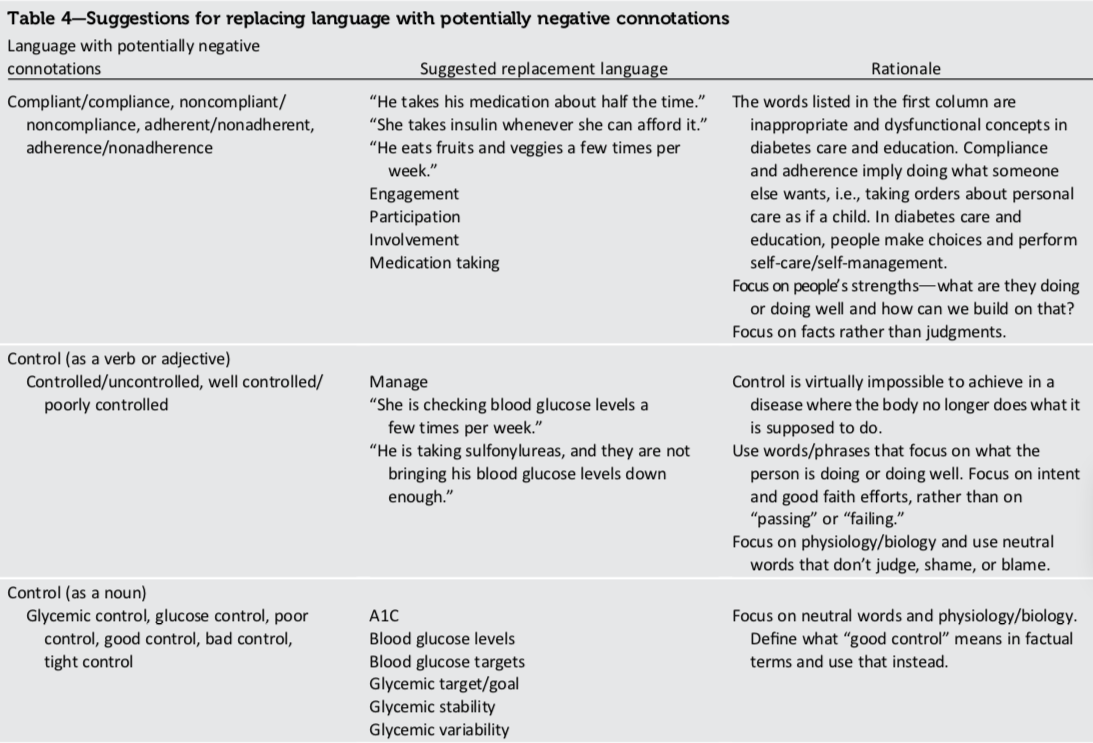 I seem to keep repeating myself. Low carb is not new, nor a small and growing groups. I was introduced to a low carb woe program in 2009 by my PC.
The goal was to be six or less. But the method was to keep testing to see what food you could handle. Metformin only Adding as much exercise that is comfortable. Age 63 Most who started this program have continued with like results to mine.

This article does not stress exercise enough. Very important.
At year 10 now, age 73 and even though it was a very stress full year, deaths, moving etc (life gets in the way). I still have no problem keeping my AIC at 5.9 or under.

If there is any progress or growth is that the medical/ diabetes might have changed their opinions. I really got tired of being told low carb would kill me.

Terry4, I read the paper about as far as your screen shot. You are right and “control” does have some bad connotations, although to me it seems to be a good word because I strive for “control” in all aspects of my life.

A better word is “managed” rather than “controlled.” “Managed” has the same connotation of being “in hand” but lacks the negative baggage that you allude to.

My beef is with “remission,” which implies a complete temporary cure, which we all know does not exist.

My beef is with “remission,” which implies a complete temporary cure, which we all know does not exist.

Part of the issue is that diabetes as a disease and the symptoms diabetics face are frequently lumped into the same basket. Many people can put their symptoms into full remission with proper control, yet, their diabetes is as real, alive, kicking and annoying as ever. Slip on the control for just a few hours and the remission promptly gets reversed.

I believe you all missed the point, there are T2’s out there that are well controlled, living a full and active life doing low carb. FYI it seems everyone is talking about KETO these days. Not that I do it or agree with it. But one the biggest advertising trends is to be KETO friendly. So I would be more concerned about lowering diabetics A1c than wasting time discussing terminology.

There is not cure for T2, but there are ways to control it.

I would hope sites like this would put its energy into helping people understand low carb, rather than discussing terminology.

Seems to be a lot of terminology discussion here these days.

In my opinion the two most damaging tends is diabetes care is the treat to fail ADA program and the non acceptance of low carb woe.

I would hope sites like this would put its energy into helping people understand low carb, rather than discussing terminology.

I think we can do both. Have you read the paper I linked to, the one about the power of words between a T2D and their health care provider? These words are now linked with measurable physical outcomes. They are not some squishy notion.

In my opinion the two most damaging tends is diabetes care is the treat to fail ADA program and the non acceptance of low carb woe.

As it comes to Health care providers, They are my consultants, I am not their experiment.

From the doctor who diagnosed me a T2 through now, they have all admitted they are not sure of what they are doing, other than trying one drug after another. My first doctor admitted she knew little, except to get me connected with low carb. Which I am thankful for. \

I fired a doctor that told me I was no longer a diabetic because I was not using medication. He accused me of enjoying playing a victim. (His words). He has a formal complaint lodge against him and he is prohibited from contacting me or discussing my medical history with anyone.

In my opinion it is up to the. Patient to find their way in diabetes control.

So words don’t Mean much to me. Most doctors just tell me to keep on doing what I am, since I am well controlled.

FYI I love my current PC, she loves my great control and when it comes to all those other medical issues. I listen carefully and follow orders. Except I refuse to take statins. LOL

I really should not be posting on this since I am T1. But some of these terms have irked me for a long time and the subtleties of language have always been dear to my heart.

I do not eat low carb. I eat 150 carbs a day, exercise,have good A1C, after almost 26 years have no complications. I am careful of what carbs I eat. But keto or low carb is a choice. I work hard everyday to keep things under control. I love my oatmeal and nuts in the morning. Supper is protein and vegetables. I also drink milk. Nancy50