What Frustrates You About Diabetes?

My beef is that it seems to be okay to be identified as the "diabetic girl" (even though the friends think they are helpful). I wouldn't say, for example "She's grumpy because she's constipated today. Happens every time." What is it about diabetes that makes others feel as though it is their right or their job to bring it up? We (as humans) are much more polite about other health conditions - what's the deal with us?

My rant! Your primary doctor who throws you under the bus, and calls you a hypercondriac. For the last 3 or 4 years I would experience days where I felt real bad, like I coming down with a flu. At the time when I first started experiencing this illness I explained to my then primary doctor. This doctor was very understanding and worked with me to find the root of this problem. About a year later this doctor up and left her practice. All her patients automatically rolled over to another doctor at the same office. Well, in the meantime my A1C rose from the upper 6 to 8.5 while under his care. He told me I was not taking care of myself, not eating right, not exercising and not taking my meds. Bull! I was, but why is blood sugars going up! I could eat AIR, and my blood sugars shot up like the Saturn 5 rocket to the moon. Not only my A1C was going up, my weight went up as well. I was frustrated to the max, nothing I did before seemed to be working! Then last November my company was busy making cut-backs. I was offered another position in the company as a service cable tech. Mind you, before I worked as video editor in the company's local origination department.

In January of this year I saw this doctor. I informed him of my job change, and informed him of how I was feeling. The flu like problem was becoming a daily thing. Moving forward to late March and April. The flu problem was getting worse! My wife was becoming very concerned about me because my skin color had changed. She called my doctor to see if I could be worked in. Doctor told her to send me to the ER. I was to point that I was talking out of my head. While she was on the phone with doctor, I made a statement that he overheard over the phone; "damn, I just want to get a gun and blow this headache out of my head!" He thought I was trying to commit suicide. As my wife and I were trying to head out the door for the ER, the sheriffs department called. They wanted to know if it was safe for my wife and if I had a gun. They offered to "transport me to the ER." We arrived to the ER, apparently the doctor had called ahead. The ER were treating me as if I was suicidal. I told the ER doctor what was going on with me, that included losing time while driving. Like having a mini-blackout. ER did blood work, found my sugar was running high and severally dehydrated. The ER doctor wanted to admit me into the hospital for treatment. They were going to put me on the suicide ward! I told them, no thanks, I going home. I was released.

Two days later the doctor was able to see me in his office. I was still feeling real bad, my color was off and could barely walk. The first thing the doctor asked me and my wife, did the sheriff show up at hour house. We both said NO! He then told me nothing was wrong with me and that I did not want to work the job that my company gratefully offered me. Feeling so weak, I looked back at him and said "The way I am feeling right now, how could I do any job let alone the one I am doing now." I did not feel like it safe for me to drive all day with what I was going thru. My doctor ended up sending me to neurologist. I told him what was going on, he was puzzled as to why my doctor sent me to him.

Anyway, under the advice of the neurologist I found another doctor and endocrinologist. The endocrinologist was very, very upset of my prior treatment. My former primary doctor himself was an endocrinologist and he did not see the signs. I was being treated for Type 2 diabetes instead of Type 1. The medications I was on was doing more harm than good. Enodo started me on insulin. Since April my A1C has come down from 8.3 to 6.5 and my weight has dropped as well from 195 to 170. Oh, what comes around goes around. Recently I found out, and it is official, the doctor that "screwed" me, lost his licenses to practice! Sorry for the long detailed rant!

Also talking about the ladder. The doctor that was treating me when I was first diagnosed with diabetes, specifically told me not to climb ladders. Wished I had got him to document that in a written letter.

Yeah, my coworker really is a walking public announcer. I have told her though, it is my business to tell whomever I wish. I truly think she is addicted to people giving her attention by her telling them about her medical issues. Just gets under my skin. If I had a friend trying to help, as yours, I would be less bothered :-)

You were a true victim of a Dr. not listening or caring enough to help you. I know men are not subject to such things but my female specialist caught glucose in my urine.
I was treated the same way with my diseased gall bladder. Dr. implied that I was making it up. Month after month I got sicker. That is when I learned how to fire doctors. That power is very much in my control.

I don't let it frustrate me. If my BG runs up, I take more insulin and if it runs down, I take less. My employer is pretty cool but I also have a desk job so testing, eating, etc. aren't any problem. I don't disagree that it sucks but I don't let it frustrate me as I'm not sure what I would get by getting frustrated. Every now and then, I run into periods where some number (DP usually...) isn't working and adjustments don't work and all that but, so far, when I keep at it, it will turn out to be "fixable" in that I can get most BG during the period to be ok, and that often takes care of some downstream problems too and then I feel good about it. That's about as good as it gets with D for me...

I know men are not subject to such things but my female specialist caught glucose in my urine.

I have a wonderful friend who takes my D into account, but doesn't make a big deal about it. If she hosts a lunch at her home, she lets me know the menu in advance, she also keeps the packaging for the various parts so I can see the carb info. It is all very low-key and much appreciated.

So does my male doctor.

MY MISUNDERSTANDING! I know that is the only time my urine was analyzed. Clarification needed I guess- my OB-GYN which I know men do not visit them.

Yes, I was told my condition is progressive so may never get better. Learning to live with it is an adjustment and I am still adjusting.

I understood your reply about the female specialist. My wife says lady doctor instead of OB-GYN.

When that occurs WE speak of ourselves in the "third person", to get the attention of the chuckle head(s) who broke all kinds of social no-no's, as well as ethical no-no's, in discussing our condition with anybody... whom we did not tell first ourselves.

Yes. I have a co-sorker that says "I am a diabetic. She is too." She seen herself as a "we" I guess but I do not discuss my condition with strangers like she does and then announces my condition too.
Evidently, she has done little to educate management about the condition...but perhaps people do not concern themselves unless they are forced to or really care about someone with the condition. I had to give a doctors note explaining my diabetic condition.

When you go on vacation, except that your Diabetes never takes a damn day off. Ever. 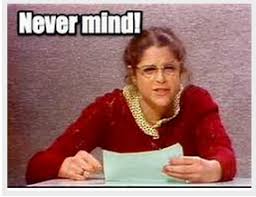