Who actually does two BG tests when restarting their Dexcom CGM?

I usually just do one and enter a similar number for the second test. Why waste another strip? The two are always very close (within 5 points) anyway.

Me - but I often use the same drop of blood.

I do two tests for the Dexcom CGM startup calibrations. I’ve had good insurance coverage to help pay for my test strips so I’m not under pressure due to the cost of strips. My two calibration numbers are not always within 5 mg/dL (0.28 mmol/L) of each other; they can be close or even exact but sometimes they’re as much as 15 mg/dL (0.83 mmol/L) apart.

I also usually do two fingersticks for each of the two daily required calibrations and then enter the average number. I know the meter accuracy requirements are looser than I’d like so I think taking the average of two checks will mitigate that situation. I am not well-trained in statistics so I don’t know if this averaging idea has any real merit, but I suspect it does.

I use my Dexcom as part of a hybrid artificial pancreas system that uses CGM readings to alter pump-delivered basal insulin in response to the Dexcom readings. I’m happy with the performance of this system for the six months I’ve used it.

I think following Dexcom’s instructions to use two startup calibrations is a good idea.

I always do two—I’ve found that they aren’t always that close, and starting off on the right foot calibration-wise seems key.

Where I do skimp sometimes is calibrating as frequently as it wants me to later on, if I’ve got a sensor that is clearly performing very well and has been very accurate for prior calibrations.

Like @cardamom says. I don’t always find the numbers are that close, not to mention I want to do whatever I can to make the thing perform as accurately as possible. I switch my lancet needles on a semi-annual basis but I don’t cut any corners when it comes to my CGM.

I usually do 3 tests if the first 2 aren’t in close agreement (then take the 2 closest). For re-calibrations, I might also do a 2nd test if the CGM and meter aren’t in reasonably close agreement. I’m currently covered pretty well for test strips.

I always do at least two. They are often not that close so then i do a third. I also do two on my regular calibrations unless the first number is really close to the number on my dexcom. Sometimes I do more because sometimes even with three I get such diverse numbers I want to throw the meter against the wall.

I use a Bayer Contour Next meter and typically the readings are very repeatable. When I used to use a One Touch Verio, the two readings were all over the place and I would probably do 4 and take an average or something.

Ohhh man! ive been using a Freestyle Meter and loved the thing, it was always very very accurate… lots of times my 2 calibrations would be the same number even though using different blood from different finger.

but i really like how the Verio IQ has that molded plastic “holder” that has a spot for the lancet device, strip container, and the tester… just E-Z to hold and use… and i like the molded case. + i can fit a few extra things in there if needed and nothing ever gets smooshed.
but my worry has been that the Verio is significantly less accurate. i haven’t reviewed my numbers enough to really have a good estimate to how much it could be off, but id be curious to hear what you think … are you gonna stay on the Verio? My insurance now only covers those strips – luckily i have about 300 strip supply of the Freestlye ones, i suppose i will use as a double check or for the 2nd calibration test… i can ask for a medically necessarily preapproval to change back to the other strips, and will porobably get approved for that, but it is a bit of a hassle. soooo… gimme your .02cents or even your .04 cents, its hammer time! === anyone using verio IQ… any feedback would be appreciated. Thankkk Youuu!!
-chado 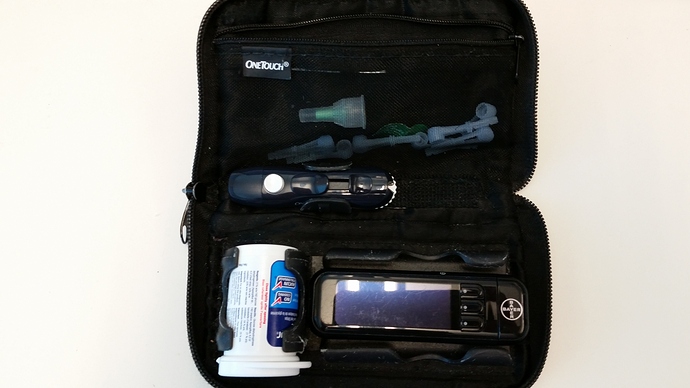 I use the Verizon and was wondering if there might be some benefit in comparing my results to a different type of meter - which I will now do. Thanks for posting!

I do, I have found that they can be 15 points different on two different hands the same finger on each hand. So yes I do both and always will.

I usually do both, but on the same drop of blood. My meter is usually quite consistent, within a few points of each other. Since I rely on my Dex exclusively for insulin dosing, I try to give it as much of a leg up as possible.

I do. Different fingersticks, diff strips, when i am prompted by the Dexcom.The tech support ppl also told me to calibrate anytime the reading is off by 20% or more.

Joined just to respond to this. Not sure how many of you are aware, but typical glucose meters are NOT accurate and that’s 90% of the reason you keep getting different readings. OneTouch for example is terrible despite all their documentation. They avoid telling you their MARD or “Mean Absolute Relative Difference” which is required for FDA approval. Right now, FDA only requires 15% or less variance.

So, for example, your blood glucose is actually 100, FDA requirements state that a reading of 85 OR 115 and anywhere in between is acceptable to be sold (FDA has been talking about lowering it to 10% MARD). I’ve tried with OneTouch, the only one my insurance will pay for and nope. They keep referring to their statements in their documentation which do not include their MARD… Dexcom and Medtronic typically announce their MARD (come on OneTouch!) and with variance on top of variance, you get somewhat inaccurate readings. ~15% MARD on top of ~10% MARD means you’ll get a <=~25% MARD or 75 or 125 reading if you’re BG is at 100.

So, I’m currently using a Precision Xtra which is not covered by any insurance and it’s meant for out of pocket patients. Their MARD for FDA approval was at slightly less than 5% which is great. Then when i sync my CGM with that reading, I add 5 points for Dexcom and use the same reading 2x without any additional pricks, etc. (I’ve found Dexcom, for safety sake on their part, always removes 5 points from your blood glucose readiung you entered). Then from that point forward, my meter and Dexcom are always +/- 1 or 2 points if not 100% identical (placement of the sensor on the body I’ve found affects it slightly – areas with better circulation get quicker & more identical results).

“The devil is in the details”

The lack of precision among glucose monitors is the reason I usually don’t bother to test twice. With the error allowance, I just don’t find it makes much difference.

I never do 2 test . I do , however make sure i wash hands before the calibration test. Have had Dex for years and T1 for 50. A1C is 6.2. Totally agree that the difference in metes results makes it most important to just stay testing with calibration with same meter.

When you use the same drop, are the numbers identical? I’ve never tried this. I usually try to do a finger on the other hand for the second test.

If you have ruled out contamination or faulty strip for the variation with the readings, it would be best to ignore both readings. It is best to wait until you have stable, near normal readings before calibrations are done.

Although I use MDI, I have collected a lot of data comparing Accu-Chek Performa and FreeStyle Optium readings.

For me, the Optium always reads higher with DP (dawn pheromones) and shortly after I have eaten. The Performa reads higher when I am physically active, have IOB and not eaten for some time.

Variable readings indicate that Blood Glucose is changing and you are calibrating using a moving target. Even if the readings are stable but different using different meters, you have to collect a lot of data to know which meter is closest to the true reading.