Read the fine print while ignoring the headline.

Is it ACTUALLY available to Medicare patients?

But still I am waiting to see something from Medicare that confirms this.

Not quite available yet. Libre met the criteria for coverage but Abbott is just beginning talks with CMS. Still, it’s a huge step forward. Dexcom fell 10% this morning. Considering the lower price & no fingerstick requirement, Dexcom needs to keep watch over their shoulders. 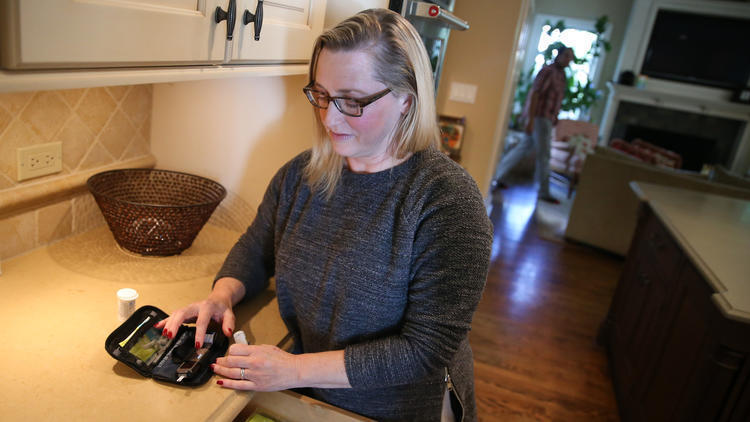 Medicare patients now have access to a pioneering device that lets people with diabetes monitor their glucose levels without finger pricks.

Libre isn’t a CGM, so I doubt Dexcom needs to panic, tiaE. It’s more like a meter that you can use without pricking your finger each time. that’s about it.

I wrote about this on Facebook’s Seniors with Sensors group this morning:

It’s unfortunate that we must deal with the confusing semantics here. Both the Libre and the Dexcom systems continuously sense and record blood glucose data. So using the term “CGM” to distinguish the Dexcom from the Libre does not make sense. Libre data must be deliberately requested or “pulled” from the device using a reader. Alternately, the Dexcom system “pushes” data automatically to an external reader or display. I think “push-CGM” and “pull-CGM” are better terms to avoid this communication confusion.

I think names are important and there needs to be some easy distinction regarding the differing functions of a push-CGM like Dexcom and a pull-CGM like Libre. Drawing the line at the “CGM” term will not work as much larger forces, like Medicare, see the Dexcom CGM and Libre system as CGMs.

I think Dexcom does need to worry about the business impact of the Libre. Dexcom has only been utilized by about 10% of T1Ds in the US and a much smaller slice of the much larger T2D business segment. The lower price of the Libre will attract many diabetics who currently use neither system. Stepping up from a handful of fingersticks each day to a system like Libre that reveals the current glucose data with a simple wave of the reader near the sensor will entice many current fingerstick testers. This is a winner for Abbott.

I think names are important and there needs to be some easy distinction regarding the differing functions of a push-CGM like Dexcom and a pull-CGM like Libre. Drawing the line at the “CGM” term will not work as much larger forces, like Medicare, see the Dexcom CGM and Libre system as CGMs.

The FDA is complicit in the confusion. If you read the snippet below (or the actual FDA News Release as linked) you can see that the FDA first calls this a FLASH device then calls it a CONTINUOUS device. Not cool. I expect MUCH better from the FDA. Terminology at the FDA level really does matter.

The U.S. Food and Drug Administration today approved the FreeStyle Libre Flash Glucose Monitoring System, the first continuous glucose monitoring system that can be used by adult patients to make diabetes treatment decisions without calibration using a blood sample from the fingertip (often referred to as a “fingerstick”).

You could go so far as to distinguish them as “Active” or “Passive” monitoring solutions. Active being that it sends the data to a device which has the ability to both record and notify based on pre-configured thresholds; Passive being that the data is stored locally on the device until requested.

One of the bigger challenges here is that while the Dexcom (“Active”) system will continually send results to an outside device which has a very large amount of memory and can store a lot of history (such as the receiver, insulin pump, or a phone), the FreeStyle Libre (“Passive”) system will only store so much data before it starts to overwrite itself and isn’t easily linkable to systems beyond the proprietary reader.

The marketing material on the Libre is very misleading when it says that it can store 90 days worth of glucose readings, as that’s referring to the Reader itself - not the sensor. If you read the fine print it says:

Sleep for 10 hours (I know, a pipedream, right?) and you’ll have a gap in your data.

Whether the Active or the Passive system is the right choice for someone is entirely dependent on how they’re going to use it. I, myself, prefer the Active system for many reasons - including the ability to monitor blood glucose using the devices that are already attached to me. I travel a lot, so having to carry the extra proprietary Reader on top of everything else us Diabetics have to travel with would just be a nuisance. You’d still need a standard glucometer in case the reader failed or you were questioning it’s accuracy.

Also, feel free to correct me if I’m wrong, but it’s also only approved for use in adults over 18 years old in the US - is it not?

“Active” and “passive” continuous glucose monitor are also better descriptors than simply the ambiguous “CGM.” People understand the difference between active and passive but not so much between “flash” and “continuous.”

You’re right about the FDA indication for adults 18+. Doctors, of course, can always write a Rx for off-label use.

While waiting for Medicare to cover the Libre, if you are a current dexcom user why not give the Libre a try for free? If alarming is not that important for you the Libre does a great job at trending. https://www.freestylelibre.us/cgm-experience

If you don’t like it after the free try and would rather use the Dexcom you got a free reader which are hot items on ebay.

After some Medicare fraud investigations a few years back, Medicare aggressively disallows Medicare beneficiaries from enjoying these kinds of deals. Sure enough, amongst the fine print of the Libre free offer:

Beneficiaries of Medicare, Medicaid, and other federal and state healthcare programs, residents of Massachusetts and US territories, and individuals insured by Kaiser Permanente, are not eligible for this offer.

If I was eligible, I certainly would take advantage of a trial like this.

Not available for free trial if on Medicare or government insurance!

You are mistaken about that Dave. The Libre is in fact a CGM. It checks your BG every minute and records the data before transferring it to the graph on your reader either in 15 minute increments, or whenever you decide to scan, whichever comes first. If it was not a CGM there would be no graph after you went to sleep for 8 hours telling you what your BG was during that time period etc. It may not have many of the bells and whistles of some other CGMs but it is not simply a prickless BG monitor.

Used tgst in the U.k and give wrong readings

call it a “CGM” all you want. For me, it isn’t really what the term “CGM” literally means, and for that, I REFUSE, let me repeat, I REFUSE to refer to it, or think of it, as a “CGM”. But you go right ahead. As long as no one browbeats me to refer to it as a “CGM”, I’ll let it pass when you all want to call it that.

(post withdrawn by author, will be automatically deleted in 24 hours unless flagged)

It’s a small point in the discussion, what we wish to call the Libre. Can we let that point rest?

The more important point we should all keep in mind is that a lot more people with diabetes in the US will soon be able to watch their glucose number much more frequently in an easier way. Just think of all the learning that will take place once people see what different meals do to their blood sugar. This is good stuff for the sufficiently motivated!

You’d still need a standard glucometer in case the reader failed or you were questioning it’s accuracy.

Note that the Libre reader is a glucometer. It can test blood glucose and blood ketones using FreeStyle Precision strips.

Since you insist on continuing to argue, after I said don’t browbeat me, it’s as much a CGM, as Medtronic’s latest pump is an “artificial pancreas” or a true closed-loop pump. It isn’t either of those things. The Libre doesn’t provide 280 readings per day, unless you are going to stay awake 24/7, waving the receiver over the site every 5 minutes. Therefore, it doesn’t provide “continuous”(for practical purposes, CGM’s that provide an update every 5 minutes, are considered “continuous”) monitoring. Give it a rest, please. I offered an out, earlier, but you just keep on with the insults (your smiley face doesn’t let you off the hook for being rude).

Yes, while this may be true of the unit, in this case I actually meant if the “Reader” failed as a whole (would not have been my first product name choice) - as in would not power on, etc.

If it was that I was questioning the accuracy of the unit, personally, I would want to use an alternate source entirely - such as a different model or brand unit. I usually keep two types with me. This has the added upside of also forcing me to carry two different kinds of test strips in case I end up with a bad batch.

That being said, I’ve never had much luck with the Precision glucose test strips from an accuracy standpoint, and their packaging is less than ideal, so I probably wouldn’t use them - but I’ve found their ketone strips work well. Either way, it’s nice to have the option built into the same unit. I’ll give them that.