I am juggling a couple of tech decisions. I am very happy to have just ordered an Apple Watch 2. I skipped the original Apple Watch and never used Nightscout or a Pebble Watch.

I have been using a G5 for almost 6 months, but still have an unused G4 transmitter. Because I will be going on Medicare in 2017 and will lose CGM coverage, I don’t want to abandon or give away the G4 device. Will it work with the Apple Watch using the Follow app?

I have gotten the message of death for my current G5 transmitter and am trying to decide whether to switch to the G4 transmitter now or use another G5. Although I will keep checking my local Apple Store for my watch, I have ordered it online to assure getting it. I would be sorely disappointed to get the watch and not be able to see my Dexcom data.

Yes, this is a problem of privilege and I am enjoying every minute of it before I go on Medicare in early 2017. #firstworldproblem

Hi, Laddie. I own the first Apple Watch and have used it with both the G4 and the G5. I’m currently on the G4 since I prefer it to the G5.

The G4 Share, which I assume you have, uses the Share2 app that runs on an iPhone. The signal from the G4 transmitter travels to the G4 receiver, then to the iPhone, and finally to the Apple Watch. You need the transmitter, receiver, iPhone and watch to be within transmitting distance in order to see the BG display on the watch. If you leave the house without the phone then you lose the watch display, too.

I like the G4 since the transmitter typically lasts at least 9 months and sometimes more than 12. It is warrantied for 6 months. You know about the 112 day G5 transmitter performance since you’ve used it.

I prefer the G4 over the G5 since I think the transmitter economy is slightly better. While the G5 transmitter is half the cost of the G4 it is hard wired to last 112 days, so 224 days for two of them. My experience with the G4 is that it lasts at least 9 months and many report 12 month duration. So that’s a 1-4 month advantage.

The other thing I prefer about the G4 is that its screen is a black background instead of the white like the G5. When I look at the G5 display at night, it’s a bright nuisance.

There are lots of happy users of both systems. I love using my Apple Watch to monitor my BGs. It’s amazing to me how much more convenient it is to see my BG on my wrist rather than the seeming short distance to my belt. Have fun with your first world problem!

I consider Apple the embodiment of Satan, so I’m among those that is jealous to no end of you all, desperately waiting for the Android release of the Dexcom G5 app that was supposed to come out this year. Latest news I’ve seen looks like it will be 2017 now.

Why is this so hard? I’ve heard it has something to do with the FDA having their panties in a bunch about the greater risk of problems with the app due to the platform variability with Android and multiple device manufacturers. Hello? We’re talking a CGM here, not a pump. If that’s such a problem, just require Android users to carry the receiver as a backup. None of us will, but then that’s our choice.

As soon as Dexcom opens this up to Android, Android Wear apps for watches will appear right away.

I periodically get furious at Apple, but am “all-in” because of the ease of my life syncing up on all of my devices. We still own a Windows desktop and I suspect we will replace it with another Windows machine when it finally croaks (could be any day now).

I haven’t worn a watch in 12+ years since I got my first insulin pump (aka pocket clock). It will be an adjustment, but I really look forward to just lifting my wrist to see my BG. Since I was diagnosed in the days of urine testing, everything about this is quite magical.

Magic is right. There is no impediment to glancing at your blood sugar. Wow is that great. 41 years ago that was beyond dream able. It’s so inconspicuous. I’m glad non diabetics buy them but I don’t see much point for them. It’s the inconspicuousness they like. Fitness tracker is something. Garmin is bragging about voice activation. There’s was my first for running. It’s indispencible for runners.

I’ve been a smartwatch fanatic since the very first Samsung Gear was released. I currently have both a Samsung Gear S2 (the one I use), and a Huawei Android Wear watch (which I play with now and then).

It’s frustrating that all this technology doesn’t play together. The S2 is just better enough to have me choose it over the Huawei, but it has many shortcomings as well, particularly in the dearth of applications. Neither watch is likely to have Dexcom support soon (like weeks or months).

Having an engineering / software background, it’s maddening to me to see how slowly this comes together, when I know how easy it would be. The technical “challenge”, well, isn’t.

Welcome to the club! I am self financing but the comfort of having the G5 on the watch is worth every penny.

Hey @Laddie . . . I used the G4 with Share on my first gen Apple Watch and now use the G5. It is nothing short of amazing for me. Coaching my boys baseball, driving in the car, out to dinner, cutting the lawn, out for a run as @AARON10 mentioned . . . I don’t think I realized how often I actually took my phone out to check my BS. It’s awesome. I wish the sensor would talk directly to the watch without the bridge of the iPhone, but my guess is that would require more FDA regulatory approval.

Can’t wait to see what you think and let us know if you need any help!!!

I might need help and glad to know that there are lots of experts at TuD to help.

@Terry4 @mikep My Apple Watch 2 arrived today. I am currently using a G4 transmitter that I have leftover from my free G5 upgrade and am using Share2 on my iPhone 6s. I can see the Dexcom info on my phone by having the Dexcom app open. If I want it to be a complication on my watch face, do I still need to download and use the watchSugr app?

My latest G5 transmitter just time out over the weekend. I really wanted to start another G5 transmitter, but as I approach medicare with no CGM coverage, I need to use this G4 transmitter. Like Terry, I prefer the G4 screen on the receiver. I am just terrified that I am going to lose the receiver because I rarely used it with G5.

Thanks my D-Tech Gurus!

If I want it to be a complication on my watch face, do I still need to download and use the watchSugr app?

I’m using the G4 transmitter and Share2 app for my Apple Watch 1. I also have the watchSugar app installed on my Watch app on my iPhone. I’m not aware of any other option to see blood glucose + trend as a complication. And I’m not aware of any improvements available to the Watch 2 cohort. I’ll be looking to your experience for new things for the Watch 2.

As smart watch things go, I’ve used the first Apple Watch every day for my blood glucose for the last 18 months. I find it useful. the watchSugar app I noticed will often time lag for BG updates. In other words, the Share2 app is more timely. I do get the time of day on the Share2 display. My blood glucose is more important info to me so I like to give it priority.

I’ll try the watchSugar and see how it goes. I agree with you that I see the time with the Share2 app and don’t find the delay to be a problem. But it seems to occasionally revert to other screens when I open the watch. But maybe there is a way to have Dexcom be my default screen.

I’ve been back using G4 since Friday or Saturday. There is a lot that I like about it, but I did buy more G5 transmitters a couple of weeks ago rather than another G4. It is a fine line between being economical and having the newest features. My guess is that my next pump will be the Tandem X2 and it will eventually be compatible with G5 not G4. That is why I am using the G4 transmitter now for as long as it lasts.

But maybe there is a way to have Dexcom be my default screen.

When I lift my wrist I see this: 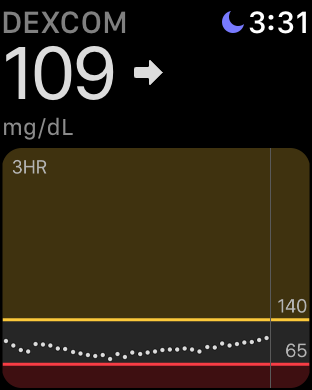 If you don’t see this and want to, I know there are some boxes to be checked/unchecked.

I found the path to setting display last app on wrist rise:
General>Wake Screen>Wake Screen on Wrist Rise > On

I set the watch to always wake up with the last used app. I didn’t see anyway to set it to always wake up to Share2. Before reading your post, it was set as “Within 8minutes of last use.” I’ll see if this makes a difference.

Either way it is quite amazing to have the BG number on my wrist.

I have the watchSugr app on my watch face, but will be very happy to always have Share2 show when I wake the watch.

Thanks for your help, Terry.

I don’t know any way to always wake up to Share2. I don’t use many apps on the watch. Have fun.

Try to have the watchSugar in your dock, apparently that will allow the app to update every 5 min in the new WatchOS.
I do like terry, keep the Dex app as my “home screen”… the clock is in anyways in the corner. AND you will get vibrations on your wrist when going over or under the set target range.

Thanks. I just added watchSugar to the dock.

I have a G4 and and Dexcom Share app on my iphone and apple watch. I do see the share screen automatically whenever I lift my wrist. I do not bother with complications. Here’s what I have setup:

This works great for me because the only activity I ever use my watch for is the Dexcom Share app. So it is there whenever I simply raise my wrist. -life changer!
oh and BTW, since the share app shows the time of day in the upper right corner I can see the current time on that same screen, so it still functions as an ordinary watch.
I hope this is what your looking for. Cheers!

I think that is how I have mine set up. I do use the watch for other things such as controlling music/podcasts and tracking my walks. I use the mySugr diabetes app and when I time my walks on the watch, the activity is automatically entered into mySugr and is one less thing that I have to type in.

I do have the WatchSugar app installed so that I have my BG as a complication, but it is very delayed compared to the Share app. So I don’t pay much attention to it.

Thanks for sharing what you do.