DaveWatch is getting pretty cool!

Okay, there’s the Apple Watch with official support from Dexcom, then there’s Android Wear with community support for Dexcom, and finally, there’s Dave Watch, the android App Widget based watch face for use primarily with Samsung Gear smartwatches, but can be used with any smartwatch that supports Wearable Widgets.

xdrip+ has some cool features to track and manage both insulin and carbs. Also, the app tries to forecast BG based on insulin and carb entries as well as BG “momentum” (how it’s trending).

When xdrip projects you’re going to go low, it tells you, and gives an estimate of how long until the hypo hits. I’ve added this to the display.

Finally, when xdrip+ forecasts you are going to be above or below target based on accounting for insulin, carbs, and current BG, it will recommend a treatment (eat some carbs, take some insulin). I’ve added that information too, when it’s present. While it’s hard to see the 9.9U overlayed on the syringe, and the 50g overlayed on the hamburger, that’s an artifact of taking the picture… it’s quite clear and readable on the watch. 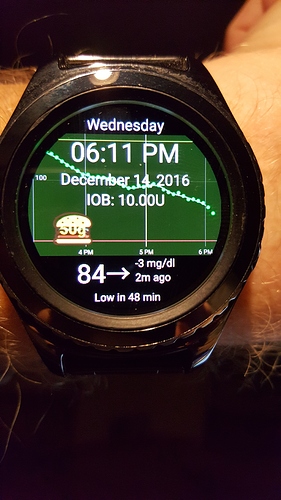 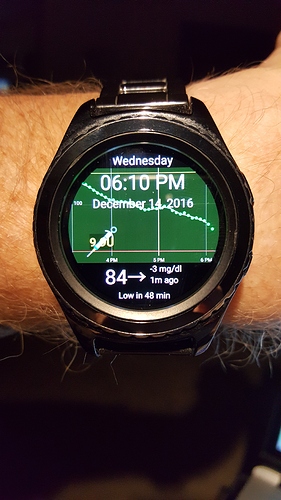 Oh, and before you ask, I simulated those recommended “treatments” by first telling xdrip I’d taken 10U in the upper picture, at which point it dutifully told me to eat 50g of carb based on my current BG (84), current momentum (heading very gradually down), and IOB.

Message me an email address and I’ll send you the APK. BTW, you can just use this version with your pebble no problem, the only difference you’ll see is there is another widget available to place on your home screen (and use in Wearable Widgets) on you Android phone.

If your still looking for a replacement for your Pebble, I’d recommend the Sony Smartwatch 3. That will work with all the xdrip+ features (including standalone), and you can also use Wearable Widgets with it and use my watchface if you like.

Hm… The version of Wearable Widgets I have doesn’t seem to have a Pebble option.

Hm… The version of Wearable Widgets I have doesn’t seem to have a Pebble option.

No… didn’t mean you could use the pebble with WW and my watch face, just that the version of xdrip+ that I’m building is based off the “released” version you’ve been using, so it will still work with the Pebble the same way you’ve been using it.

Ah. Thanks - that’s cool. Will wait for your email

Dave, do you feel that the xdrip is more accurate than the original app/receiver? I’ve read some posts on facebook that claim that, which seems a bit too good to be true. Also, do you experience big connection losses?

Dave, do you feel that the xdrip is more accurate than the original app/receiver? I’ve read some posts on facebook that claim that, which seems a bit too good to be true. Also, do you experience big connection losses?

That’s been my experience now, going on 2 months thereabouts. I have to calibrate less often to keep it accurate.

I have great connection results unless I try and use my Huawei Android Wear watch, which for some reason throws a monkey wrench into any communication with the G5 transmitter. I can’t say it’s the Huawei brand in particular – I need to do some debugging in Android Studio to see what’s going on with my combination of phone (Galaxy S6 Edge), Huawei watch, OS versions, etc.

Others have great success with other AW smartwatches, the Sony Smartwatch 3 in particular being popular.

My Dexcom receiver broke shortly after I started using xdrip+, and I keep forgetting to call Dexcom and replace it

Dave I love this and it looks great but I don’t know the first damn thing about wearable widgets or anything like that and wouldn’t even know where to start.

I’m an avid iPhone / iPad user but really like the idea of not having to have the watch paired to a phone to get the signal. It’s pretty obvious to me how to pair the Apple Watch (which I don’t have) but you might as well be speaking Chinese to me in this discussion. Can you explain it to me like I’m a moron how to make this happen? I just ordered a G5

Hi Dave. I’m using my Sony Smartwatch 3 as my primary receiver now and would really like to put your watch face on it. It looks very cool and fully functional. Any chance you would send me the apk?
Thanks.

Hello i would also like to get the apk. can someone sent me the apk.

Dave I love this and it looks great but I don’t know the first damn thing about wearable widgets or anything like that and wouldn’t even know where to start.

One of my friends tried to use the xdrip and couldn’t figure it out. Probably no point in trying the watch.

Unless is there a guide available that gives beginner level info on how to get these apps functional or is this really for the “do-it-yourself” person who already has experience with these sorts of apps and widgets or whatever they are?

I am very interested! Could you please send me the apk.

I wonder if there are any updates…?

Did anyone here ever get the apk for this?

edit from Marie: (I removed the email address. please private message dave by clicking on his profile picture and then clicking “message”. I’m not sure if he’ll get back to you, he hasn’t been around since August)

I’d not post email addresses publicly, if I were you. Itś safer to share personal information via a private message.

Hi Dave.
I have a Samsung Galaxy Watch, how can I use yours watch face?
I use Freestyle Libre sensor with miaomiao reader and xdrip+.
Thank you for your attention.