Well my book came in… Now time to take notes! Feel free to tell me your opinion about this book. I love reading everyone’s take on things related to diabetes. Have a wonderful day people! 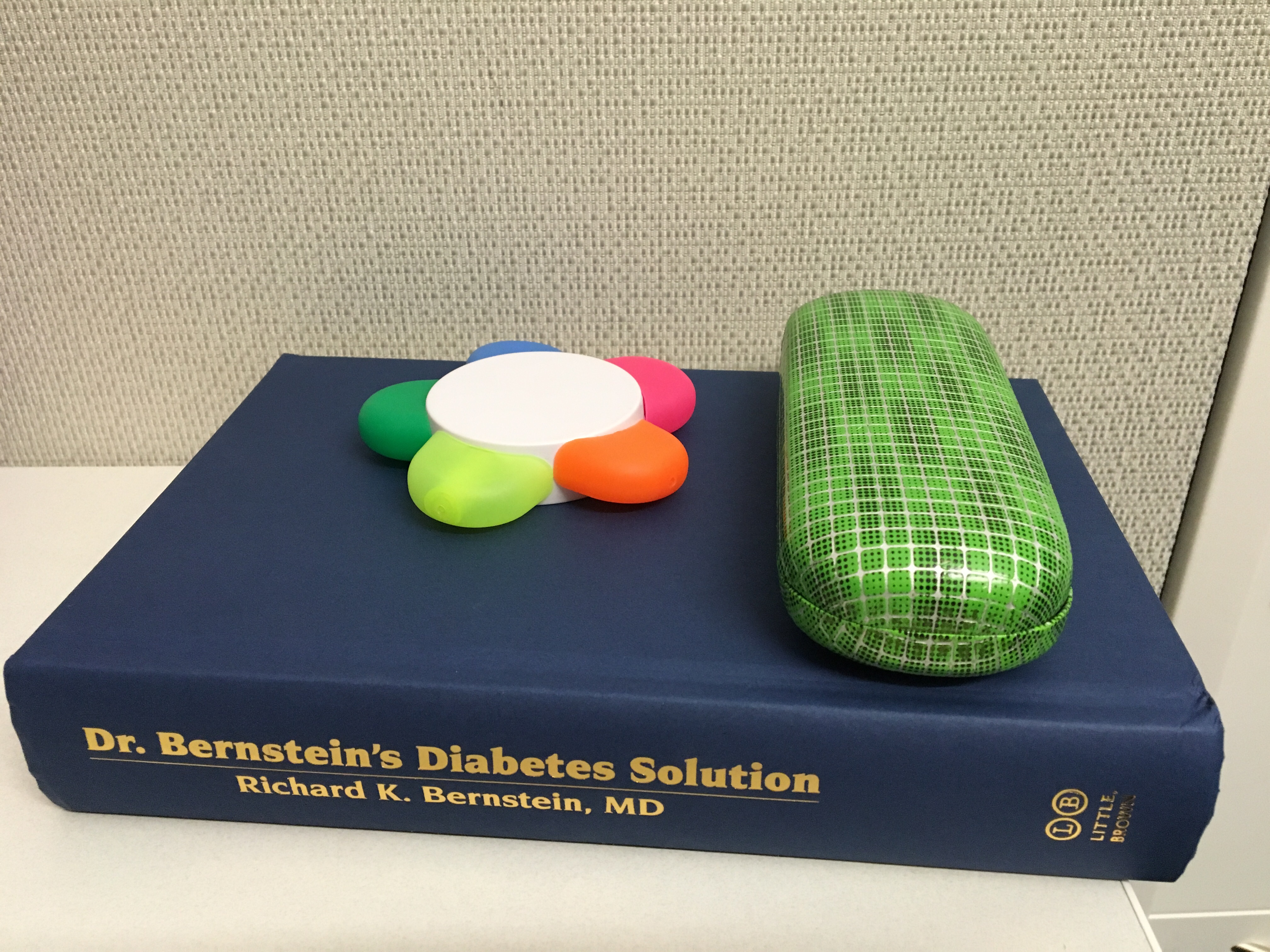 He’s got some good info and was kind of a pioneer in tight control. Sometimes it seems to me he goes so far to be a non-conformist and take contrary positions to the establishment that he ends up a bit out in left field. I enjoyed his book though and have had success applying some of his principles.

This was the first serious diabetes book I read and still one of the two best. (The other is “Think Like A Pancreas”.)

Bernstein is a pioneer, pure and simple. I won’t relate his story, fascinating though it is; he does a better job than I could in the book itself.

As mentioned above, his approach is too Draconian for some people. Not that it doesn’t work—some just find it too severe while others don’t. Different strokes. But it’s not necessary to follow his advice slavishly, to the letter. The correct approach to ANY expert is to take what you can use and leave the rest. And there’s a great deal here you can use. In addition, there is a ton of good background information about how diabetes works that can help fill in blanks and lend perspective to the job of management.

I agree with the others - he can be very polarizing, but it is definitely a fascinating read. He’s my endo, and if I had to distill the benefit of his approach down to one thing - it’s managing this using the scientific method. In short - measuring/logging and then changing one variable at a time to achieve optimal results. The one thing I don’t follow is his recipes. He’s a brilliant Dr., but a horrible cook.

He’s a brilliant Dr., but a horrible cook.

That also matches what I have heard others say. LOL

He’d be my endo, too, if I had a private jet. (Of course, if I had one of those, I’d be living in the Hamptons anyway, and he wouldn’t be all that terribly far away.)

While he’s clearly got many things right, I find him too extreme and far too polarizing for my tastes. He appears hell-bent on cutting off his nose to spite his face at times. IMO, his strong opinions blind him to things backed up by solid scientific studies, e.g. the advantages of pumping insulin (I agree, not helpful for everyone, but an exceptionally useful piece of D-tech for many). Normally I’m not one to throw out the baby with the bathwater, but I’ve made an exception in his case.

I believe Think Like a Pancreas by Gary Scheiner is a much more level-headed and helpful book. We call it “The Type 1 Torah” in our home.

I would love to meet him! How long has he been your Endo?

Really? I consider Gary’s book to be the Diabetic’s Deuteronomy!

I myself find Dr. B’s approach a tad extreme. It’s not foods fault that I don’t produce enough insulin any more. I also live close enough to my sister that I get to partake of her baking and cooking and her husband’s barbecuing, turkey roasting and forays into bread making. (The most recent highlight: apple pie with calvados pooled in the bottom of the crust. Calvados is an apple brandy from the Normandy region of France).

I strongly believe that everyone with diabetes should read his book. You will come away with the belief that it is possible to manage the diabetes beast. You will also learn a lot about ways to improve your blood sugar control. That being said, he is extreme and I believe that most of us can lead a healthy life with moderate low-carb eating. He is very anti-pump and IMO has some incorrect statements about the basal abilities of pumps in his book. I could never be a patient of his but I have learned a lot from his book.

I read his book a month ago and immediately began following most of the guidance. I’m still using my pump and CGM. I’m not using his recipes. But the ideas in this book, to me, were revolutionary. I’ve just been so surprised to learn that while I went nearly 30 years with diabetes without knowing about LCHF diets, all the diabetics in my life were aware of it, as was my doctor. No one thought to mention it? Argh.

Good read and there’s a lot that you can take and help improve your control. I will say that I don’t believe some of the things he says about his condition and complications he reversed. He claimed to have severe gastroparesis that he controlled by popping antacids. Trust me that is not a severe case. Not to say he might not of had some symptoms of gp, a severe case is one where you lose a lot of weight, vomit every time you eat and have nausea 24 hours a day. Antacids does not help that.

I found Bernstein to be a great starting point to really entering a more controlled approach to my diabetes. I find his book for me potentially a little too dogmatic. Having also lived with Type 1 diabetes for 18 years after coming across him, his basic concepts of using insulin and how to test your blood glucose and so forth I largely found were things I was already familiar with. Interestingly enough though, no endocrinologist had ever made the suggestion that I inject my Basal morning dose (which at the time was 20 units) into two injections. After changing this habit I ended up reducing my basal dose in the morning from 20 down to 5 units. So he still offered some revelations.

I find his suggestions in regards to food to be a little strange. Not in regards to suggesting a LCHF diet but more broadly the actual suggestsions he makes within this, and I don’t really agree with his complete approach to the whole 6, 12, 12 for carbohydrates as being the only approach. I also felt that he misses some really interesting new issues that are currently being more widely looked at in regards to LCHF diets and how they impact your health.

My opinion is that he is a great starting point if you are completely unfamiliar with living with diabetes, or LCHF approach. However, I think it’s a mistake to use his work as the definintive answer to controlling diabetes and there are many other resources he should be used in conjunction with.

Bear in mind that the 4th edition of the book, which is the most recent one, is already 5 years old.

Maybe it is time he updates his thoughts, including integrating into the diabetes community

Typeonegrit is an offshoot group who follow his teachings. They have phenomenal recipes. So does this lady:

I think Berstein’s approach is sound, and taking his principles rather than every single word is valuable. I learnt so much from this little, strong, principled and dogmatic man - far more than from my dr who just gave me a prescription for mixed human insulin (70:30) and sent me on my way with only a small brochure from the drug company. Some would find Bernstein’s dogmatism obnoxious. I admire him. He is a pioneer. He has contributed tremendously to how diabetes is managed, and gives people the tools and knowledge to manage their blood sugars (empowering pwd). He is still going strong at 82!

He was the Dr to push so hard for home glucose monitoring for every person with diabetes.

The low carb approach is helpful. However, I certainly don’t think everyone, or even most people should only eat so few carbs - but actually he doesn’t say one must eat so few carbs, he says each person needs to find their own personal tolerances.

His information on using insulin and other medications is useful.

I totally disagree with him on artificial sweeteners, and would never touch the stuff. 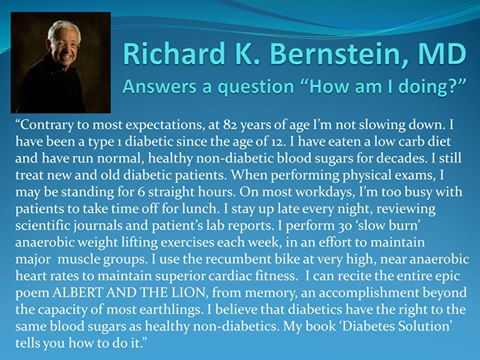 bernstein isn’t LCHF, perhaps you should read his book again.
he is 30g carb and higher protein, caveman paleo type of thing. whatever fat comes with the food is what it is.

In my opinion Bernstein’s recommendations on eating are LCHF. I would suggest that LCHF is more of an umbrella term that covers a number of ways of eating, pone of which is also paleo in my opinion.

If you’re restricting your diet to 30 grams of carbohydrates then the majority of your energy will come from fats. Which is exactly what Bernstein actually recommends. In fact if I recall correctly he still records moderate in take of protein. So most of his recipes would probably have about 60-70% of the energy coming from fats.

IMO, his strong opinions blind him to things backed up by solid scientific studies, e.g. the advantages of pumping insulin (I agree, not helpful for everyone, but an exceptionally useful piece of D-tech for many). Normally I’m not one to throw out the baby with the bathwater, but I’ve made an exception in his case

Another poster in this thread talked about a group who “follow his teachings”. That about sums it up - likening him to an Old Testament prophet. Although I would not dismiss everything he says as without foundation I cannot feel any respect for somebody who is prepared to wilfully ignore the scientific evidence/data if/when it conflicts with gut intuition.

There have always been people who thought that the low carb diets were appropriate and effective for management of diabetes. But after the discovery of insulin, most of the medical establishment thought that those with diabetes should lead a “normal” life, eat what everyone else does and most importantly, they failed to accept that high blood sugars caused complications. And then when the myth of the dietary fat/cholesterol/CVD link was created in the late 50s there was a fundamental shift to everyone being told to eat a low fat high carb diet. And all the diabetes medical community just bought that story lock stock and barrel. And anyone that stood up and said otherwise was harassed out of the room.

But you know, the truth will set you free. Bernstein was a total pariah for many years. It was only in the reporting of DCCT that his position that high blood sugars caused complications was finally validated with incontrovertible evidence. But still the mainstream continued on the boneheaded low fat diet nonsense. And to this day Bernstein battles with the ADA and mainstream about their flawed advice. And yes, he is eccentric and cranky and obsessive. But you know what, he has kept up the battle for decades and if he wasn’t this way the system would have chewed him up and spat him out long ago. I admire him for his efforts.

In celebration, here is a video from a decade ago of Bernstein and Warshaw on DLife. This video still cracks me up.

I’m a vegan so I can’t eat the way he recommends, but I have found wonderful information in his book, plus I like his attitude. The first 20 or so pages of the book drew me in and I couldn’t put it down. I have applied some of the dietary information to my own diet, and I now eat less than 60 carbs a day, which I’m told is considered low carb. The results have been spectacular, and my endo is a very happy medical professional now.