How much is 1 unit of insulin?

Maybe a silly question, but how is one unit of insulin defined? I know it is 1/100 ml of U100 insulin, but back in the days with U40 and U60 insulin that was different, obviously.
So how is one unit defined? is it in mol? and who made the decision on how much one unit is? is this historically explainable?
Would be really curious if anyone had answers.

"Units" of pharmacologically active substances are/were historically defined using some sort of easily carried out assay. Doesn't make any difference whether you are using U100 or U40. That just indicates the concentration of insulin.

According to Wikipedia, 1 Unit of insulin was originally defined as the amount that would bring about a reduction in BG of 2.5 mmol/L in a fasting rabbit. I should imagine that this was the easiest or probably only way that the early researchers in the 1920's and 30's could measure it.

U100= 100 units of insulin per milliliter of fluid in the vial.
So 1 unit = one hundredth of a milliliter.

One unit of insulin is one unit no mater which kind, each insulin strength has
has it's own syringe. One Unit of U100 has the same amount of active ingredient
as one unit of U40 or U60.

Clinically speaking, one unit of any insulin will lower a persons BG the same amount
but everyone's insulin sensitivity is diffrent...

How about this answer to your question, just to stir up some dust?

The National Health Service in the UK has negotiated a price of £15 for a 10 ml vial of any of the three rapid acting analog insulins. That works out at around 2.8 cents (US) per unit..

[I posted the UK price of insulin on another discussion a few weeks ago and got flamed by another poster who accused us Europeans of being freeloaders by benefiting from the research paid for by Americans via the higher US prices.]

I worked in a Pharmacy during my High-school days(1968,1969), pork insulin was under 2 dollars a bottle....and I remember some of the bottles being much larger than today's bottles. I also remember the Pharmacy did not markup insulin prices like other drugs....Bill the owner practically gave insulin away and was on a first name basis with everyone who purchased it. I delivered it to their homes and don't remember ever seeing a child that used it, they kept their children hidden from the public's eye...

Yeah, in the late 60's U-40 would've been most common. Even though the bottles were sometimes bigger (thicker glass?), I think it was still 10ml or 10cc per bottle and the net units per bottle was still less.

By the time I was diagnosed U-40 was on its way out, and they didn't keep us all locked up indoors away from public eyes but those days were still recent memory to my older relatives. 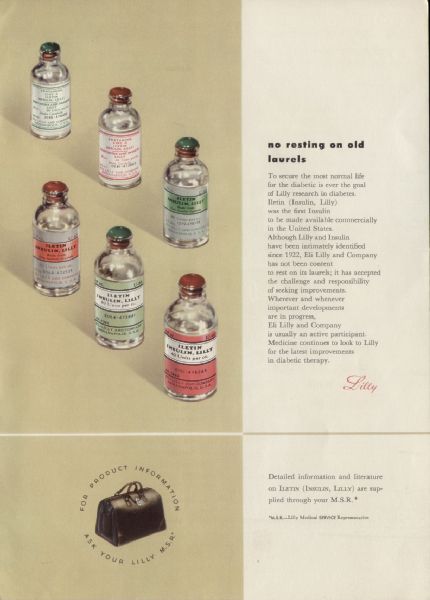 Thanks Joel!
So is this 0.0347mg of pure insulin, the hormone itself without any stuff they add in there?

Not too difficult for the pharma companies to measure/assay. I wondered if there was a "standard rabbit" that they used in the "olden days" LOL

haha, i would love to meet that standard rabbit ;)
thanks a lot for this info!!!

I just filled my cartridge this morning and noticed that the box containing the vial of Humalog says 100 Units/ml - 3.5 mg/ml.

I needn't have bothered trawling though Wikipedia, although the number on the vial is around 1% higher. Does that make the Humalog really U101?

they probably just rounded it, lol

2.6 mmol/L is 72 mg/dl. Don't know what "normal" bg levels are in a wabbit, but that's a mighty big drop starting from a fasting BG, unless we're talking a diabetic wabbit fasting while also hyperglycemic.

Consider it a flame if you will -- it was not intended as such. What I posted in that response are facts, and the fact is US diabetics are subsidizing European (and Canadian) diabetics. This is why the same bottle of insulin costs us $125 and costs you $25 -- less still than even my insurance copay ($35).

It's not because the pharmaceutical companies are making money hand-over-fist in the US on these products. As I said in that posting, they're making a pretty mundane profit -- far less than most IT industry successes like Microsoft, Cisco, Oracle, Google, Facebook, etc.

While I'm sure it's nice getting your life-giving insulin for such a moderate price, it most certainly is NOT nice getting it over here for 5x as much, whether I pay directly, or my insurance pays for it. That's unfair price distortion -- me and all other american diabetics having to, essentially, pay the lion's share of your medication needs. This huge distortion has a very real, very detrimental impact on our healthcare system, the ability to meet the needs of diabetics, etc. We see postings about these problems here every day.

How different things might be if we all paid a fair market price for this insulin. Probably something around $50/1000ml. How different health care might be for US diabetics.

Yes, I resent the fact that I have to pay for your insulin.

What are the newer insulin analogs worth to you?

I know that fast-acting is worth a lot -- it allows me to manage my BG in a way that's near impossible with Humulin-R. Were I a T1 having to manage basal and bolus, this contrast would be even starker.

Am I willing to pay the higher cost associated with these technologies, to gain the enormous benefit from them? Of course.

Problem is, that increased cost nominally is about 2x what regular insulin is. If that is all we had to pay, I'd be fine with it. What's really wrong is that others expect US diabetics to carry the enormous costs of developing these treatments, while realizing the benefits.

Dave, what is this "fast acting" insulin? My insulin is Humalog.
It is slowish acting, in my view. I do eat more of a "normal" diet than most on this site. So, given that as a fact (not looking for advice on my diet), I do wish there was a faster acting insulin for my pump. It can take several hours after a regular meal for my BG to get back to normal range.

Hi Nell. I have found Apidra to be the fastest acting insulin, both on the pump and on MDI.

Interesting. I have seen others report they could tell no difference in the two. I may just ask my endo to let me try one sample bottle to see if it works faster. Thanks.

2.6 mmol/L is 45 mg/dl (which I should imagine is the original definition since the use of mmol/L is a fairly recent convention).

Gvien that an average rabbit might weigh perhaps 3 or 4 kg and the average person perhaps 60 to 70 kg, 1 unit for a rabbit is the equivalent to about 20 units for a person. It does suggest that rabbits are much less insulin sensitive than humans. 20 units would drop my BG by >20 mmol/L (360 mg/dl).

Perhaps the gave the rabbit a chinese meal afterwards.