Is there a magic number for insulin dosage intake?

I’m curious how many units people take a day of insulin. My average is probably 55 units a day. How do I know whether it’s too much if I’m most of the time not going low? I’ve been a diabetic for 20 years and I suppose there are some insulin resistance building up. But even then, when i first started with insulin, I think was probably around 40-45 units a day.

I read in some other posts that people are on 20units a day. What influences this? I’m beginning to feel I’m doing this all wrong.

Its not about units, its about balancing the two.

Everyone is different so be careful comparing your self to others.

for me 2 big things influence how much insulin I use.

How many carbs I eat per-day

How physically active I am.

Its not about units, its about balancing the two.

Bolus is very dependent on carbs, and may vary based on protein/fats depending on how much relative to carbs.

Some meals need a pre-bolus 15-30 before eating, if starting bg is high at mealtime. Or may do extended bolus (delivery over 1-3 hours) for high fat/protein).

I don’t think there is a magic number that would consistently work for me. Over the past few weeks, my total daily insulin varied from 46 units to 61. And my basal-bolus split is usually around 40% basal and 60% bolus but will vary too.

All that variation is caused by varying activity, my days tend to vary a lot but my meals are pretty consistent. I consider myself moderate carb: 175 + or - grams per day, more on active days.

My basal rates are very fine tuned with my pump on the rare occasion I fast I draw a pretty straight line across 24 hours.
I am 6’3 and 190. My basal is about 24 a day. And my bolus is 18 or so depending on the day.
It’s been pretty close to that for 32 years.
I take slightly more insulin now because I pay closer attention and I’m I better control.
You might have some insulin resistance , also your activity plays into it and how many carbs you eat.
55 doesn’t seem like too much. Unless you are gaining weight that you don’t want.

My basal rates are very fine tuned with my pump on the rare occasion I fast I draw a pretty straight line across 24 hours.

That is fantastic!! I don’t think I can fast for a full day😅. I’ve tried half a day but there seems to be other factors affecting like level of activity, hormonal changes, weather. After correcting, and repeating the exercise again I find things seem to vary again the next day. I can be doing the same thing on two days and fasting and get different results. So I can only boil down to hormones and temperature.

55 doesn’t seem like too much. Unless you are gaining weight that you don’t want.

Well it’s not too much about gaining weight; it’s more struggling to lose some and have for years.

Is 55 units is considered high on average for a diabetic? My basal bolus is about 40/60, my DE says that’s still normal.

@tedos - as long as your basal rates are set properly, your basal / bolus split is really just a function of a) what you eat b) amount of physical exertion c) exogenous medications and / or hormones d) how big / small you are e) insulin resistance 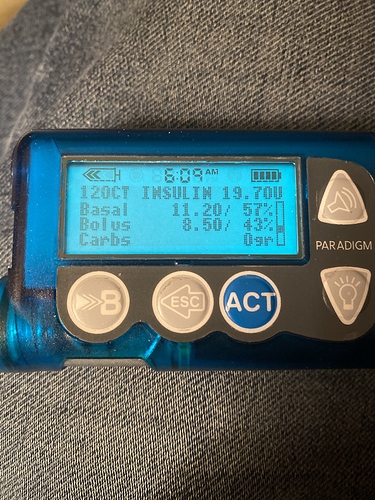 I’m not using any loop software and don’t have a Tandem hybrid closed loop pump. I suppose you Basal IQ and Control IQ pump users could use your preset basal rates to estimate your splits.

With the pump I’m using (MM 522) my basal splits are recorded even as I manually adjust them up and down (temporary basal) throughout the day.

I think the lesson here is your basal/bolus split varies day by day depending on your needs. That’s the way it should be, and you’re not doing yourself any favours trying to conform to some artificial split rate your doctor might have “suggested”. More than likely, they meant basal varies dramatically depending on diet. When I do 72 hour fasts, I take less than 10% bolus for micro adjustments.

my basal is about 75% of my insulin dosage. I eat low carb so my bolus insulin is pretty low.
The week before my period I have to up the basal from 0%-20%-every month is a surprise.

My experience with the amount of insulin I take taught me a few things about my health. For many years I took about 40-50 units total daily dose. Then I started a slow but steady march toward a higher body weight. I moved from 150 pounds up to a high of 183 pounds over a 10 year period.

When I received a gastroparesis diagnosis in 2012, that energized my motivation. My blood sugar control had deteriorated and my A1c slipped from the mid 6% range to 8.3%. At that point I was taking about 80 units per day.

I jumped into a carb-limited diet focussed on regaining blood sugar control. I was amazed that my excess body weight started to fall off without much exercise of willpower. My total daily dose of insulin fell to about 40 units.

From this personal experience, I believe that high insulin dosages lead to insulin resistance and metabolic dysfunction. When I was taking 80 units per day my time in range was low and the amount of time I spent hyper and hypo was high. My glucose variability as measured by standard deviation was high. I remember my SD was 60 mg/dL and higher.

I believe that a T1D who uses too much insulin creates metabolic syndrome and insulin resistance much like many T2Ds.

Finally, for those who would like to lose some weight, I’ve read that the body cannot access fat stores when insulin is too high. When I adopted a carb-limited diet, my daily insulin intake was cut by half, I lost weight and my glucose control improved by every measure.

I don’t think there is one magic number total daily insulin dose for everyone, even if you use a weight-based adjustment. I’ve read that doctors use 0.5 units of insulin per kilogram of body weight as a TDD starting point for a new T1D.

I do, however, think that there exists a pivot point for each of us and when we start to take more insulin than that, insidious metabolic things start to happen. It’s our individual job to identify that pivot point and take action when we exceed it.

I remember they harped on me about the 50/50 thing back when I first started on a pump, but I think it’s pretty old school by now. My basal is what it is because that’s what it needs to be, and I’d have to eat a lot more carbs than I do to raise my bolus insulin to 50%, which strikes me as rather pointless. I think the rule back then had to do with official versions of a “balanced diet,” which was packed with bread and starches and stuff I avoid mostly.

Nice to see I’m not the only guy still rockin the Paradigm.

with official versions of a “balanced diet,

I’m another person who long ago dismissed the basal/bolus 50/50 rule as outdated and contrived. Since I eat a carb-limited diet my ratio runs from 67/33 to 80/20.

I’m also in the ancient Paradigm pump users group; I use a MM722 as part of my Loop system. Medtronic did build durable pumps! Got to give them credit for that.

Ah, food exchanges—good times. No, this would have been when I was being trained up on my first pump at Joslin. They could download my pump data to see what the split was, and that was the first time I heard about the 50/50 split, which I thought was b.s. at the time and still do. But Joslin hung onto the Food Pyramid thing for a while, so I didn’t argue, I just nodded my head and went my own way. They were all about signing you up for nutrition classes and stuff and I didn’t have the time or want to be hassled. I had evolved the philosophy of “the less insulin you take, the easier it is to manage” on my own as a consequence of the R/N regimen and I didn’t see a reason to change it. I sure didn’t want some nutritionist looking over my shoulder and telling me to eat more carbs so I could bolus more.

Alas mine is a 723, one single firmware update too late to use for looping. It’s actually a replacement for my original pump, also a 723, which died of the notorious Button Freeze, but other than that I agree they are pretty bullet proof. I also have a 670G, returned to its original box after 6 months, when I decided that not only was Automode a waste of time but my old Paradigm was much simpler, smaller and easier to use.

I sure didn’t want some nutritionist looking over my shoulder and telling me to eat more carbs so I could bolus more.

Somehow the absurdity of this notion did not deter their adherence to policy and standards of care. Carb-up, shoot-up does not think through the consequences of taking ever increasing levels of insulin as the diligent diabetic carefully sums up the carbs, takes more insulin, gains weight and diminishes insulin sensitivity.

I think practitioners viewed the transition from the tyranny of the R/NPH regimen to treatment with the newer “rapid” acting analog insulins as liberation in that we could eat whatever we wanted as long as we dosed for it.

This wasn’t thought through too well and still exists in much of the advice we still receive. I think the people who suffer most from this ill advice are the newly diagnosed.

Agree with everything you say. I think there’s a combination of wanting to soften the blow—in the old days, it was more like joining the army: “Here’s your new life complete with hypodermic needles and a list of stuff you can’t eat any more”—and self-congratulatory overestimating the capabilities of current treatments. It is hugely better, no question. But attaching numbers to things gives a sharp-edged impression of control and precision over matters that are never that sharp-edged and often downright chaotic. I’m inordinately proud when I can achieve a soft landing after a carb-heavy meal; it’s rare enough that I want to brag about it but nobody knows what I’m talking about if I do, so a covert fist pump accompanied by a silent Yes! must suffice.

Gary Scheiner’s book “Think Like a Pancreas” has some nice charts to reference. You can look up things like weight or other formulas to see some suggested starting points. My settings have gone south lately so I checked back in the book and it was interesting how fairly accurate suggested settings were for carb ratio, correction factor and basals.