1 cup of chili powder sounds like a lot, can you tell us what brand you used? my preference is Penzey’s Medium

I use McCormicks which I get at Costco in a 20oz container. There is a lot of variation in chili powder and McCormicks is on the mild side. Also the slow cooker causes many flavors to dull over time which happens with many chili spices. This is why the chili powder is split into two. Competition chili recipes have two, three or even four sequences where you add spices through the cooking. And of course it is also true that I like my food on the spicy side. Despite that, my wife and son are hoping I didn’t overspice the chili.

Soon I’ll add my ice cream recipe so that anyone having overheating problems with my chili have something to cool them off.

oh I forgot about the slow cooker mellowing out spices over time, so it makes sense. here’s my chili recipe, which came in second last year at the NJ State Fair

Great with a sandwich on a cold day or as a meal with shredded Cheddar cheese or a dollop of sour cream on top, with fresh buttered bread on the side. Serves six to eight. Leftovers freeze well. Start with the full amount of regular or medium chili...

I only use one can of kidney beans to save carbs

oh I forgot about the slow cooker mellowing out spices over time, so it makes sense. here’s my chili recipe, which came in second last year at the NJ State Fair
https://www.penzeys.com/shop/recipes/good-basic-chili/

I only use one can of kidney beans to save carbs

You didn’t tell us you were a chili competition superstar. The recipe you gave was certainly lighter on chili powder but there was a lot of crushed red pepper. I imagine that gives a different flavor profile.

I don’t eat meat now but I used to, and from my meat-eating days this looks delicious

Thank you so much for starting a new recipe share! I’m looking for inspiration!

Best wishes to all!

Here are several of my faves that I had posted elsewhere. Need to find my holiday stuffing recipe, though—'Tis the season, after all!..These exchanges are always fun…

Some of My Personal Low-carb Recipes

I was recently asked for some of my favorite recipes that can work for a daily intake of 30-40 carbs. Some I can just point to on site in Food/Recipes: Walnut Cake from YaSure Yabetcha Kitchens; YaSure Yabetcha Cheesecake; Low Carb Holiday...

Showing this to my sweetie who loves a good chili recipe. He calls my old family recipe for chili “Minnesota Chili”----bland from the 50s. But at least it doesn’t incorporate cream of mushroom soup, miracle whip, velveeta or spam—those other Midwestern staples from the 50s!—LOL

Chicken Soup for the Soul

Carcase from roast chicken or turkey, or wings or drumsticks
cover with water and bring to boil, simmer slowly for about an hour and a half.
Turn heat off and fish out bones, sometimes it is best to strain this to make sure you have all the bones.
Add onion, carrot, celery sticks, capsicum, tomatoes, herbs, whatever other vegetables you like to eat to the stock and simmer for about half an hour until vegetables are cooked. Add seasoning. You can serve as is or put through your blender to disguise the vegetable content. Strip any meat off the bones, cut into neat pieces and add to the soup.

This is a very rough and ready old fashioned recipe which is still delicious. I am going to miss this soup in the warmer months ahead here in Australia.

In case you get tired of turkey I have a really good stuffed chicken recipe that is very popular on my blog. It’s pretty much carb less so not really any BG impact. 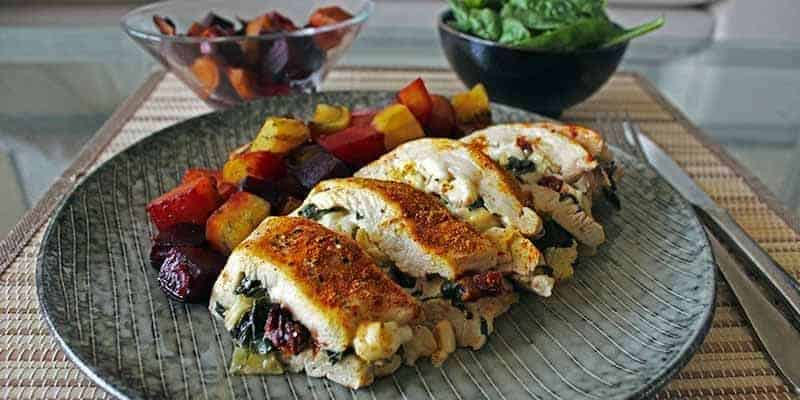 I could eat this Stuffed Chicken Breast every day! It’s tender, tastes fantastic, and is a healthy meal by itself. My favorite healthy chicken breast recipe!

I wrote up a blog last week about a low carb dish using spaghetti squash … called Low Carb Alfredo Carbonara (without the pasta) - you can find it at this link - or if you object to my posting my blog link - I will remove this post - and just put down the recipe without my silly words that go with it (sorry I forget what the rules are here at Tudiabetes … been away for abit … so don’t want to step on anyone’s toes and rock the boat) - http://www.therollercoasterrideofdiabetes.com/2015/11/low-carb-alfredo-carbonara.html

In celebration of the very important Jewish holiday of Hanukkah I am giving you you my recipe for Cheese Latkes. Latkes are a traditional Jewish food served during both Hanukkah and Passover. You don’t have to be Jewish to enjoy them. I would note that most recipes for Latkes are synonymous with potato pancakes and are pretty darn high carb. It is my position that since potatoes are a new world food, truly traditional latkes must be made from cheese. My recipe is is based on one from Tory Avey.

In a heavy griddle, heat oil (or butter) and cook the latkes similar to how you would cook pancakes, usually about 4-5 minutes

The estimated carb content for the entire batch is 85g, about 35g of which comes from the flour. You could readily substitute for the flour and get it even lower, but as written, this ends up with about 10g carbs for 2-3 latkes. Also, you could substitute for the sugar, but actually I found that the sugar made a big difference in how well the latkes fried, becoming caramelized and forming a crispy crust, hence I keep the sugar. If you really want low carb, substitute almond meal for the flour and splenda for the sugar.

Slice cucumber and onion (I use a food processor with the thin blade). Combine all ingredients together and chill in refrigerator for ½ to 1 hour before serving. Salt to taste when placing on the table.

This is a great summer salad but also can be a refreshing side dish for a meal that has a heavy or spicy entree.

Yes I know that you have all been waiting for this. Of course all the ice cream at the store is “fake.” Real ice cream should be made from “cream.” Instead almost across the board companies drop the cream and use milk or yogurt or some fake substance. This on is the real thing.

On a stove, slowly heat cream until it just begins to simmer, remove from heat. Beat eggs and add slowly to cream whisking to mix it in. Put back on low heat and bring up temperature until it reaches about 165-180 deg F. This should thicken and make a rich custard. Don’t overheat or overcook. If it boils, it is hosed.

Remove from heat, add any flavorings and splenda.

Put custard in refrigerator until it is totally cooled down (sometimes I rush it in the freezer). Please the custard in your ice cream maker and let it crank.

If you have not tried the low carb tortillas such as those from “La Tortilla” or from “Mission” I would urge you to try them. The ones from La Tortilla are 10g carbs, 7 g fiber and the ones from Mission are 13g carbs, 10g fiber. Although I generally make a more elaborate version, here is my enchilada recipe

Brown and drain crumbled hamburger, add taco seasoning and recommended water (check the taco seasoning pack). Cook according to seasoning directions. Grate cheese into a large bowl. Coat 9x14" pan with a layer of olive oil. Fill each tortilla with a generous helping of beef, onions and cheese and place tightly back to back in pan. Try to use about 2/3 of the cheese, leaving a generous amount for topping. I’ll often use more than a 1/2 lb. Make sure the ends of the enchiladas are snug. Pour and spread enchilada sauce on top. Add additional seasoning if you wish (ie. chili powder) and then spread the remaining cheese on top. Bake at 325 degrees for a half hour. It should be bubbling. Serve immediately.

I love Peanut Sauce, and have tried a lot of recipes for it. This is based on one I found for a Cole Slaw and is easy and uncooked. I use my mini food processor to make it. If you don’t have one, mince the garlic and ginger finely and whisk everything together. I use it on chicken sate, salads and grilled vegetables. It can be made one day ahead, refrigerated.

the entire recipe would be about 25 grams carb,

In our house we LOVE pizza. And frankly, it’s quite difficult to convince a 15 year old growing boy to eat anything other than the original carby pizza we all love. But, then I realized he loves mushrooms. So I then combined several portabella pizza recipes and came up with this family favorite. Use your imagination, the possibilities are endless.

On a jelly roll pan, spray two circles, about 3 inches in diameter, and place mushroom caps on top of the circles, stem side up.
Spoon 1/2 cup of the pizza sauce into each cup (use more or less as you desire).
In a small bowl, blend together the cream cheese and parmesan. Add seasoning and mozzarella cheese. Stir to combine.
Carefully stuff each cup with half of the cheese mixture.
Place 4 pepperoni slices on each cup, on top of the cheese.
Spoon italian sausage on top of the pepperoni.
Top with additional mozzarella cheese.
Carefully press down on each “pizza” to secure the toppings.
Bake in pre-heated oven for approximately 15-20 minutes, or until cheese has melted and is lightly browned.

Mix sauce ingredients and set aside in the refrigerator.
Mix Lemon juice and taco seasoning and spread on the fish fillets. Put 1-2 Tbl of oil in a skillet and fry the fish until it is done, about 6 minutes. Meanwhile, heat up your taco shells or corn tortillas, if using. This is also good on a cabbage based salad. Top with the sauce.

Carbs are depending on the taco shells or tortillas.

I use any yeast risen pizza dough recipe, when it is formed into a dough I give it a light knead, coat a bowl and the pizza with olive oil, put the dough in the bowl, cover with cling wrap and put in the fridge overnight.
It will rise slowly while it is cold, bring it out about 1 hour before lunchtime, knead again and roll out your dough. Top as required. I use pesto and bococcini cheese sliced to avoid the greasiness and problems with tomato sauce. Because the dough is slow risen it becomes Low GI bread, which of course is still quite high carb,

Above I mentioned the the low carb tortillas from “La Tortilla” and “Mission.” These can be used to make a low carb thin crust pizza. Take a tortilla, brush with olive oil on both sides and cook in a an oven at 350 deg F for 1-2 minutes on each side until crispy and just starting to brown. That will seal it and dry it to get a crispy crust which is sealed against moist toppings. Then take it out of the oven, coat with sauce and toppings and return until toppings are bubbling. You don’t need the higher temperature as with most pizza since you don’t need to cook the dough just to heat and melt the toppings.

Thank you so much for all the recipes!

I feel re-energized as a cook and will try several of these!

Best wishes to everyone–cooks and consumers!