Responses to Loved Ones

Often times I get accused by those I love and just those around me often of doing things for attention when my blood sugar gets low. Now obviously we know as type 1’s that this is not the case but I would love to hear some good responses to tackle this, specifically with close relationships.

I would consider it healthy to do something for attention when your blood sugar goes low.

You probably don’t want any of my suggestions for what to say to the people around you.

My mother, who has been living with us for decades, always freaks out. I’ve told her that when I am low don’t ask me any questions! _ And she still says "What can I do? Do you want me to get anything? What should I do? How did this happen? Way it something I did? Mostly I just ignore her.

That’s a tough one. Another POV friends and loved ones tend to take is “you just don’t take care of yourself, if you were more careful this wouldn’t happen”

Not so much attention, but my wife will say I’m using my hypos to excuse my behavior.

Funny thing is,she is also a pumper, will get low (not as often as myself) and will use the excuse of being low to excuse HER behavior. LOL! What I tell her is that if I’m persistently borderline low for quite a while it actually does make me cranky and I can’t help it. It’s physiological. I think we all want an excuse for our bad behavior, and low bg’s is something that qualifies as a REASON for being cranky, but I’m on the fence of it being a good excuse for it. I try to own my mistakes as much as possible.

We have to constantly make import health decisions all day long and even if we’re right 95% of the time we will sometimes be wrong. It can be frustrating when we’re off in our estimates for anyone to infer the right choice was obvious.

When I’m low I really just like my wife to be around/aware just in case I lost consciousness (never happened so far). Other wise I just want to eat some carbs, lay down and quietly wait for my sugar to start going up.

For what its worth since getting a Dexcom I’m much better able to take action on a low before it goes too uncomfortable.

Laying down wouldn’t help me fight a low bg. I need carbs. Heck I can be low at night. Laying down has no bearing on my ability to fight off a low. I don’t know how you do it.

If I am low and am very active, my wife gets on me to at least sit down, which I MIGHT do, but I’m often so busy that it is hard to do that. but without ingesting carbs, I can’t just wait it out.

@Dave44 I 100% agree, if I’m low I definitely take carbs but then sit or lay down until my sugar rises or at least stops going down. I’ll edit my comment to make that clear, I never try to wait out a low.

I would love to hear some good responses to tackle this,

Instead of tackling the poor reaction, have you had discussions when you are not low, where you explain how you prefer for them identify and help you, possibly preventing low in the first place.

Sometimes I just use the phrase “I need a time out to treat low, can you help me by …”

Of course prevention or early detection with bg testing or cgms can lead to avoiding it from being a big issue.

Oh gosh, Michelle…my cousin does that, too. “What happened, why, how can you fix it so it doesn’t happen again?” Well, I can’t, it’s gonna happen again, I do my best to avoid lows, but I always carry glucose tabs with me.

And, this cousin does not get it when I say I’m going low and instead of driving around looking for the perfect restaurant to eat at, we need to just PICK ONE, ASAP! Grrrr.

Instead of tackling the poor reaction, have you had discussions when you are not low, where you explain how you prefer for them identify and help you, possibly preventing low in the first place.

This is what I was going to write, but @MM1 beat me to it. One of the things that I would raise is that hypoglycemia impairs the brain, including social skills and politeness. If I am really low, I would request loved ones to get some quick acting glucose, place it directly in my line of sight and say something like, “You’re acting low, eat/drink this!”

As @Michelle43 said, asking questions of someone in the throes of hypoglycenia is confusing, irritating, and most of all, ineffective. The time for questions is after the event.

Loved ones need to be reminded that when you’re low, you are not yourself. Request that they please discount any hurtful things you might say.

You probably don’t want any of my suggestions for what to say to the people around you.

I would! I need new ammo…

Thanks Michelle43, I always cringe at the, “What did you do to cause this?” responses.

Ugh, so sorry you have had to hear those words. I detest those responses too!

I do appreciate this but please understand that lows are unavoidable especially with tight glucose control. I hate this as much as we all do but unfortunately even with excellent care and help of cgm’s and closed loops we will still get lows. I think this thought confuses my parents and boyfriend even more because now I get, “Isn’t this thing supposed to turn off?” Haha

People have kind of this standard model of a disease as something you get treatment for and then you’re better. So we’re getting treatment—insulin—so why aren’t we better? “Oh, you still have that? I thought you were taking something for it” is the assumption. If your medication isn’t working, maybe it’s not the right stuff, or the diagnosis isn’t right, or whatever, but there must be something you can do about it. You can explain why that that model doesn’t fit this disease, and while you’re talking the other person will kinda-sorta get it, but it’s hard for them to set aside the default way of thinking about this sort of thing. And what really throws the monkey wrench in is that, except in the relatively rare case of DKA, if we’re having symptoms it isn’t the disease that’s causing them, it’s the treatment.

In my experience that’s the hardest thing for people to get their heads around, even if they are relatively informed about health matters in general. So you get things like, “If you eat that cake, are you gonna pass out?” from otherwise intelligent people because the assumption is that if you have a disease, it’s the disease that’s the problem, not the stuff you’re taking to make you better. And it’s no help that this confusion is reinforced in countless films and tv shows by our favorite trope, “That Diabetic’s Gonna Need A Shot!”

Maybe a good analogy to use would be that from the day you’re diagnosed and for the rest of your life, you’ve been sentenced to be a tightrope walker, even though you were never trained for it, and you’re never allowed down off the rope. You’re always teetering back and forth, and over time you get better at it, because you have to, and you have tools to help, kinda like how real tightrope walkers have that pole they use to help them keep their balance. But unlike them you never ever ever ever get to take a break, climb down and just walk along the road like anyone else. And no one, not even the best tightrope walker in the world, could stay up there for every single moment of their lives without occasionally losing their balance. It’s just not possible. So even though we work at it really hard, we’re going to wobble or get blown off every once in a while. There’s just no human way to avoid it.

Thats ultra frustrating. Do you have any real life friends with chronic illness that you can vent to? They come HIGHLY recommended. Even if they aren’t diabetics - anybody with chronic illness may have a better understanding without every little thing needing explanation. I think its useful to seek those people out. You need them. You sound like u have some anti-support group people around you. In my late thirtys, I have very few of those people left around. I have gotten rid of them, although that might sound severe. I am much happier now.

I found it useful to become a volunteer EMT, because they are naturally pretty good, understanding people to have around. I do lots of art exhibits related to health and illness. Find some way to establish a community around you that accepts you and the additional challenges you face. You may need people who are tougher than most because you, yourself are. Seek out people who have overcome challenges. Those are your people. The people who condemn you are probably not the type who would survive in your shoes. They are weak and should have your pity.

Maybe you need some type of a man if your life (maybe not a boyfriend), but a male friend to tell those people to go to hell. That really helps - a disapproving stare from an intimidating male friend. I wish we could hire one for you. Have you been to any diabetes meetups around town? Do you have those? I forget, are you in CA? 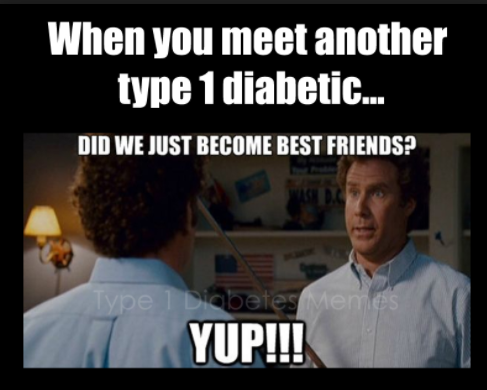 do appreciate this but please understand that lows are unavoidable especially with tight glucose control.

Thats why its your job to educate them, while you’re not low.
You also have the right to choose how tight you want your control, and may influence frequency. That’s your decision, and the consequences you need to balance.

Continue to try and help them understand, maybe explaining the long term benefits of tight control, but happen to be offset by the lows.

Personally, I keep slightly higher targets than what a non-diabetic has, to enjoy a more normal routine less impacted by frequent lows. Not sure what your goals are, and frequency of low events. You need to find your balance, and works with the people you love.

I would say: “Every time I have a low blood sugar my life is at risk. I value my life too much to take chances with it for something so petty as getting attention. If I really want attention I will choose a safer method like streaking- that would get me a whole lot of attention with less risk to my life. So until the day comes that I’m running down the street naked, let’s just assume that I’m perfectly happy with the attention I’m getting and that my hypoglycemia is truly a medical concern.”

Or
“Oh yes, I just love having cute paramedics come and hover over me when I’m not looking or acting my best, treating me like the QUEEN that I am. It is so much fun!!” (Just in case you don’t realize…sarcasm)

Or
“Really? You really think this is fun for me to being dealing with this and then hear how I’m using this to get attention? If I was blind and deaf would you accuse me of wanting attention when I need help with something? Why do you think it is any different with diabetes? Trust me, if I wanted to stand out in a crowd, I wouldn’t want it to be for my diabetes.”