Some problems with Afrezza

I’m T2 since 2000, last A1c of 7.2, (71 yrs old, 5’9", 158 lbs). I’m on 2000mg metformin and 10u Lantus. I typically eat 25-35 gms of carbs per meal. On May 8, after passing a spirometry test, I got a one month’s supply of 4u Afrezza samples (three packets of 30 carts each) from my primary care physician. For the first 3 weeks I was having pretty good results with a protocol of waiting 15 min after starting a meal to inhale a 4u cart if my BG was <120 and inhaling at the beginning of the meal if my BG was >120. Typically, I would take a second 4u dose if my Bg was >160 at one hr. Since I don’t use a CGM, I didn’t always catch a rise over 160 but most of the time my Bg has stayed less than 150 post-meal. That was until I opened the third package of 4u cartridges. Many of the cartridges in this package are not acting the way those of the first two packages did.

I have attached a graph of one of my Carb challenge controls to illustrate my problem:
Pecan Braid #2.jpg 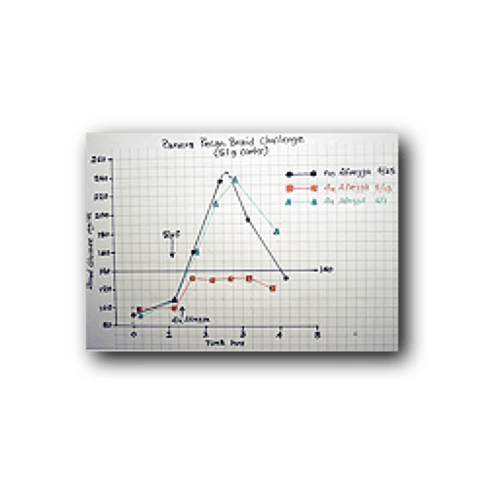 f3716c6c3af908d26719a19a3c03d04c920e2d1d.png512×512 128 KB
Clearly my 4u of Afrezza on June 1 did nothing to blunt my BG spike from the 51 gms of carbs in the panera pastry compared to the May 13 results. It does seem that some of the cartridges from this third package are having their intended effect but certainly not all. I see my doctor on Thursday and will show her these results.

My question is: Has anyone else had similar problems with any of their Afrezza cartridges? I will continue to make some additional tests using other carb challenges and report on them.

I would call Sanofi customer service at 1-800-633-1610 and report your concerns. As we all know, from pumps to infusion sets to insulin pods, etc there have been quality control issues. Maybe you got a bad batch??

Brian- Thanks for the Sanofi number. Here is a better jpeg of my results 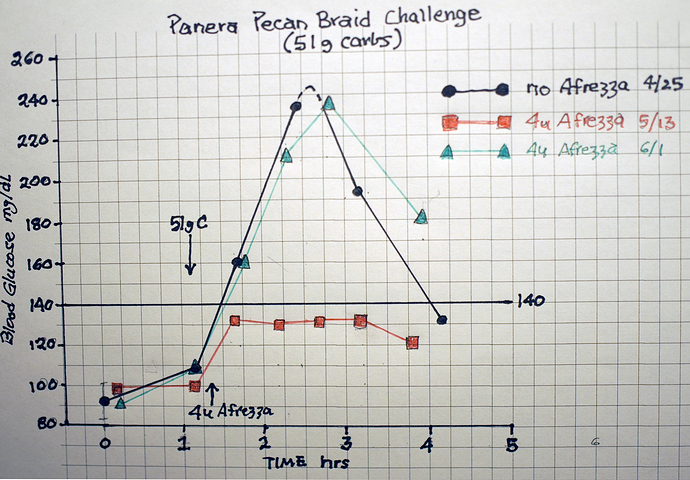 Sure looks like it isn’t working. Is there some way of verifying that there is powder in these cartridges? Did it feel like you got powder when you inhaled?

Since they were delivered with the earlier boxes, you wouldn’t think there would be a problem with exposure to excessive heat or freezing before you got a hold of them as the others worked. Were you storing them in the fridge on a shelf that might have frozen? (And would freezing damage this kind of insulin?)

Looking forward to hearing what Sanofi has to say.

BTW, looking at your post again and your response to 4 u of Afrezza it struck me that NO way are you a Type 2. Those doses wouldn’t make a dent in the blood sugar of a real Type 2 and you are pretty slender, too. Did your doctor test you for antibodies to see if you have LADA, the adult onset, slow autoimmune form of diabetes? If you do you would qualify for a pump on many insurance plans.

Jenny, thanks for your comments. Yes, there is definately powder in the cartridges- I can see residue and feel it when I inhale. I stored them in my fridge, with no possibility of freezing.

I’ll check with my doctor on Thursday about LADA and post if I get anything useful from Sanofi.

My previous post was deleted because I was told I was ‘calling other posters names’. I would like to get the chance to set the record straight. I am not calling anyone names but simply referring to a well known financial commentator (Psycho Analyst or PA) who is widely believed to be a frequent poster on this website.

I encourage readers to read commentary on Seeking Alpha (a well known financial website where PA regularly posts) and see if you recognize a writing style.

Starting with my personal favourite: 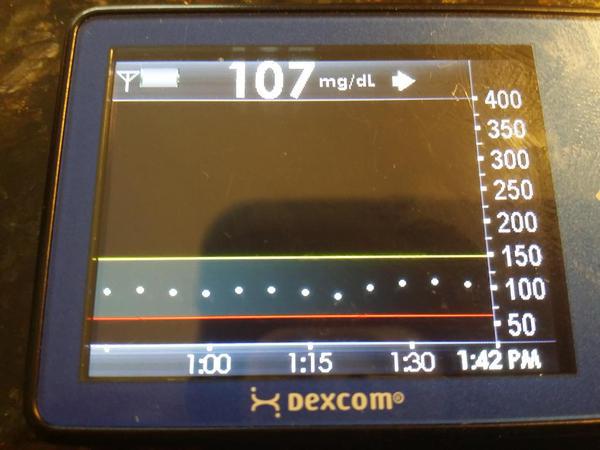 The Afrezza launch was officially announced this morning. Comments on investing boards suggest that investors will be disappointed if they don't see strong sale

A New Price Estimate Now That Afrezza Is Launching

People report that Afrezza is available at selected pharmacies. Sanofi appears to be launching according to the stated schedule. We have come up with a set of p

@Pax: I understand where you’re coming from. Regardless, so what?

Name-calling is simply not part of this community. Please don’t do it. Most of us genuinely don’t care about, or for, such side-shows.

I have used lots of Afrezza cartridges and never had any problems. I would call the manufacturer right away!

He wasn’t calling her names, that “name” is a screen name he believes Jenny uses on another forum… Which seems likely to be the case, though I’m not sure what he’s trying to prove by pointing it out… So what if she posts on diabetes forums and finance forums… A lot of us share those interests… “A well known financial analyst” is a bit of a stretch though-- seeking alpha is a forum not terribly unlike this one where members (with no qualifications or credentials) can write articles and then others read and comment on…

I’m a member there too though don’t post my own articles and rarely if ever have commented on anyone else’s.

Back on topic— I’ve only had a couple doses of afrezza where I wondered “what the heck happened there” because my bg went unreasonably high with no apparent explanation. All I can think is that perhaps once in a great while it just doesn’t get inhaled properly…

Have you got your afrezza yet, Dave?

I called Sanofi and they are sending me a mailer to return the remaining cartridges from the opened package. I will send my chart of the Panera pecan braid challenge also. I did see my doctor yesterday and was told that a Sanofi rep said another Afrezzar user in St Louis reported similar results as mine on one package of Afrezza. I have not heard similar problems from any other Afrezza users so I would think that this should be a fairly rare occurrence. Bottom line, keep on top of your BGs.

I hope to get a GAD test for antibodies later in the summer after a trip to the UK.

By the way PAX, if Jenny is your “well known financial commentator- Psycho Analyst”, then I’m the Easter Bunny.

Oh yes- almost forgot the best news. My latest A1C was 6.3 down from 7.2 about 4 months ago. And this was after being on Afrezza only the last 3 1/2 weeks. I can see getting in the 5’s before too long if I can continue my Afrezza use. I will probably have to pay upfront, siince it may be awhile before my Medicare advantage plan gets it in their formulary.

That is a really fine improvement. I’d send the data to the appropriate department at your insurer if possible, as it will take some real effort on our part to make them aware of the benefits this stuff can provide.

Is Sanofi going to replace the cartridges? Or did you get more samples from your doctor.

I hope the varying potency issue is not an ongoing issue, though I have had so much trouble over the years with insulin going bad that I know it is a problem with all the injectables. When I first started using insulin I was using Ultralente because I could get it without a prescription at the pharmacy for about $28 a vial. It was very helpful as an addition to my low carb diet, but it was being phased out. So when it was finally discontinued, I went out and bought the last vials that were in stock at the local pharmacies, which was some five or six vials. But none of them worked when I got around to using them. I was told it was probably because I stored them in the door of my fridge and it vibrated strongly when it was shut because it had heavy soda and milk cartons in its shelves.

Oddly, you can still buy Ultralente for your pet. At one point I considered seeing if I could get some because it worked so well for me, but I never did.

Sam, the blister pack was opened only for 12 hours. And it was more than one blister pack involved. I just think it was a bad batch od cartridges.

Sanofi may send more samples to my doctor. And I did get three more packets of 30 4u carts each. And so far all I have inhaled are working as I expect.

I thought of you when I passed by a Panera Bread recently. Those braids are tempting, but I went to DD and had a donut hole instead.

Actually I have a hard time eating the Panera pecan braids because they are so sweet. I guess I been low carb for too long.

I’ve always loved pecan rolls. When I was eating very strict low carb, which I did for about 7 years, I used to have dreams at night about finding bakeries that had the perfect pecan rolls, but something would always come up so I’d never get to actually eat one in the dream.

Now that I’m old, though, that kind of dough gives me terrible heartburn, and the calories are way too high, too. So I have one maybe 3 times a year and that reminds me why I don’t eat them the rest of the time.

Hi. I came across this post when I googled about problems with Afrezza. I am having similar problems to what dunewalker mentioned in the first post about 2 years ago.

A little background on me. I am a Type 2 diabetic, diagnosed in 2009. My doctor recently put me on 4 units of Afrezza when my A1C climbed to 6.9. This was back in April of 2017. When I first started taking it, the Afrezza worked great, with maybe a few days of adjustment. I used it for every meal and most of the time my morning blood glucose would be lower than my fasting. (I also take 1mg of Gliperide in the a.m. too). However, around the first of July I took a trip to New York and forgot my inhaler. I had my insulin and no inhaler and no CVS in the city had it available for me to get an inhaler. So, I went without my insulin for about 3 days. When I got back it seemed to be working ok for about a day. Now, though my BG readings are reading as if I haven’t taken my 4 units of Afrezza. This morning my fasting was 94 and after eating 53 gms of carbs I was over 200.

After reading through this post I am perhaps thinking I may have a bad batch too? It’s the last of my 3 month prescription. I have a new one at the pharmacy for me to pick up today.

Just wondering if anyone had any thoughts on this. I know it is 2 years since the last post on here but hoping someone sees it.