Hello,
I’ve been on the Omnipod for about 8 months now. I’m having a procedure done in a couple of weeks. My Dr told me to use the Temp basel rate but not
sure how to use it. Any recommendation will be helpful.
Thanks

I suggest that you do a few rehearsal runs. Write things down so you can make some cause and effect conclusions. I’m assuming that your doctor’s advice for temp basal rates is in response to fasting for the surgery.

You have the luxury of time; use it to simulate your expected routine on surgery day. You could start, for example, with skipping breakfast _without cutting basal at all and see how that works. A well-set basal should allow skipping a meal without going low or high. You can use your surgery as an excuse to fine-tune your basal rates.

Check out your Omnipod Users’ Guide. It has a whole section on setting temporary basal rates.

Sorry, I don’t know the system Omnipod uses. And the wording can be confusing. Some pumps, for instance, when increasing a temp basal rate by 10% will use “+10%” while others will say “+110%.” If after reading the user guide and you still have questions, perhaps a call to Insulet customer service would get you the most accurate info.

Others here may be able to give you more descriptive instructions.

It’s pretty easy. Try it now with these simple steps. Just make sure you cancel the temp basal after you test it.

You can have a preset temp basal, but the easiest steps are these: 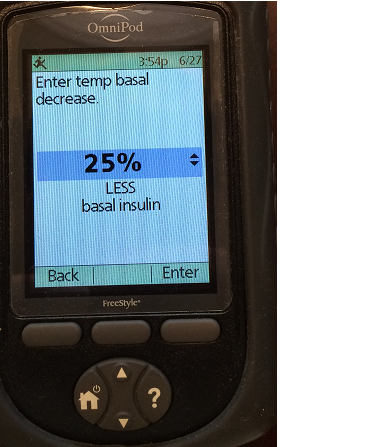 It’s that easy. Let me know if you have questions!

So, just in case - it may look like this. 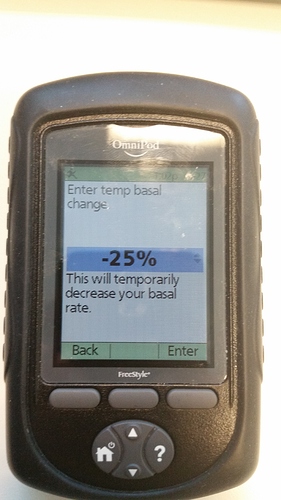 That’s odd. What version of the PDM do you have? Are you in the U.S.?

Cool, you have the Canadian version!

Thanks Eddie, It was really easy. Thanks alot everyone i really appreciate
it.

Yes that is important to know whether you are increasing or decreasing the basal. I am having a procedure done on Monday and if I have higher bg I will so a temp basal increase.

Hello,
I’m pretty sure i’m decreasing the day before the procedure because i’m on
a
liquid diet and then on the day decreasing cuz i can’t have anything until
after
the procedure.

Ok…you can set how long the temp basal will last. You go to the status screen the select temp basal it will ask deccrese or increase select which on you want give the %and then for choose how long you want the basal to last for.

Best wishes on the procdure.