I recently got a new prescription for levemir. It was different than the old pen design. The drum where you would "push" the plunger to deliver a dose is now internal. So no more having this screw out about 2 inches if needed. It rotates on the inside of the drum.

Has anybody had any issues with this new design? I had to go back to the pharmacy with 2 of my pens because the it would not rotate and deliver the dose. We tried new needles and different unused sites of inject. No avail.

As of last Sept 30th of 2014 Novo Nordisk discontinued the Flexpen and it has been superseded by the "Flextouch." I renewed my prescription in October and thought I would get the new pens but I didn't. I'll be interested in peoples experiences.

I've been using this new Flextouch pen for about a month now. I prefer the older Flexpen. First of all, this new pen is bulkier. I don't like that. Also, with the older Flexpen, I liked that it clicked with dosage so I knew by sound of clicks. This one seems alittle awkward with dosage as clicks are not as prominent. The injection delivery seems quicker, but the dial that you rotate seems like it can get stuck so I would not be surprised to see this new pen not delivering the dose due to a malfunction. Yes, I, too, am interested to hear other experiences with this new pen.

These pens are crap! They get stuck and don't deliver a proper dosage. I will start bringing them back to the pharmacy and get a new set.

Does anyone have Novolog flex touch? I just got my first batch of levemir flextouch. I only take 16 units per shot, but I do like the new feel.

This new pen doesn't click with each unit? Ugh. I hope Canada sticks with the old pens. The fact that it doesn't click would make the pens inaccessible to people with visual impairments - and insulin pens are about the only diabetes equipment that is accessible (meters, pumps, CGMs, ketone strips, diabetes software, even syringes are not accessible), so the fact that they are moving towards non-clicking pens and digital pens and such is really concerning...

Ah, well that's good that they click when dialling up! Though I agree, I like being able to count down when the dose is being delivered to confirm that it's the right amount, too.

Let truth be told. I don't like this "new" pen and I hope they get rid of it. I have had to do multiple pricking to deliver dosages because it got stuck.

Hi Christalyn. Once a pen is behaving too badly, the easiest thing to do is to remove the insulin from it with a syringe. In fact, that's the only way I remove insulin from my 2 pens, Levemir and Apidra. It's always accurate.

I do not like this new pen style. It seems that if you have scar tissue or some stubborn skin it will not work. Because I don't advertise my diabetes at work I find this difficult when I do need to inject. This is not a quick process for me to do this.

Is there different versions of the flextouch pen? The ones I have with Levemire clicks with each unit added. Not only that but the black on white markings make it much easier to see the dose in dim light. I love the change and wish I could get the flextouch in my Novolog as well but it still come in the old flexpens.

Agreed. I was skeptical of the new flex touch design at first but have grown to love it… It’s probably most beneficial for basal since that’s often more units at once than a bolus dose… I just saw that they now offer novolog in the flextouch as well? I hadn’t been aware of that-- might look into it

I’ve used the Flextouch and am happy with it. The big advantage for me is that I can inject in a broader range of landscape since you only have to lightly touch the button to inject. Previously I had to have some leverage to inject. This really helps when using the “backside.”

I haven’t used the new pens since I’m on a pump and also use Apidra, so I’m not sure about different version. In Canada, though, we typically use refillable pens that have refillable cartridges rather than the disposable pens. I wonder if these are available as refillable pens.

I wonder if these are available as refillable pens

I saw a picture of one taken apart-- it’d be difficult for me to imagine how they’d make it refillable bc it relies on a pretty heavy duty spring mechanism— which is what launches the pre dialed injection - once you pretty much just tap the button it dumps quite quickly. I also notice less dripping off the end of the needle afterward with this than with previous designs… Just seems like an overall improvement. 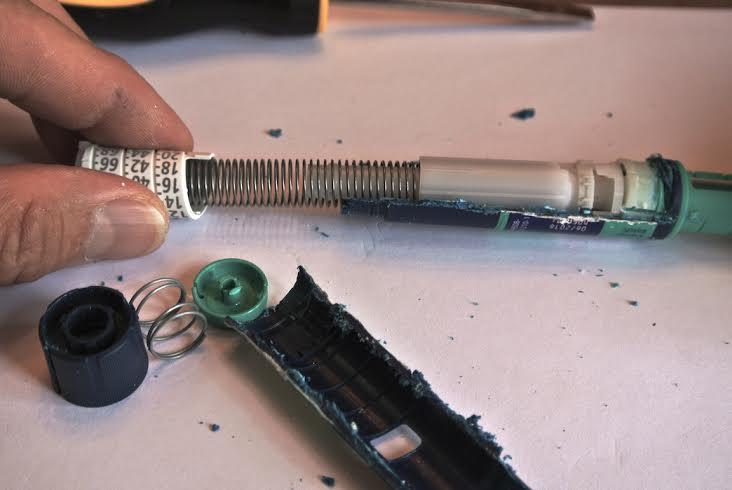 I’ve been using the new pen for over a year now. I prefer it. I do have a question though. I take Levemir - 40 units twice daily - and carry it with me for my nightly dose while at work. Tonight I discovered that I only had 20 units left in the pen. Can I make up the difference with my Humalog which I take with meals? Or should I just leave it at 20 units until my dose tomorrow morning?