With regards to the T-Slim or Medtronic pump infusion sets, when you remove the tube for whatever reason (ie swimming), are there caps for both the end of the tube where the needle is exposed and the part taped to your body where there would be a “hole” left open for the tubing end to click into/attach to?

Sorry I am not well versed in the tubed pump terminology, but I can’t find this information online, and I am considering switching from the Omnipod to a tubed pump specifically to see if I can utilize more “landscape” with different canula sets (angled or strait and I believe maybe plastic or metal??). The Omnipod (so far) has only one canula set option, and I have only had success using my stomach and arms (although arms hurt a bit).

Yes and no. I’ve only used Tandem’s Autosoft 90 and Autosoft XC (my preferred of the two), and each box of infusion sets does indeed come with two spare caps to plug into the infusion set when you remove the tubing. They look just like the end of the tubing, but without the tiny needle. To be honest, though, I think they’re rarely used except for by newbies and nervous parents. There’s a resounding “no” answer whenever I’ve seen the community polled about their use. There’s a seal, like on top of an insulin bottle, that prevents contamination into the infusion set. Though, I’d probably still use it when tempting the fates in known dirty water, like oceans/lakes.

There is no such cap for the tubing end, but the tiny needle on it is surrounded by plastic. It’s pretty much impossible to harm anyone with it without intentionally trying. And it being exposed really isn’t a concern as that needle never penetrates you. I have heard of people who save the plastic part of an old infusion set to be used as such a cap, though. 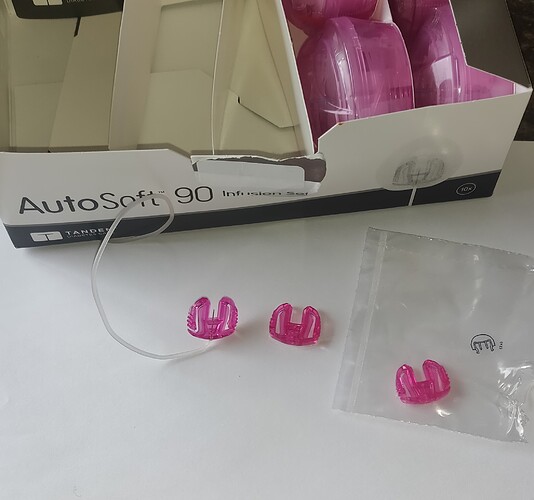 @Robyn_H thank you for the thorough explanation and picture! That all makes sense. I am definitely anxious about the idea leaving an uncapped needle sitting out if I needed to detatch…so I if I do go the tubed pump route, I will look into that tip of using “the plastic part of an old infusion set” in place of an actual cap.

I use the Medtronic Quicksets, and there is no “needle” left uncovered when you detach for bathing or swimming. The canula remains in your body. they come with caps to put over the site when you detach, but most of us use them only when swimming…not when just taking a shower. You don’t want to get dirt, sand, or seaweed around the site when swimming, which could happen, and then it would probably clog your insulin delivery.

Also, when detaching for longer than the 8 minutes it takes me to shower (i.e., swimming), I suspend the pump, so insulin isn’t leaking out from the tubing.

I clip on a cover to my site when I swim only. It keeps pool water out of my cannula.
As far as my pump is concerned I generally don’t cap it. I prime a couple of units. I prime more if I think it might have gotten hot.

If you use the Tandem 30 deg sets they do include covers for both the infusion set and the tubing end. They just clip on but don’t really seal anything. They would keep the needle away from things.